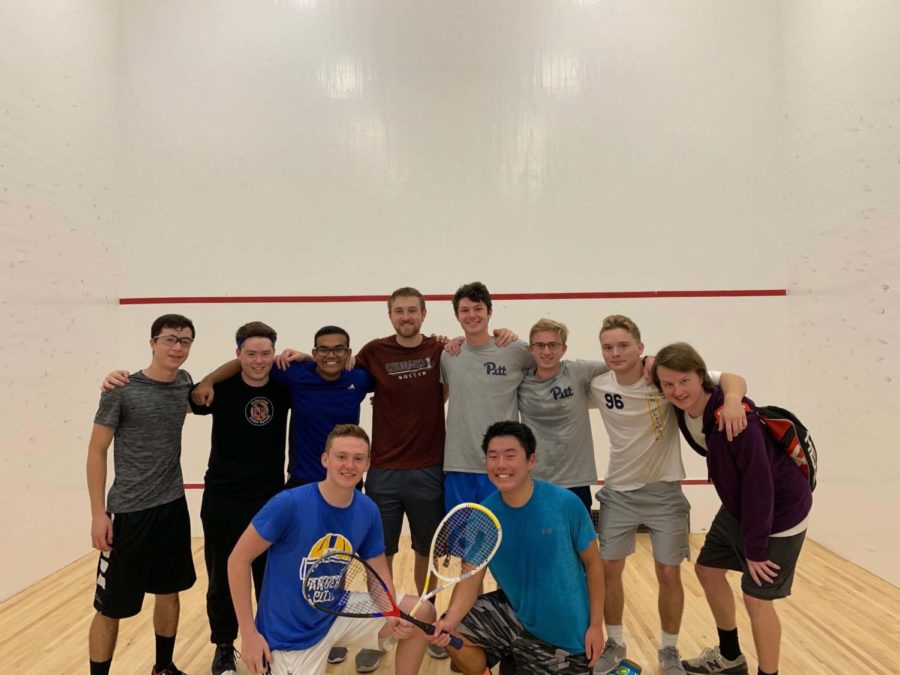 The Pitt club squash team has been around since last year, but just became competitive this season.

The racquetball-esque sport, confined to a tight court by four playable walls during competition, is anything but limited. It’s estimated that more than 20 million people play squash in 185 countries worldwide. While it tends to be more popular in Europe and the Middle East, the sport is also played by roughly 1.1 million people in the United States — and has gained a foothold on Pitt’s campus in Oakland thanks to a pair of underclassmen.

Lucas Haggerty and Peyton Stuart, both sophomores, had to spend a lot of time and energy getting the club team off the ground since last year. The team has only started competing with other schools this season.

“[Setting up] was brutal,” Haggerty said. “We had so much paperwork, different forms, club bylaws, our constitution and logo approval. We even did some of the forms wrong the first time. We had to get our roster together before all this, as well as an adviser … After all that, we also had to get approved by U.S. Squash.”

In the team’s inaugural match against Carnegie Mellon on Oct. 6, it fell to the Tartans 3-6.

“They’ve been set up longer,” Haggerty said. “Because of that longevity they’re a better organization. They aren’t just trying to fight through their first season ever.”

For those who aren’t squash aficionados, the name “squash” doesn’t come from the vegetable, but rather from the fact that the ball squashes as it bounces off the walls and floor. Each set is played to 11 points and must be won by two points. Points are scored if the ball bounces twice before being returned by the opponent, if a player hits it out of bounds or if the ball rebounds and hits the back wall before being returned. Interference can be called if a player gets in another’s way. Both players face the front wall rather than each other as they play.

The sport is played on an indoor court similar to that of racquetball, with a ball that’s about the size of a quarter. Players hit the ball with racquets, playing it off the floor and walls, either in a one-on-one or two-on-two format. Pitt’s team — which currently has 28 total players on the roster — sticks to the one-on-one format, and in matches sends its nine top-seeded players to compete.

“We don’t have the space for a doubles match,” Haggerty said. “Placement is key. You have to be aware of where the ball might bounce and move towards it before it gets there. We focus a lot on spatial awareness because of that.”

Haggerty and his teammates hope to simply improve upon their debut performance when they travel to Johns Hopkins University in Baltimore this weekend for their second-ever match.

Despite limits due to the program’s infancy, Pitt still boasts some select experience. Haggerty singled out praise for junior Clay Countess, who credits his success to having over a decade of experience.

“I’ve been playing squash for 11 years,” Countess said. “My dad played it when he was young and then taught me how to play.”

Countess was thrilled to see that Pitt finally had a way for him to play competitive squash. He had continued to play at courts Downtown, but an on-campus club made his childhood passion even more accessible.

“I’m really excited for this team and to see what the future holds. Hopefully we can get better facilities at some point, but for now we’ve got a great group of guys and girls and I want to see what we can do with it,” Countess said.

Trouble with the facilities was a common theme, as Stuart worried about the team’s accessibility to prospective fans.

“The courts are super hard to find,” he said. “They’re on the wrestling side of the Fitzgerald Field House, but there aren’t any signs showing you where to go.”

It’s clear that there’s still a ways to go before Pitt club squash can achieve the success of more established programs. But for now, the team is focused on laying the groundwork for a culture that maintains stability for years to come.

“We saw as we set the team up that good organization is crucial,” Haggerty said. “We have to lay a strong foundation. No matter how popular a club is, it won’t last if it isn’t organized well.”

Recruiting is essential to the strong foundation that Haggerty outlined. This can be difficult for any new club, but particularly for the team of a relatively unknown sport like squash.

“Recruiting was half-and-half. Some members had played squash before and knew what it was, others just went out on a limb and decided to give it a shot,” Haggerty said. “It’s a lot of fun once you get into it … it’s a dynamic sport and you can get good at it quickly.”

Besides playing the sport, Haggerty occasionally watches professional squash in his free time as well.

“When I first got into the sport Nick Matthew was a big inspiration. He’s retired now but he was pretty good in his prime,” he said.

Matthew, who played professionally for 20 years from 1998 to 2018, won the British Open and World Open — squash’s most prestigious events — three times each and was ranked the best player in the world for a time.

In his role as team president and lead recruiter, Haggerty wants to do what Matthew did for him and make the game accessible for anyone curious about playing.