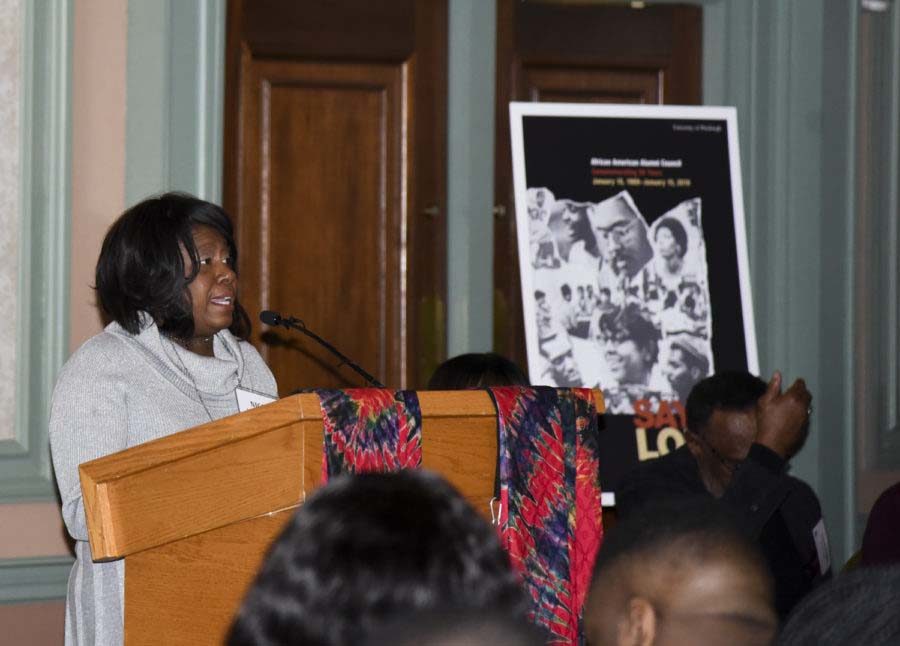 Pitt alumna Linda Wharton is celebrating a special anniversary this year — 50 years since the Black Action Society sit-in that helped expand the black student body and found her a place at Pitt.

She was one of the many African American students recruited by the University after the sit-in, fulfilling one of the protesting students’ four demands — that they make an effort to bring more black students to the University.

This weekend, Wharton and about 2,500 other black Pitt alumni will return as part of Pitt’s African American Alumni Council celebration of Homecoming and the 1969 sit-in.

Wharton, the chair of the 50th anniversary commemoration committee and a former AAAC president, played a large part in planning this weekend. The celebration, known as “Blue, Gold and Black; Say It Loud From Uprising to Still Rising” Sankofa Homecoming 2019 will feature everything from a tailgate before the football game at Heinz Field, to a banquet and even a step show. Homecoming weekend is packed with AAAC events in honor of the anniversary. A new book, “Say It Loud,” will launch this weekend with a collection of oral histories from people directly involved in the sit-in.

The anniversary weekend kicks off with the 14-year-old Apple Seed Project, where alumni will visit elementary, middle and high schools in Pittsburgh and talk with kids about their futures and possible career paths. Wharton said this visit is very helpful to these students, some of whom still stay in touch with alumni now as adults and let them know about their current careers.

“It’s our service back to the community,” Wharton said. “We share what we learned at the University with them.”

AAAC is also collecting items for a time capsule, to be buried for the next 60 years. Items will be brought in for review this weekend.

“It’s important that people understand all that went into making the University as diverse as it is,” Wharton said. “The actions that were taken back in 1969 are responsible for a lot of us today.”

The Jan. 15, 1969, protest started when students asked for classes to be canceled in honor of Martin Luther King Jr.’s birthday, who had been assassinated one year earlier. The students also had four demands for the University — employ a recruiting team to attract more black students, correct the portrayal of Africans in history courses, increase the number and stature of black faculty and create a Black Studies program.

After visiting then Chancellor Wesley Posvar’s office, students decided further action was required and moved to the University computer center on the Cathedral of Learning’s eighth floor. They locked themselves for several hours in the center, which held important University information, until Posvar gave them a signed agreement stating that their demands would be completed. This protest created immediate change at the University, with the creation of the African Studies Program and more black students like Wharton being recruited.

“These students felt that they needed to be more represented in the educational experience at the University,” Wharton said. “It really was a well-planned movement.”

“It was a very racially charged time, a lot of things were preventing African Americans from being successful,” Parks said. “It allowed us to move forward and be more of a presence on campus and allowed people to see that we are as capable of success as any other person.”

Parks, a 1991 graduate of the Dietrich School of Arts and Sciences, said this weekend will be full of fun events for alumni. There will be awards presented to five distinguished Pitt alumni, as well as 13 young alumni who will be receiving the Rising Alumni Leadership Award.

“I feel that being in the alumni council helps me to give back to other students,” Parks said.

Nana Gyabaah-Kessie, a junior majoring in molecular biology and BAS member, is excited to meet with Pitt alumni this weekend.

“Seeing their excited faces and the way they interact with us as students is really refreshing.

You realize they were once students too,” Gyabaah-Kessie said. “They’re so open and welcoming.”

Along with the AAAC events this weekend, BAS is holding events of its own, largely focusing on black identity on campus. Its Monday general body meeting centered on defining blackness, and the annual Black University of Pittsburgh Pageant is Thursday.

“Throughout the whole week, it’s just a great time to be around people who look like me,” Gyabaah-Kessie said. “I’m reminded that this is where I belong.”

She added that being part of the BAS is very humbling.

“50 years ago, students just like me just wanted a place to belong. And they took action to make themselves belong and to make others see their struggles,” Gyabaah-Kessie said. “They did what they had to do to make a change on this campus. We’re continuing their legacy and trying to make it bigger than just being at Pitt.”