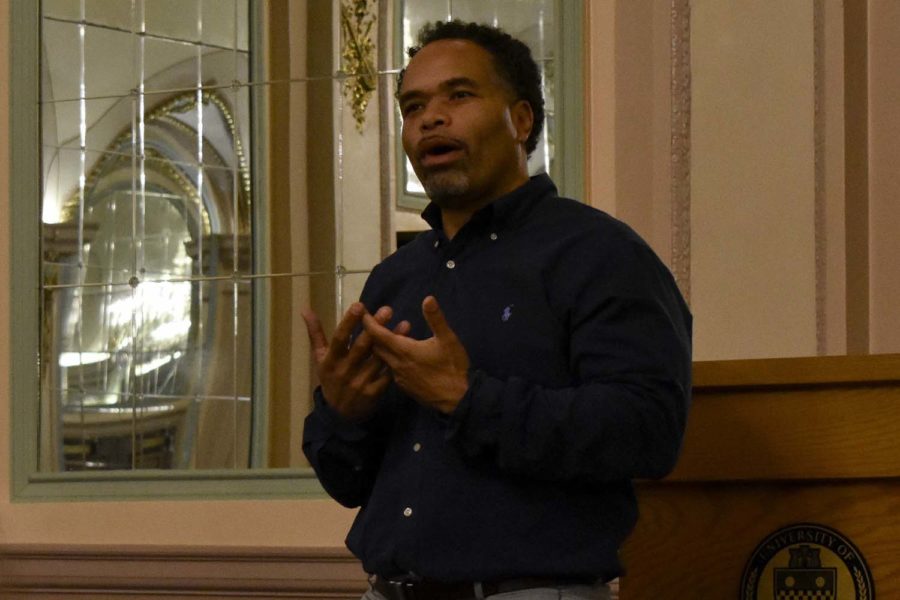 By Sarah Berg, For The Pitt News

There was only a small audience at the mental health vigil in the William Pitt Union Ballroom Thursday night. But according to Student Government Board member Eric Macadangdang, one of the event organizers, it wasn’t a large turnout that mattered — but the impact it had on those who came.

Macadangdang became involved in planning Mental Health Awareness Month last year, when he was the chair of the Wellness Committee for SGB. Before that, he said, he viewed mental health in a broad and abstract way. But working on organizing the month has helped him to spend more time reflecting on his own mental health.

Daniel Rudy, the president of the Resident Student Association and another organizer, said he had a powerful experience attending a similar vigil during his first year at Pitt.

“As someone who was struggling with my own mental health at the moment, it kind of opened my eyes,” Rudy said. “It showed me what conversation looks like on this campus about mental health.”

The vigil featured a set of speakers and performers of various positions within the University who added stories of their experiences and pieces of encouragement to the conversation. Speakers emphasized the different ways struggling students can reach out and get help.

“Mental illness is in fact an illness, and just like any other illness, it must be attended to. It must be respected,” she said. “And we must be sensitive to the issues that surface because of it.”

The University wants its students to be healthy in all ways, Humphrey said.

“Our goal at the University is not that you only thrive intellectually and academically, but that you thrive emotionally, physically, spiritually and mentally. That we have the tools you need to manage your entire life. We want to educate the whole person, so that each of you are healthy, safe, engaged, and successful,” Humphrey said.

Jay Darr, the director of the Counseling Center, detailed the services the center offers — including walk-in hours, Let’s Talk sessions, group services, individual therapy and other specialized services. He also spoke to the importance of being in the moment.

“I encourage all of us as we think about our own lives and how we move through this experience at Pitt, that we’re really focusing on how we can make present in order to reduce the stressors of the past and the future,” Darr said. “Remember, well-being is about being present and enjoying yourself right now, in this moment.”

Jahari Mercer, a recent alumnus who spoke at the event, agreed with Darr on the importance of staying in the present without getting lost in the future or past.

SGB President Zechariah Brown also spoke at the event, as did representatives from the Pitt chapter of Active Minds and Craig Hayes, a junior English writing major who performed spoken word poetry. The a cappella group Songburghs performed Alessia Cara’s song “Scars to Your Beautiful.”

In the future, Macadangdang hopes for increased involvement from smaller organizations as well as student organizations which are not solely focused on mental health. He also wants to improve ways of reaching out to students who are less likely to come to events like this one.

“It’s always easy to engage those who are already prepared to be engaged and people who already are prepared to come out to these events,” Macadangdang said.

Macadangdang said he thinks as Pitt continues to hold events that bring awareness to the issue of mental health, more people will be drawn in.

“Continuously doing these events and breaking down the stigma could open up the doors,” he said.