Opinion | One year later: Perspective from a Tree of Life congregation member 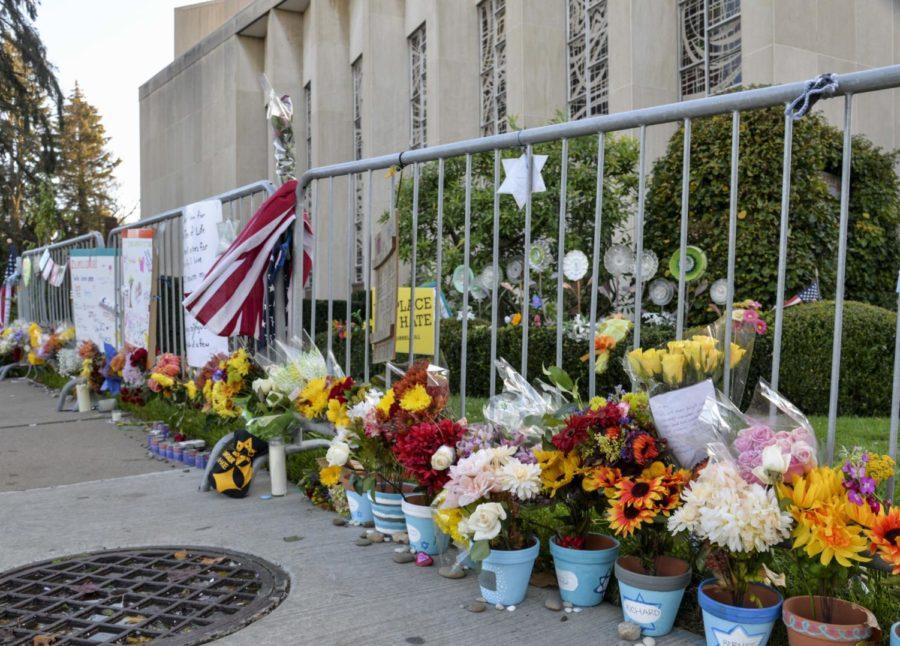 Flowers, candles and chalk drawings were placed outside the Tree of Life Synagogue on Sunday afternoon.

By Aidan Segal, For The Pitt News

Outside the doors of the upstairs chapel in the Tree of Life Synagogue is a glass case containing a Torah scroll rescued from Czechoslovakia sometime during the Holocaust. Judah Samet, a fixture at the synagogue, survived the Holocaust as a young child — his family escaped death in the Bergen-Belsen concentration camp.

Both Samet and the Torah scroll were witnesses to the most depraved, devastating act in history and, years later, on Oct. 27, 2018, they would again witness the unrelenting force of the longest hatred. Only this time it was not in Europe, but in a synagogue in the neighborhood of Squirrel Hill where an active shooter yelled, “All Jews must die,” as he massacred 11 of my fellow congregants.

Tree of Life*Or L’Simcha is my family’s synagogue. We joined in 2016, after I had spent my whole life going to Rodef Shalom, which is where our congregation has been relocated as a result of the shooting.

Just a few months before the attack, my little sister was bat-mitzvahed in the very sanctuary that saw the worst of the bloodshed.

The fateful Shabbat morning was disorienting and surreal, though I wasn’t there. I was home in my bed sleeping while the rest of my family was downstairs in the living room watching the news without even a clue as to what would soon appear on the screen.

As soon as the aerial shots of our synagogue on a dreary fall morning in Pittsburgh emerged, my older sister frantically raced up the stairs and woke me up saying, “There’s a shooting at Tree of Life.”

Sunday marked one year since the deadliest anti-Semitic attack in the history of the United States — what Mayor Bill Peduto would call the “darkest day of Pittsburgh’s history.”

While it was likely the most tragic incident in the City’s history, it was merely another chapter in ours.

Understanding anti-Semitism is as integral to Jewish identity as lighting the Sabbath candles or teaching children Hebrew prayers. Every year on Passover we read the Haggadah, which chronicles the Jewish Exodus from slavery in Egypt. “In every generation they rise up to destroy us,” the Haggadah says.

But in every generation “they” have failed. The fiercest of history’s empires who sought our extermination are in ruins today, But Jews, on the other hand, are still here speaking the same language, practicing the same religion and living in the same land as they did 3,500 years ago.

Out of the ashes of Europe with six million of our brothers and sisters viciously murdered, we didn’t wallow in despair, we fought and died for independence in our ancestral homeland in Israel and we got it. And should the opportunity arise, there are those ready and willing to do everything in their power to take it away from us.

Rabbi Hazzan Jeffrey Myers — my rabbi — is the face of that resilience. He saved four congregants in the sanctuary, then got them to escape through the back door before barricading himself in the bathroom as he stayed on the line with 911.

The responsibility of being the voice of such a historic calamity was thrust upon him with no time to react. With the eyes of the nation on him, he demonstrated the compassion and wisdom of Judaism, and what basic human decency looks like. He has handled every moment of it with the utmost class.

He has resolved that the fight against hatred begins with us and our language. In fact, he has even decided to eliminate the word “hate” from his vocabulary, calling it the H-word.

In an article featured in Time, he writes, “H speech frequently leads to violence, as it did in Pittsburgh and, alas, other places … If you don’t like something, I urge you not to say ‘I ‘H’ it.’ Rather, say: ‘I don’t like it.’ This simple act is necessary to restore civil discourse to our society, buffeted as it has increasingly been by too much uncivil discourse.”

He has become America’s Rabbi.

The first Shabbat following the shooting took place at Beth Shalom congregation, where more than a thousand people of all backgrounds came in support of our community. At one point during the service we sang “Hatikvah,” the Israeli national anthem which translates to “The Hope.”

Never before in my life did I ever feel more connected to world Jewry than I did at the moment. Listening to the beautiful Hebrew words echo all throughout the sanctuary while a family wrapped themselves in an Israeli flag overwhelmed me with pride and made me think about what a gift it is to be Jewish, to belong to such a people.

The 11 beautiful souls taken from us that day — Joyce Fienberg, Richard Gottfried, Rose Malinger, Jerry Rabinowitz, Cecil Rosenthal, David Rosenthal, Bernice Simon, Sylvan Simon, Daniel Stein and Melvin Wax — had that feeling every time they entered the synagogue for religious services. They were guardians of the faith — entirely dedicated to their religion and preserving this ancient and storied tradition — and they died for it.

And just as they died for it, we must live for it and never take it for granted. We are links in a miraculous chain and in the City of Pittsburgh, one year later, it is as strong as ever.

Write to Aidan at [email protected]