One year later, community continues to heal after Tree of Life attack 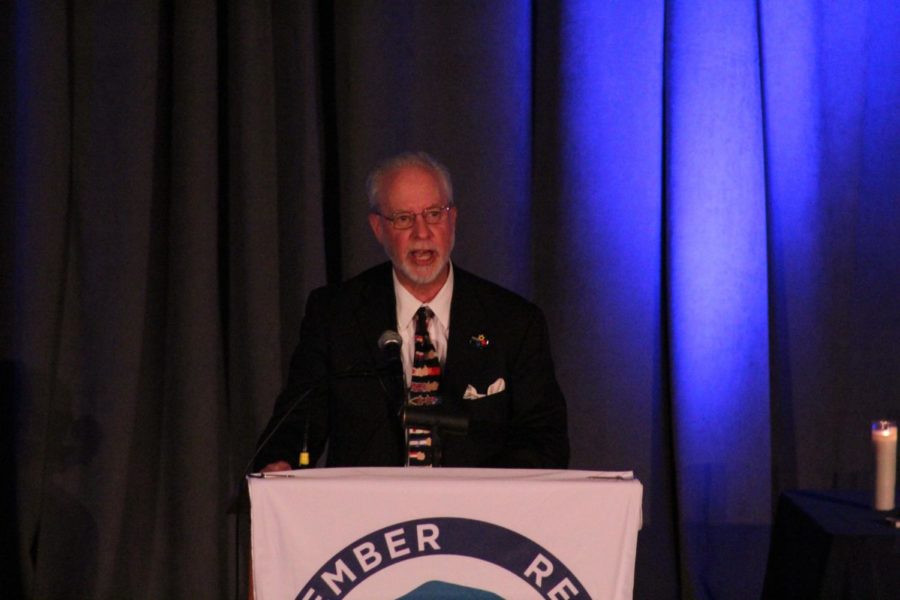 Rabbi Jeffrey Myers shared a message of hope for the future and encouraged audience members to focus on the positive in their community.

By Sarah Berg and Madison Brewer

Rose Mallinger loved to dance. Joyce Fienberg helped everyone she could. David and Cecil Rosenthal were called “the boys,” and were inseparable. In a video played at a large memorial Sunday, family members described their loved ones whose lives, and those of seven other Jews, were taken on Oct. 27, 2018.

In remembrance of the victims of the 2018 massacre at the Tree of Life Synagogue, more than 2,000 people traveled Sunday evening to the gathering at Soldiers and Sailors Memorial Hall for a community event involving speeches, prayers and music.

The Tree of Life massacre took the lives of 11 Jewish worshippers attending Saturday services across the synagogue’s three different congregations, located in Squirrel Hill — a close-knit City neighborhood known for its acceptance and tolerance. It is the deadliest attack ever on the Jewish community in the United States, according to the Anti-Defamation League, a nonprofit that fights anti-Semitism.

Rabbi Amy Bardack, of the Jewish Federation of Greater Pittsburgh, said the commemoration was created in line with the wishes of the victims’ families, who sat in the front of the hall, just behind the speakers.

“We asked them what was most important for them on this day, and three words kept emerging,” Bardack said. “Remember, repair, together.”

These three words served as the night’s theme — projected onto screens as attendees arrived, incorporated into the event’s logo and repeated many times by various speakers.

Jamie Lebovitz, a 54-year-old Mt. Lebanon resident who grew up in Squirrel Hill and volunteered for Jewish Hearts for Pittsburgh, said that she appreciated the focus on these phrases.

“The service meant so much to me because it wasn’t dwelling on … what happened last year, it’s where we go into the future, together,” Lebovitz said. “That was the message that I felt, was we need to work together and be together to move towards a better future.”

Lebovitz added that since the attack, she has experienced a renewed sense of engagement with her community.

For other members of the Pittsburgh community affected by the massacre, the future is a time to continue to grow. Shirley Christie — a 65-year-old Edgewood resident who knew Jerry Rabinowitz, one of the victims — said that she was appreciative of the event and hoped for more unifying community events in the future.

“It would be great if we had more of these things that unite people and if more people were to show up and be a part of things like this,” Christie said. “I hope that we won’t forget.”

Before hearing from the speakers, members of Pitt’s track and field, wrestling, softball, gymnastics and men’s basketball teams marched down the aisles of the auditorium. They placed 11 bouquets of yellow flowers into 11 vases, one for each lost life.

Abena Atuobi, a junior studying marketing and supply chain management and a member of the track and field team, said that she was grateful to participate in the event.

“Being an athlete, we put so much into our sport, but we also have to give back in the best way we can,” Atuobi said. “Being offered this opportunity to be a part of the ceremony is a big thing I never would have thought I would be a part of.”

During the gathering, a video of six of the victims’ families was shown. The other families did not wish to participate in the making of the video because, in part, they said it was too painful to be interviewed about their loved ones. In the video, family members describe their loved ones, with moments of lightheartedness breaking the somber silence in the room. The audience laughed as they heard that Rose Mallinger used to crash weddings to dance with her friends and that David Rosenthal was remembered as the “Mayor of Squirrel Hill.”

In addition to Jewish clergy and government officials, leaders from other faiths also spoke at the event.

Rabbi Jeffrey Myers, of Tree of Life*Or L’Simcha, said widespread support is what keeps him hopeful in the face of what he calls “h-speech” — the hatred he hears everyday that he said can lead to violent acts.

“My path … is to decry any and all h-speech,” Myers said. “If America is ever going to succeed, it will do so when everyone — and I mean everyone — is on this experiment called democracy together.”

The other two congregations are finding their own path for grieving. Anne-Marie Mizel Nelson, the daughter of the founders of Dor Hadash, said their congregation is slowly healing.

“Dor Hadash was wounded by this act of hatred,” Nelson said. “We are healing, and we are on our way to being stronger than ever.”

“We must not delay for the sake of the victims of this crime,” Perlman said. “We must begin to eliminate some of these weapons and figure out a way to keep weapons out of the hands of killers.”

But Perlman said he still has hope for the future.