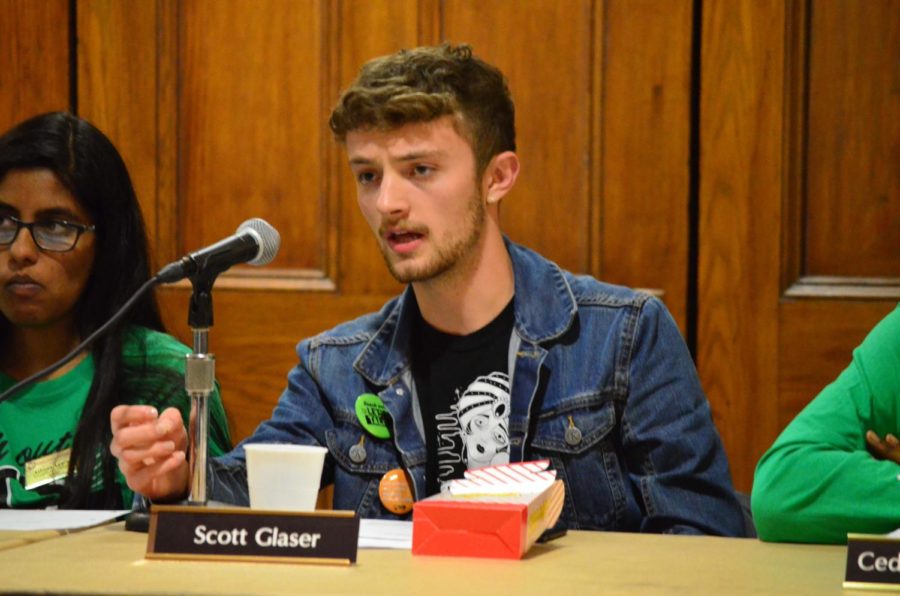 Student Government Board’s meeting Tuesday night began with a moment of silence offered by President Zechariah Brown to honor the one-year commemoration of the Tree of Life massacre.

The massacre, the deadliest ever against the Jewish community in the United States, took the lives of 11 Jewish worshippers attending Saturday services across the Squirrel Hill synagogue’s three different congregations.

But the board was not silent Tuesday night about federal gun control legislation, encouraging students to sign its Tuesday letter to Sens. Bob Casey, D-Pa., and Pat Toomey, R-Pa., to take action on several pending bills.

SGB member Scott Glaser said in his board report that he hopes the letter brings attention to this important issue.

“The nice thing about this letter is that there’s a way for all of you to sign on and feel like you’re a part of the letter as well,” Glaser said. “To urge them that their efforts to pass legislation in the past has not been enough, and we need to do more in the future.”

The letter called for both senators to vote in favor of legislation to require universal background checks, ban high-capacity magazines and reinstate an assault weapons ban. It further called on both senators to “be a voice for compassionate, commonsense leadership,” “denounce white supremacy” and respond to the concerns raised in a “constructive, meaningful way.”

“It’s really important to call out white supremacy and move forward with action after a year of not doing enough,” Glaser said.

This is not the first time SGB has authored a letter about gun violence. Last year’s board authored an open letter to representatives and lawmakers calling for stricter laws related to assault weapons purchases.

The letter is available on SGB’s Facebook page and website, and Brown said the names of students who sign the letter will be included when it is sent to the Capitol.

After the meeting, Brown provided an update on the SORC guideline changes that could affect hundreds of independent student organizations on campus.

SORC announced in late August that beginning fall 2020, its registration guidelines would prohibit the names of independent student organizations from including University trademarks or wordmarks like “Pitt” and “Panther,” instead encouraging clubs to use phrases such as “at Pitt” or “at the University of Pittsburgh.”

Brown announced in early October that the board’s proposal is to grandfather current organizations that have been on campus longer than the pre-existing, approximately decade-old naming guidelines have been in effect. All remaining organizations would have to change their names, but would be allowed to sell any merchandise they have already purchased to try and prevent any large financial losses.

He said the board has not finished writing their proposal, but added that it will be available Friday. Brown said the final proposal has been delayed for many reasons, including the board’s trip to Washington, D.C., last week for the ACC Advocacy Days, a multi-day lobbying event with Pennsylvania representatives to talk about federal support for higher education.

Other SGB board members and committee chairs provided updates on their respective initiatives.

He said the task force will be formalizing its structure and purpose over the next few weeks, but they plan to provide a way for students to voice feedback about Pitt’s Campus Master Plan.

Judicial Committee Chair Grace Nelson also provided an update on the work she and her committee are doing regarding University policy about excuses for missed work and absences for religious reasons. She said outreach to affected communities is ongoing, but not many students responded to the committee. Work is underway to create a “lower task” of students to increase responses, she said.

Pitt Club Field Hockey requested $2,366.40 for their fall national championship. The board approved in full.

Women’s Ultimate Frisbee Club requested $1,363.64 for their Expedition Romp in Fairfax, Virginia. The board approved in full.

Pittsburgh Intercollegiate Snowboard Team requested $6,650 for a trip to Whiteface, New York. The board approved in full.

Pittsburgh Intercollegiate Snowboard Team requested $6,850 for a trip to Killington, Vermont. The board approved in full.

Men’s Water Polo Club requested $2,000 for their national dues. The board approved in full.

Women’s Ultimate Frisbee Club requested $1,942 for their Delaware Classic in Newark, Delaware. The board approved in full.

Women’s Club Soccer requested $2,190.54 for a regional tournament. The board approved in full.