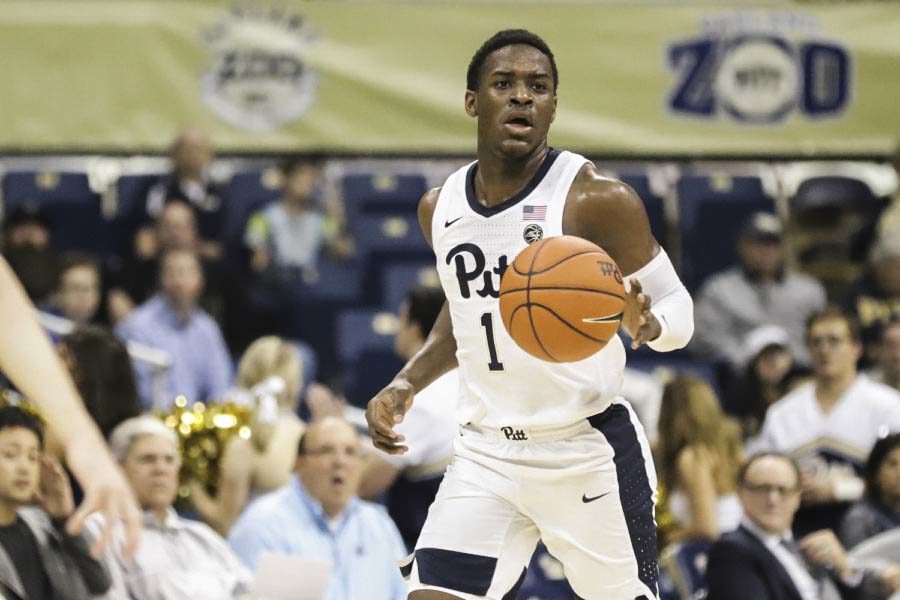 Last year, Xavier Johnson established himself as one of the premier point guards in the ACC by averaging 15.5 points and 4.5 assists per game, and was the only player in the ACC to reach both of those benchmarks.

Pitt basketball has undergone a major face-lift since its infamous 0-18 ACC record two years ago. A new head coach, new players, new colors and renovations to their home court and arena are all part of an effort to move past one of the darkest eras in program history.

And when the Florida State Seminoles walk into the Petersen Events Center on Nov. 6, they will be among the first to notice what sophomore point guard Xavier Johnson describes as “a completely different Pitt team.”

More specifically, junior forward Terrell Brown noted that from tip-off, their opponent will see that the physical makeup of the Panthers has changed drastically from last year.

But until the Seminoles arrive, head coach Jeff Capel and his players have a different focus. At a media session on Monday, their message strayed from the typical talk of strategy, skills and preseason preparation, instead fixating on maturity and growth.

Twenty-year-old Johnson in particular has shouldered the lion’s share of that growing. Last year, Johnson established himself as one of the premier point guards in the ACC by averaging 15.5 points and 4.5 assists per game — the only player in the conference to reach both of those benchmarks.

But with outstanding play comes outstanding expectations. Over the offseason, Johnson found himself among NBA mock drafts, mostly due to his freakish athleticism and speed. As a result, he has now had to narrow his focus to this season only and worry about a professional career later. To help with that, Johnson firmly shut down any rumors that he has considered a move to the NBA after this season.

“I get a lot of people telling me, ‘You’re up next,’ and this and that but I can’t worry about that,” Johnson said. “I gotta be better than last year.”

And the biggest way Johnson thinks he can get better is through leadership and communication. In pursuit of those goals, Johnson attended a pair of leadership conferences in Florida and Indiana, focusing on interpersonal communication between leaders and the people they lead, and picked up tips on how to better interact with his teammates in a new role.

“Last year … I didn’t really know how to talk to guys, but over the summer I went to a leadership conference and I learned a lot,” Johnson said. “[My teammates] all look to me as a leader … So now I talk a lot. That’s made a big difference.”

In basketball, point guards are expected to be an extension of the head coach. A conductor, director or general on the floor, guiding his teammates through both offensive and defensive schemes while still focusing on his individual game.

It’s a tall order, but as one of Pitt’s most seasoned veterans, Johnson will be expected to not only score and make plays at an increased rate, but also aid his junior teammates in navigating the peaks and valleys of their first year in college.

One of those baby Panthers, first-year wing Justin Champagnie, has already hit more peaks and valleys in his first few months at Pitt than most athletes do in four years. Champagnie suffered a knee injury in late September that doctors initially thought to be a torn ACL, but after further examination, was diagnosed as only a sprain.

While that was welcome news for Champagnie and his teammates, both parties have to readjust after coping with such difficult news for almost a month. Now, Capel says Champagnie is back to practicing at full speed and regaining trust in his body.

“Mentally, for him, you think your season is over with. And then three and a half weeks later you’re told, ‘You’re good. Get out there and go full speed,’” Capel said. “So it’s mostly a mental hurdle for him right now.”

The “mental hurdles” were a common theme for the Panthers during Monday afternoon’s media availability for good reason. The talent has been assembled, the skills have been honed, but the hardest challenge to overcome will be the most obvious — believing that they have what it takes to win.

Last year’s squad let almost-sure wins slip away from their grasp often — eight missed free throws and a -13 rebounding margin down the stretch against Wake Forest, folding to a hostile road crowd at West Virginia and countless losses in which poor offense doomed them. In many of these agonizing defeats, it was one or two plays that separated winning and losing, but those are mistakes Pitt can’t afford to make.

In the nation’s premier basketball conference, it’s easy to fall into the cellar and takes a monumental effort to climb back out. The Panthers have set lofty goals for themselves in 2019, and the belief and passion this team wields is essential to what they want to achieve. Programs don’t get anywhere by taking the cautious, calculated steps of analysts and Pitt knows that self-doubt will only hold them back.

They don’t boast any likely lottery draft picks or Wooden Award candidates like the upper echelon of the ACC, but after all the cosmetic changes his program has undergone, Brown and his teammates are eager to bring back the attitude and swagger of Pitt basketball’s heyday.

“I can’t wait for gametime,” Brown said. “We’ve watched other teams play and we feel like we don’t see why we can’t be on the top … We don’t see why not.”