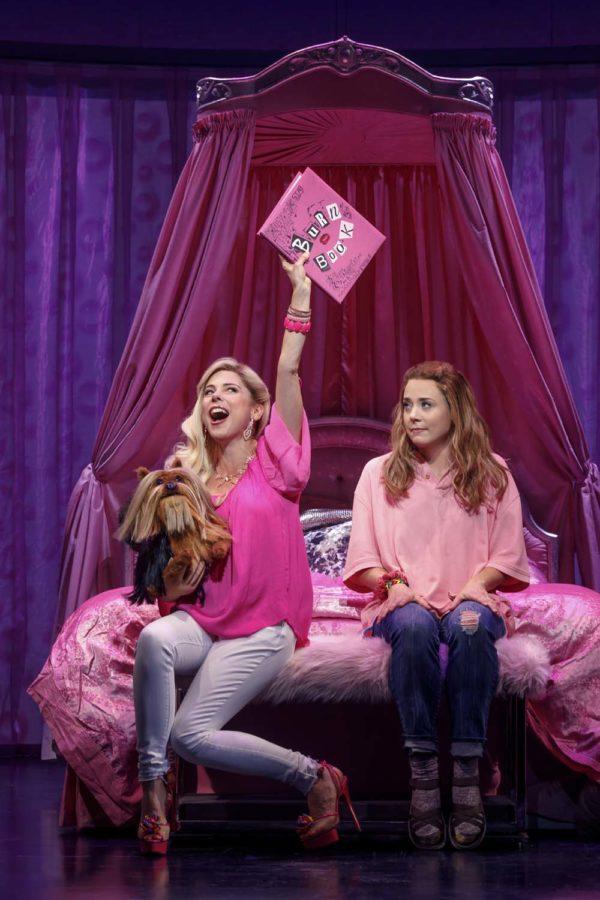 Pittsburgh Cultural Trust’s production of “Mean Girls” will run through Nov. 3 at The Benedum Center for Performing Arts.

Tina Fey’s 2004 movie “Mean Girls” is an instantly quotable classic. Generating tons of merch, inside jokes and a place in film history as arguably one of the best teen movies of the early aughts, “Mean Girls” finally got the musical makeover treatment and came to Pittsburgh Tuesday night.

Both the movie and musical follow Cady Heron, a new student at an average American high school who’d previously spent her whole life being homeschooled in Kenya by her biologist parents. Cady is quickly roped into highschool drama by her new friends, who encourage her to spy on queen bee Regina George by pretending to join her clique. Cady then falls for Regina’s ex-boyfriend, Aaron Samuels, which only causes further drama — and hilarity — to ensue. The movie was a staple in the lives of many tween girls, and the musical proves to be a refreshing take on a classic movie.

Though Cady, played by Danielle Wade, is the main character of both the show and the original movie, it’s the side performances in the musical that steal the show. Jonalyn Saxer shines as Karen Smith, the dumbest girl in school. Saxer gleefully kicks around stage and makes a splash in her apropos-for-the-season first act number, “Sexy,” about being able to be whoever she wants for Halloween, as long as the costume is also sexy.

Samuel Gerber as Cady’s friend Damien Hubbard brings life and laughter to a role that, in the original movie, was more subdued and on the sidelines. His second act number, “Stop,” is both funny and heartachingly relatable to anyone who has ever felt like they couldn’t help but overwhelm someone they were romantically interested in.

One of the challenges of turning a non-musical movie into an elaborate, two-hour stage production is writing songs that work with the plot. Sometimes, the song falls flat, like “Meet the Plastics,” where Regina, played by Mariah Rose Faith, generally has lines that consist of “My name is Regina George and I am a massive deal.” Some of these songs are really successful, such as “Whose House is This?” which the high schoolers sing as they trash Cady’s house at what is supposed to be a small party. The song is hilarious and the complicated dance routines that the cast bursts into are impressive.

Part of the magic of the 2004 film is the brilliance of the humor. Many of the jokes that made “Mean Girls” so iconic for a generation of young people are the funny, one-liners. The humor of Damien dramatically yelling “Four for you Glenn Coco, you go Glenn Coco” while handing out candy cane grams comes from how unnecessary the joke is. We never hear from Glenn Coco again, and he isn’t even pictured in the movie. The joke contributes nothing to the plot, which is what makes it so funny — and so iconic.

The stage version keeps most of this humor. “You go Glenn Coco!” booms Gerber, thrusting candy canes towards another cast member. The jokes that make the original movie funny are still there, represented in the over-the-top way typical of musical theater. There are even a few new jokes in a similarly unnecessary vein that made the audience roar with laughter.

In the movie, Regina is revealed to be cheating on Aaron Samuels in the projection room above the auditorium. In the musical, Regina’s friend Gretchen Weiners, played by Megan Masako Haley, while in a rage because she thinks Regina likes Cady more than her, tells Cady that Regina has been cheating on Aaron with a boy in their school mascot costume.

When Cady incredulously asks Gretchen if Regina asked the boy to wear the costume, Gretchen howls back “No! They’re both in the costume!” The visual gag of what looks like two people having sex in a mascot costume sent me and the other audience members into hysterics. These sorts of jokes, which make the movie funny even on the 10th watch, keep the musical version fresh.

One distinct difference introduced in the musical is an attempt to update some of the jokes from the movie. Both were written by Fey, and it seems as though she has tried to adapt the material for modern attitudes.

In the movie, when Regina is adding herself to the “burn book” to make it look like Cady wrote mean things about every girl in school, she calls herself a “fugly slut.” On stage, Regina sings of her revenge in “World Burn” while copying pages of the Burn Book to distribute around school. The scene was the most visually interesting in the show, with Haley standing alone on stage, darkly lit in front of a photocopier. The massive screens behind her show her photograph and the words “Regina George is a fugly cow” slowly turning negative, as if read by the copier.

Regina electing to call herself a cow, instead of a slut, lines up with other changes made to modernize the show. The movie includes a subplot about a student having an affair with the school gym teacher which, while small, is wrong, considering statutory rape is a serious crime. That plot is completely removed from the show.

The modernization isn’t entirely perfect, though. Even though Fey has removed some of the more unsavory jokes — such as “if you’re from Africa, then why are you white?” and Karen’s line about her boobs predicting the weather — the musical adds in jokes that seem to completely undo some of the attempts to make the movie more suited to today’s political climate.

In the movie, Cady says the only crush she had as a child was a little boy who ran away from her. In one of the numbes from the first act called “Stupid with Love,” she sings “When I was five, I fell in love / it didn’t last / He ran from me / literally / ran from me / and being Kenyan / he ran pretty fast.” The joke about Kenyan men being fast seems outdated and, frankly, a little racist. While one of the original jokes about race, asking Cady why she isn’t black if she’s from Africa, is racist, it does no good to remove one racist joke, then turn around and make another one.

Despite the occasionally milquetoast music and varying success at modernizing jokes that worked in 2004, but might not today, “Mean Girls” is a hit. The musical manages to capture the most fun parts of the movie, while also bringing new things to the table that are sure to delight audiences through its run.

“Mean Girls” runs through Nov. 3 at The Benedum Center for Performing Arts.