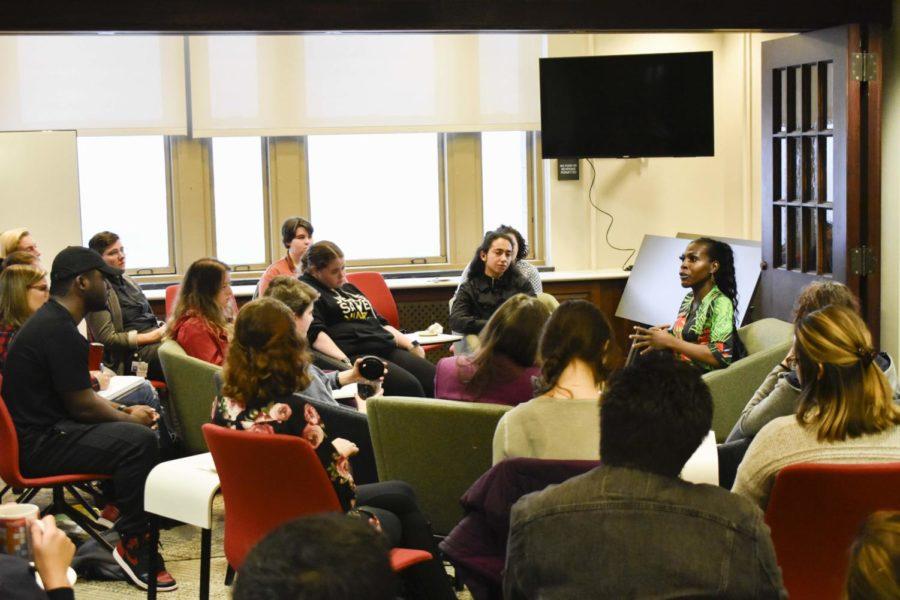 The Honors College hosted Vanessa Carter of SisTers PGH at one of its biweekly Community Cafes on Thursday. SisTers PGH focuses on helping trans women in the county jail by providing bail, resources and jobs for trans people.

“I’ve been in trouble and I’ve been incarcerated before — I know what it feels like. It’s very hard for our community to make a living when you’re kicked out of your parents’ house for being who you are, so you have to turn to sex work to survive another day,” Carter said.

Now, as vice president of SisTers PGH, Carter works to help trans people survive in jail and establish themselves in the workforce. Pitt’s Honors College hosted her Thursday at one of its Community Cafes — events where students can engage with local community leaders — where she spoke about trans rights in Allegheny County Jail.

Rachel Vertucci, a first-year global management major, said Community Cafe provides her with a way to learn more about the Pittsburgh area along with how to be more involved in the community.

“I’m not from Pittsburgh, so the Community Cafes give me insight to what’s going on in Pittsburgh and how I can get involved,” Vertucci said.

SisTers PGH has been focused on helping trans women in the county jail by providing bail, resources and jobs for trans people since its foundation in 2013, but recently it has focused on protections in the jails themselves.

“I’ve heard a few complaints from the county jail that a few girls had been attacked in there. We’ve went to county meetings, we’ve fought, we’ve screamed, we’ve yelled and all they’ve been doing is shutting us out,” Carter said.

SisTers PGH hopes to work with leadership and staff of Allegheny County Jail to designate a pod — a level or section for a particular group of people — so that trans inmates can serve their sentences without fear of being attacked by cellmates. But the idea has faced much resistance from the warden, Orlando Harper, Carter said.

“They’re putting us with murderers and rapists, and it’s just not right,” Carter said. “We’ve had veterans come to the county meetings and say ‘We have our own block in jail, why can’t the trans and the LGBTQA+ community have their own pod?’”

Carter highlighted some of the jail’s worst injustices towards trans inmates, including the processing procedure, which dehumanizes and shames them by reducing them to their genders.

“If you go through the Allegheny County Jail, it’s humiliating. You get your hair pulled, played with, taken off at the door if it’s a wig or a weave, and the word ‘male’ is placed on your door to let people know you’re a male. You’re just stuck,” Carter said.

But one of the most demeaning aspects of the processing procedure, Carter said, is Allegheny County Jail’s policy to “gender check.”

“They do a gender check, meaning that if your legal name does not fit the way you present yourself, then they check your genitalia,” she said.

Carter said that she understands that policy, even though she personally disagrees with it, but the placement of trans women with the male general population is unacceptable in her eyes.

“All we’re asking is to have our own pod to keep us safe and to keep us from being sexually attacked,” Carter said.

In the hope of helping some trans people leave or avoid sex work, Carter has begun her own cleaning company, Carter’s Elite Cleaning Service, that hires trans people and teaches them job skills.

“The best thing we’re doing right now is trying to shelter our trans girls and guys and keep them safe. I currently own a cleaning company, so I’m hiring people of my community to get them off the street and to show them a different way of life,” she said.

Noor El-Dehaibi, a sophomore urban studies and global studies major, said she was impressed with the mission of SisTers PGH.

“It’s hard to be black and trans in Pittsburgh, so I’m glad that people are doing work to make Pittsburgh more livable for every person in it. I got a greater context for urgency from this talk,” she said.

Many students attending the discussion said they were dismayed and outraged upon learning about Allegheny County Jail’s treatment of trans individuals and asked Carter how they could be of assistance to SisTers PGH and the trans community.

“We really need help having a voice and letting the warden of the county jail know that this is not acceptable, that this is very dangerous,” Carter said.

Carter invited all interested parties to attend the next county meeting — date to be determined — to show their support for trans people and SisTers PGH. Her goal is to help and support trans youth and assure them that it’ll be okay.

“I’ve been around a long time and I’ve learned a lot of stuff on my own, and one thing I’ve learned is how to love me and how to deal with this life, being as cruel as it can be,” Carter said. “I just want to pass this lesson on to the younger generation.”