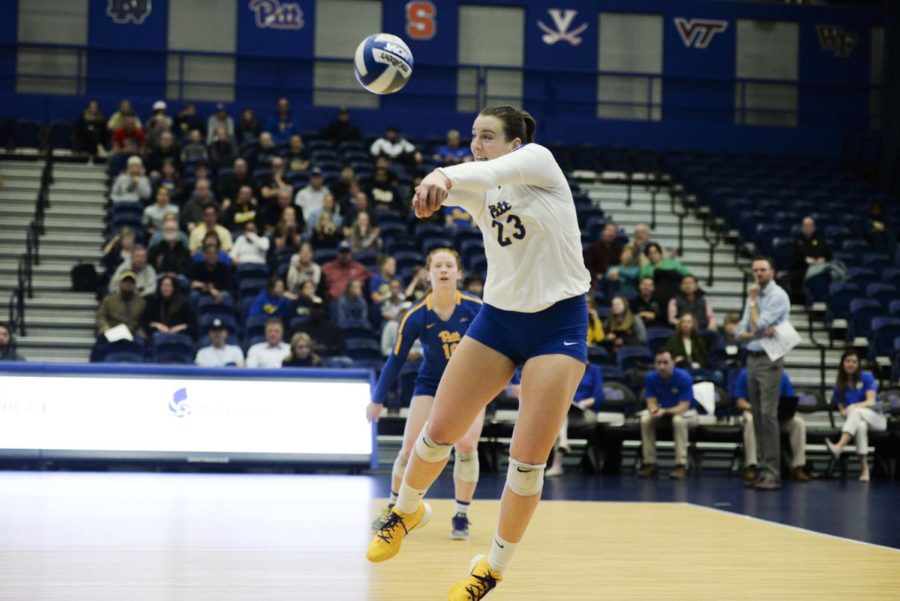 Pitt volleyball swept Wake Forest 3-0 at home on Friday, improving it’s record to 22-1 overall and 11-0 in the ACC.

By Dalton Miller, for The Pitt News

Pitt athletics collected a mixed bag this Halloween weekend — of wins and losses, not candy. A record-setting volleyball win and title-winning bouts for Panther wrestlers were dampened by a rough outing in cross country and a tough loss in men’s soccer.

Coming off of quality finishes in the Texas A&M Arturo Barrios Invitational in College Station, both Pitt men’s and women’s cross country teams traveled to Blacksburg, Virginia, to conclude their seasons in the ACC Cross Country Championships on Friday.

In the women’s 6k, Pitt finished 14th out of the 15 ACC teams, falling one spot from its 13th-place finish last year. Pitt was led by senior Sam Shields, who finished 66th with a time of 22:23.

The men’s team didn’t fare much better. They finished 11th in the 8k, with the top performer being junior Zach Lefever, who finished 38th with a time of 25:17. Although a disappointing result, 2019’s finish is a slight improvement over finishing 13th in last year’s ACC Championship.

Following their epic come-from-behind win over Duke last weekend, Pitt men’s soccer looked to build on their electric second half in South Bend, Indiana, on Friday against Notre Dame, their final match of the regular season.

The Panthers outshot the Fighting Irish 15-5 but were unable to find the back of the net and fell 1-0. The lone goal of the game came from Notre Dame forward Jack Lynn, who was assisted by midfielder Felicien Dumas.

Next up, Pitt will host either Duke or NC State at Ambrose Urbanic Field for the quarterfinal of the ACC Championship. The match is scheduled for this Sunday at 3 p.m.

No. 2 Pitt Volleyball swept Wake Forest 3-0 at home on Friday, improving their record to 22-1 overall and 11-0 in the ACC. With their seventh straight sweep, the Panthers set a program record for consecutive 3-0 wins. They also extended their record for most consecutive wins at home with the 31st straight win at the Fitzgerald Fieldhouse.

Pitt dominated the match from start to finish and swept the Demon Deacons not only in sets, but in stats, too, as the Panthers led the match in kills, blocks, assists and digs.

But Friday’s match was also highlighted by strong individual performances from redshirt senior outside hitter Stephanie WIlliams who led the match with nine kills. First-year setter Lexis Akeo followed her outstanding performance of 37 assists against Louisville with a solid 25 assists against Wake Forest.

Pitt will host Georgia Tech next Friday at 7 p.m. in the Fitzgerald Fieldhouse, looking to extend both of their new program records.

No. 14 Pitt wrestling traveled to East Lansing, Michigan, to open their season by competing in the Michigan State Open on Saturday. They put on a strong showing with three Panthers earning titles and two finishing in second in matches with wrestlers from across the Midwest and Northeast.

Along with those three champions, redshirt freshmen Louis Newell and Luke Kemerer finished as runners-up. Pitt wrapped up the tournament with a total of 12 placers.

The Panthers will now be tasked with defending home turf on Saturday when they host Campbell in the Fitzgerald FIeldhouse for their first dual match of the year.