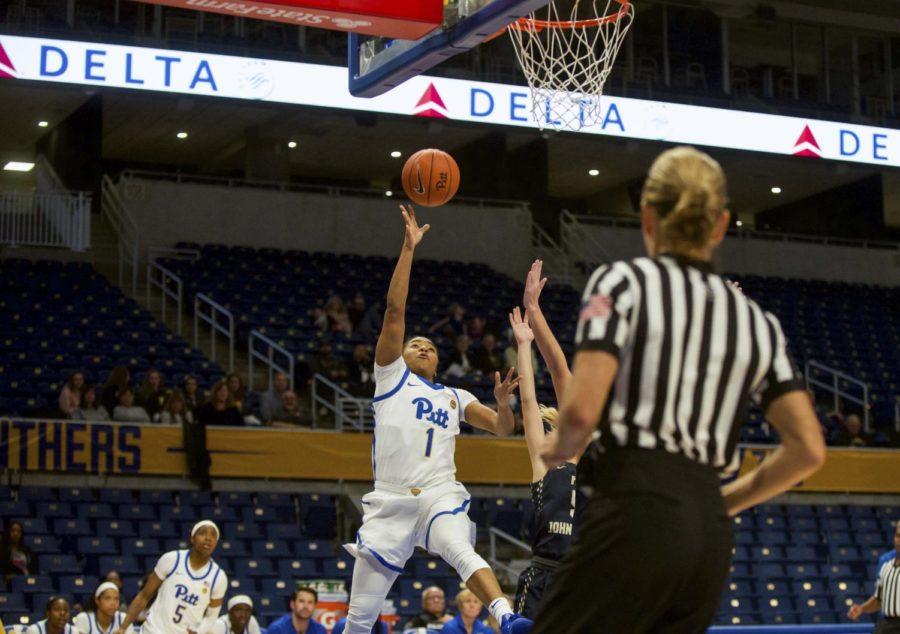 Typically, a preseason exhibition game is an opportunity for more talented teams to tune up for the regular season against a lower-division opponent. But for Pitt women’s basketball, Friday night’s exhibition against Pitt-Johnstown was another story. The Panthers struggled mightily, escaping with a narrow 76-62 win over the Division II Mountain Cats.

Five Panthers took the floor of the Petersen Events Center for the first time, a clear sign that head coach Lance White is ready to make this program his own. But along with all of the new talent comes inexperience, something White saw firsthand Friday night.

“I think with a young team it’s gonna be constantly keeping their emotions in check and we’ve gotta learn,” White said. “We’re going to have to be a team that grows every day and every game.”

Pitt started the first quarter quickly with a 5-0 lead after first-year guard Dayshanette Harris made a free throw and a layup on the fast break, followed by a layup from junior center Cara Judkins. But through the remainder of the first quarter, Pitt-Johnstown steadied their play to maintain the five-point deficit at the end of the first period.

In her first quarter back from a bout with blood clots in her lungs, redshirt senior guard Aysia Bugg struggled, scoring 0 points on 0-3 shooting. And Pitt followed her lead, shooting only 38.3% from the field, 0-3 from 3-point range and 68.8% from the foul line. But an opportunistic Pitt defense collected eight steals in the quarter and helped Pitt maintain its slim margin.

The Mountain Cats were led by senior forward Alli McGrath, who scored 10 points on 4-8 shooting from the field, including 2-5 from 3-point range. But she was the lone Mountain Cat to shoot efficiently. Collectively, they shot a lowly 38.8% from the field.

But in the second quarter, Pitt began to break away from the Mountain Cats with a 12-2 quarter-opening run in less than three and a half minutes. Bugg finally got on the scoreboard with a 3-pointer and layup and Brown converted an old-fashioned 3-point play to fuel the dominant stretch.

Even though the rest of the second quarter was more closely contested, the Panthers closed the half leading 44-26. And despite continued poor shooting overall, they shot 4-11 from 3-point range to expand their lead by halftime.

Bugg was finally able to find her stroke in an electric second quarter. She scored 14 points by way of four 3-pointers on six attempts in addition to one 2-point field goal. Bugg and Brown combined to score 21 of Pitt’s 23 second-quarter points.

On the other hand, Pitt-Johnstown continued to struggle offensively in the second quarter. Only two players scored for the Mountain Cats, who could muster only 10 points in the quarter.

The third quarter saw the Mountain Cats cut into the Panthers lead, but never come closer than an 11-point deficit. Smith single-handedly made a 9-2 run in the third quarter, by converting an and-one off a layup and then making six more free throws.

That run was the highlight of Smith’s strong third quarter. She was the Mountain Cats’ most efficient player in the quarter, finding her way to the line seven times and making every foul shot. Junior forward Maddie Shanahan chipped in six points as well.

Bugg continued to show more comfort as the game progressed. She tallied another double-digit scoring total in the third, but was the only offensive threat the Panthers could turn to. Harris especially struggled in the third quarter, committing three turnovers.

Pitt-Johnstown refused to fold, cutting into Pitt’s late lead with a 10-2 run that shrank the deficit to 11. But the Panthers were able to close out the Mountain Cats with three layups, one from Bugg and two from Judkins, and secure a 76-62 win.

The Panthers struggled offensively overall, making only 27 of their 73 field goals and 25% from 3-point range. Despite their struggles to put the ball in the basket, Pitt commanded a strong edge in rebounding and steals.

Bugg dropped a team-high 26 points in her first game action since last November, and her 6-15 mark from the 3-point range accounted for all of Pitt’s makes from distance. Brown, in her first game as a Panther, tallied 15 points and nine rebounds which tied for the team lead.
Harris also contributed a strong effort in her Pitt debut with nine points, seven assists and four steals. White is confident that, despite some trouble with turnovers, his young point guard will have a bright future.

“She’s a dynamic player and once her fundamentals get a little bit better and she’s able to dribble a little bit more with her left hand … I think she’s going to be a really fun player,” White said.

Pitt will open their season in earnest on Wednesday, when they travel to Orlando, Florida, for an 11 a.m. tip-off with UCF.