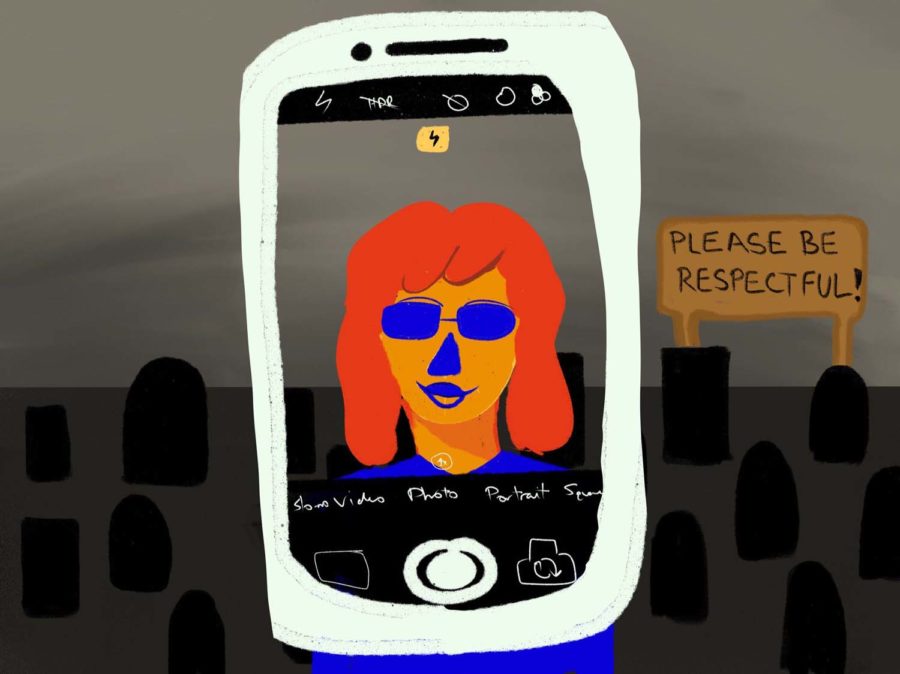 Some of the most horrific sites of human atrocities have recently experienced a resurgence in tourism. Unfortunately, this new brand of tourism is more centered on snapping selfies and jumping in the air for perfect Instagram photos than simply learning about the history of these places.

Recently, a post circulated around Facebook from a page entitled “I Love Poland” that shows a series of photos of children and young adults posing at the Auschwitz museum in Poland. Some show tourists walking across the train tracks like they’re on a balance beam or posing for a selfie with their friends on the tracks. Another shows a young girl jumping for joy under the entrance sign of the Auschwitz camp, which says “Arbeit macht frei” — a German phrase meaning “work sets you free.”

These train tracks were used to deport thousands of Jews to concentration and extermination camps, where they were starved and systematically murdered by the Nazis. Having a fun photoshoot at a place like this is not only extremely insensitive and disrespectful, but it also displays a blatant ignorance of a time in history that should not be taken lightly. This behavior, mainly from millennials and Gen Zers, is reflective of a disconnect with the past and simultaneously reveals a dangerous aspect of social media.

There is a certain etiquette that tourists should take into account when they are strolling through places like Auschwitz or the Holocaust memorial in Berlin. An Israeli artist — Shahak Shapira — decided he was fed up with the disrespectful photos people posted from the Holocaust memorial in Berlin. As a response, he launched a project in 2017 called the “Yolocaust” — a play on words which combines the Holocaust with the previously popular hashtag “YOLO,” short for “You Only Live Once” — in the hopes of shaming people who took and posted these disrespectful photos.

“Over the last years, I noticed an interesting phenomenon at the Holocaust memorial in Berlin: people were using it as a scenery for selfies,” Shapira said. “So I took those selfies and combined them with footage from Nazi extermination camps.”

Essentially, Shapira took a series of photos that people posted on Facebook, Instagram, Tinder and Grindr of themselves smiling at the memorial site — doing yoga poses on the memorial and taking selfie stick photos — and replaced the background with actual photographs from the concentration camps during the Holocaust.

“About 10,000 people visit the Memorial to the Murdered Jews of Europe every day,” Shapira explained. “Many of them take goofy pictures, jump, skate or bike on the 2,711 concrete slabs of the 19,000 m² large structure. The exact meaning and role of the Holocaust Memorial are controversial. To many, the grey stelae symbolize gravestones for the 6 Million Jews that were murdered and buried in mass graves, or the grey ash to which they were burned to in the death camps.”
Although Shapira’s “Yolocaust” project depicts deeply disturbing images from the Holocaust, he is showing the reality of the situation for Jewish people back then. He is reminding people that we need to remember the past and reflect on it, rather than using it for likes and followers.

The issue of Holocaust education also plays an important role in this controversy. According to the Washington Post, a study released on Holocaust Remembrance Day revealed that 66% of millennials could not correctly identify what Auschwitz was, and 22% of millennials said they hadn’t even heard of the Holocaust. In the United States, there are currently only 12 states that require Holocaust education as a part of their secondary school curricula, according to the United States Holocaust Memorial Museum.

Clearly, a lack of education is part of the problem. The tourists who are taking these inappropriate photos don’t only misunderstand the harsh reality that was the Holocaust, but they also do not understand their privilege of even being able to stand in these places. These people are able to go home after visiting the concentration camps or memorials. The Jewish people who were killed at these places in the late 1930s and early 1940s did not have this choice.

But this trend of posting disrespectful photos does not simply end here. Recently, social media influencers have been flocking to Chernobyl in Pripyat, Ukraine, to take photoshoots at the site of the major nuclear explosion that occurred in 1986. This was a catastrophic event that caused toxic radiation to spread, leading to both cancer and death. Since the popular HBO show “Chernobyl” came out in May, this 1986 explosion has become a trendy topic, and wealthy influencers are using the site as a destination for Instagram modeling.

There are several photos of different social media influencers, such as Luis El Crack and Kate Snap, posing in the paper hazmat suits that Chernobyl tour companies give to tourists who go to Chernobyl, and many of these photos are very disturbing. A few in particular show young models in rolled-down hazmat suits, revealing their bikinis or matching bra and underwear sets. Even the creator of HBO’s “Chernobyl,” Craig Mazin, has advised tourists to be more respectful at the radioactive site.

“If you visit, please remember that a terrible tragedy occurred there,” he tweeted. “[Comfort] yourselves with respect for all who suffered and sacrificed.”

This situation is also reminiscent of when Logan Paul, a popular star on YouTube, posted a video showing the body of a dead person in Aokigahara — a Japanese forest that has become known as a site for numerous suicides. In the video, Paul was laughing and making jokes while vlogging in the forest with his friends. The video cuts to a shot of a body hanging from a rope in a tree and Paul says, “Bro did we just find a dead person in the suicide forest?”

Paul has since taken down the video and apologized for it, claiming that he was trying to raise suicide awareness. But despite the fact that the video was demonetized, Paul was accused of exploiting a person’s suicide for the sake of views and attention. The freedom to post anything on social media can become a very dangerous thing.

It’s one thing to visit a place where something violent or upsetting occurred in the past, but it’s another to go there and pose for photos for clout and recognition. These tourists clearly don’t understand the history behind these places, nor do they recognize their privilege in even having the opportunity to visit. With this new wave of influencer tourism, people need to be more wary of their surroundings and what they are documenting for the world to see. It’s about time people started thinking before clicking “post.”

Write to Remy at [email protected]