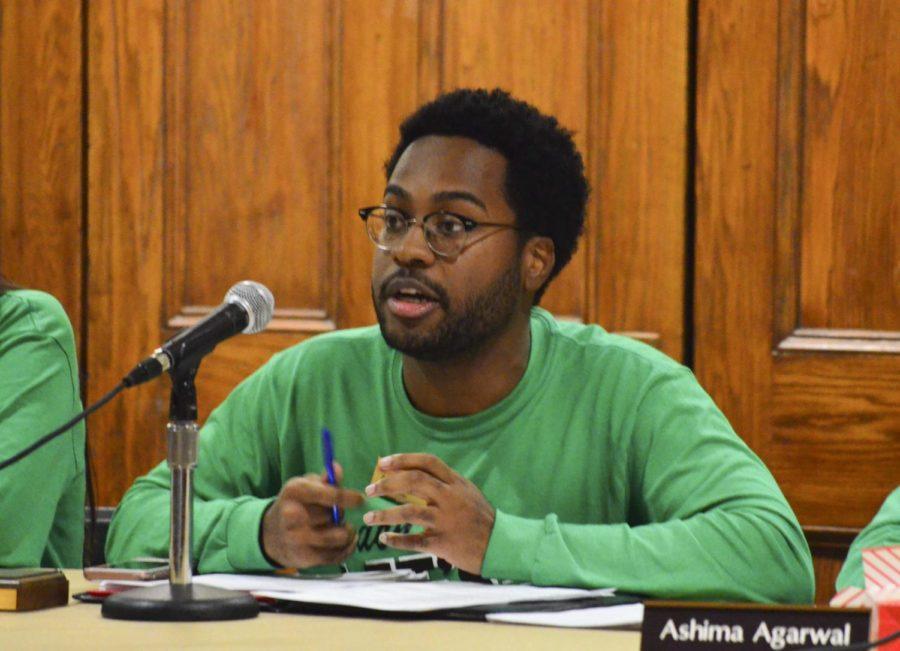 SGB discussed Bigelow Boulevard being closed and the draft of the new SORC rules.

“Over the next three weeks I hope to get more signatures so we can deliver that letter to the desk of Sen. Toomey and Sen. Casey,” Glaser said.

SGB President Zechariah Brown announced the board will soon accept grant proposals from student groups for projects to prevent sexual misconduct on campus, about a week after the University made up to $250,000 in funding available to faculty and staff for similar projects.

Brown said he met last week with Vice Provost and Dean of Students Kenyon Bonner and representatives of both the Graduate and Professional Student Government and the College of General Studies Student Government to discuss the grant proposal process.

“The proposal is currently being edited and will be completed in terms of its editing by Friday,” Brown said. “I will have much more information for you guys as to the final proposal with us by next Tuesday.”

The grants are part of a community-driven response pushed by Chancellor Patrick Gallagher in response to the Oct. 15 release of a survey analyzing sexual assault and misconduct on 33 university campuses.

Brown also provided an update on the ongoing effort to preserve the names of independent student organizations in the wake of updated Student Organization Resource Center naming guidelines.

SORC announced in late August that beginning fall 2020, its registration guidelines would prohibit the names of independent student organizations from including University trademarks or wordmarks like “Pitt” and “Panther,” — instead encouraging clubs to use phrases such as “at Pitt” or “at the University of Pittsburgh.”

He said the board decided on three possible solutions to the problem, which could affect as many as 393 of the 639 student organizations on campus.

The board’s preferred solution is to utilize SORC to approve names and marketing materials for clubs that want to “co-brand” with the University — allowing the use of University trademarks or wordmarks as long as sponsorship is not implied or stated. This model is currently in use at Boston College, the University of Notre Dame and the University of Miami, according to the board.

Brown said the board is accepting feedback from students and faculty and will discuss the issue again at its next public meeting on Tuesday.

Other SGB board members provided updates on their respective initiatives at Tuesday’s meeting.

Vice President and Chief of Finance Ashima Agarwal said she is making progress on her initiative to strengthen relations between current students and Pitt alumni. She reached out to Cheryl Finlay, director of the Career Center, to see how the Center’s current career consultant program could be augmented to include alumni.

“We’re hoping to learn more about the information of the career consultant program the office has and how student and alumni connections can be overlayed and taken farther than they are already,” Agarwal said.

SGB member Eric Macadangdang said he met last week with students about improving the University Counseling Center and the Office of Disability Resources and Services. The Counseling Center has faced backlash in the past for long wait times due to high demand by students, but recently increased staffing and cut its waiting list to zero.

He added that students should reach out to him if they wish to share their experiences.

Macadangdang and Unger said they are in the process of selecting members for their new Campus Planning and Design Task Force, aimed at providing a way for students to voice feedback about Pitt’s Campus Master Plan. The group hopes to announce a finalized list of members before Thanksgiving in two weeks and meet with University administrators before the end of fall term.

Club Cross Country Team requested $2,614.20 to attend a national championship competition. The board approved in full.