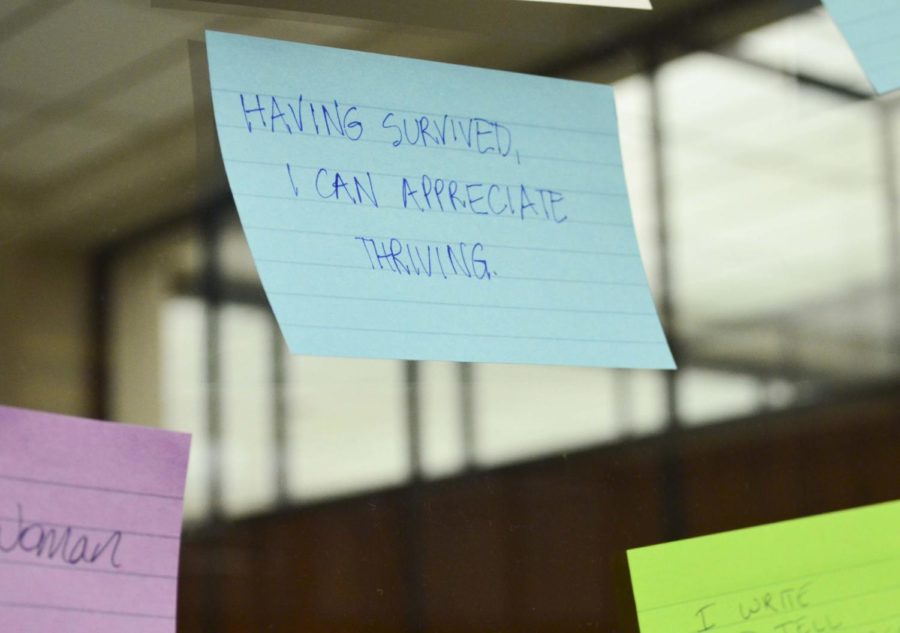 The Open Door Project hosted Six Word Stories: an Interactive Exhibit Monday, where visitors were asked to write about themselves in only six words.

People of all levels of literary prowess are likely familiar with Ernest Hemingway’s legendary six-word short story — “For sale: baby shoes. Never worn.” But how many people can say they’ve written such a story themselves?

About 15 people gathered Monday afternoon in the Amy E. Knapp room on the ground floor of Hillman Library for Six Word Stories: an Interactive Exhibit. The event was run by The Open Door Project — a diversity and inclusion initiative launched by the Dietrich School of Arts and Sciences — along with the University Library System as a part of Pitt’s Year of Creativity.

Monday’s program consisted of a discussion of what it means to exist in today’s world and gave participants an outlet to articulate these sentiments in the six-word story format. This event was the first segment of the exhibit, with a follow-up ceremony scheduled for Nov. 14.

anupama jain, an instructor in the gender, sexuality and women’s studies department, and Dawn Brubaker, an adjunct social work professor facilitated the discussion.

According to jain, Monday’s discussion was a poignant and effective way to bring together people from the community to talk to each other about collective humanity in the modern day, in addition to recognizing relevant issues.

“We need to get people talking to each other and talking honestly,” jain said. “[It can be difficult] getting to those places that maybe aren’t as comfortable or as familiar and talking about our identities and really being able to articulate ‘Who am I when I come into a space.’”

Prior to the discussion, Brubaker hung signs on the wall throughout the room, each one marked with just one word. Each sheet of paper represented a certain identity — class, age, ability, nation of citizenship/immigration status, race and sexuality — that go beyond just someone’s name.

Jain said these identities were brought about in hopes of prompting what would inspire participants’ six word stories.

“The answer to this question of ‘Who am I?’ is absolutely unique,” jain said. “It’s about our lived experiences … So we have chosen identities, the communities we want to be a part of, as well as those that are [ascribed] to us. Part of what we’re thinking about here is — in six words — what might you say?”

Lydia Collins, a Greenfield resident, said while she is uncomfortable talking about her racial identity, the discomfort is not what bothers her most.

“As a woman of color, often the only one in the space, we are often asked to do such heavy lifting to talk about this,” Collins said. “Sometimes it’s not so much discomfort as it is I’m uncomfortable to continue having these same conversations over and over again.”

Following the discussion of personal comfort, jain shifted the questions toward what people are most or least knowledgeable about and asked participants to contrast their comforts from their knowledge.

Brubaker took this opportunity to widen the discussion about the impact that knowledge has on identities with the help of her own experience. Her experience comes mostly from her Ph.D. in social work, and her work with immigrants in writing her dissertation.

When jain asked the group what identity they knew most about, Brubaker moved to the station that indicated the nation of origin/immigration status.

However, Brubaker acknowledged that although she may be very knowledgeable about immigration status as an identity, her view is limited because she was born in the United States.

“I felt uncomfortable going to [nation of origin/immigration status] as what I most knew,” Brubaker said. “While my doctoral dissertation is on it, I am from here. My privilege is here. I did not experience what the people I worked with for 20 years did. I can only say from a limited perspective what that process is and the violent oppression people are experiencing.”

Following this discussion on acknowledging privilege, jain continued to prompt the group with questions such as what they are most impacted by, most influenced by along with other similar ways of introspection.

Once the identity activity finished, participants were given about 15 minutes to write their own six-word short stories. According to jain, the goal was to have the participants think about what they learned about themselves and others and incorporate it into their narrative.

“What I want you to think about is who is it that you want to share with the world today,” jain said. “This conversation about intersectionality, of course, is never going to capture the entirety, but it’s an opportunity.”

Participants were encouraged to draft multiple stories, and jain encouraged them to think about it as “a poem about yourself to the world.” Once people selected their story and wrote it on a neon sticky note, the group moved to the first floor, where each of the six-word stories would be posted. The event organizers and facilitators then encouraged participants to share their stories and read them aloud.

“More than what you see,” Collins read from her sticky note, “thriver.”

Hillman visitors can look at the stories posted on the first floor — on the right side when you walk in — and even draft one of their own. The sticky notes will stay in place until the reception for the exhibit on Nov. 14, which will take place in the Thornburgh Room on the first floor. At the conclusion of the activity, jain said she was grateful that this event gave a creative space for people to share stories with each other.

“This is a real example of getting to spend an hour and a half just encountering each other and trying to get to ‘who am I,’ genuinely and authentically,” jain said.