Agree to disagree: Gauging the take meter after Pitt-FSU 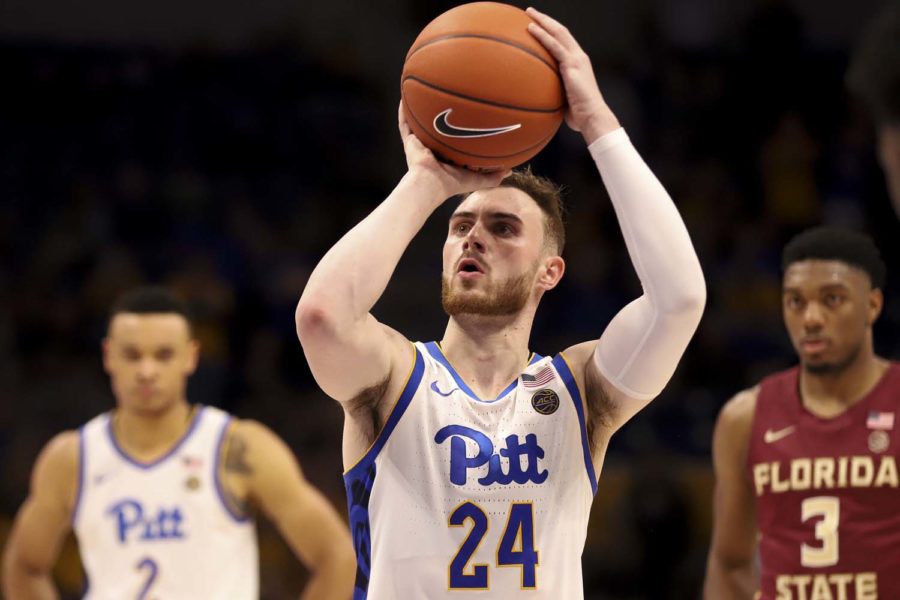 Junior guard Ryan Murphy (24) scored 13 points on Florida State during the Panthers' 63-61 over the Seminoles.

Pitt men’s basketball started its season with a sloppy — but impressive — win over Florida State on Wednesday night, presenting several talking points about the team moving forward in the process. Two TPN staff writers break down which of these points are valid and which are simply bogus.

Au’Diese Toney and Gerald Drumgoole should be removed from the starting lineup.

Sean Tierney: Agree. Last night was probably an anomaly, but a combined 0-11 from the field and 0-6 from three is not just bad, it’s abysmal. College sports are often about playing the hot hand and seeing who can rise to the occasion, and last night neither of them could do that. Fortunately for Pitt, its bench provided some promising replacement options.

Junior transfer Ryan Murphy was most impressive, shooting 3-6 from behind the arc and 4-4 from the free-throw line. He displayed an efficient shooting ability that could be extremely valuable to a Pitt offense which looked sloppy and unable to score the ball. He also added three assists, showing he can create opportunities for his teammates.

Another strong performer off the bench was junior forward Terrell Brown. He scored an efficient 13 points from the paint and capitalized when the defense resorted to fouling, shooting 5-6 from the free-throw line.

While Drumgoole and Toney wildly underperformed, Murphy and Brown showed they might be effective starting players. Adding Murphy’s shooting range and Brown’s height to the starting could help space the floor on the offensive end and add height on the defensive end.

Kyle Saxon: Agree. The majority of Pitt’s depth is in the frontcourt this season, and after their performances last night, Drumgoole and Toney should be seeing less minutes until they can prove they belong on the court. Head coach Jeff Capel is doing an excellent job of restoring a winning culture, and a large part of that mindset is that nothing should be guaranteed. Not only did the starting forwards fail to earn their minutes, but they were thoroughly outperformed by their replacements.

The Panthers fielded a lineup of Xavier Johnson, Trey McGowens, Ryan Murphy, Justin Champagnie and Terrell Brown for the final 11:38 of last night’s game. Simply put, they were the five best players wearing a white jersey for the entire game.

Though there may be appeal to keeping Murphy in his bench role to provide instant offense, like Jared Wilson-Frame last season, Champagnie is a clear-cut starter at either forward position. His unmatched combination of athleticism, rebounding and defensive versatility makes him better suited as a starter than either of the forwards who got the call last night.

Brown also showed tremendous improvement, playing perhaps his best game ever as a Panther. He could be rewarded with the starting nod at some point in the near future.

There is no telling what specific lineup Capel will use going forward. It could depend on matchups, game flow or he might elect to simply field his five best players and play positionless basketball as he did down the stretch last night. Regardless, Toney and Drumgoole have likely moved down in the rotation and will have to earn back their minutes.

Sean Tierney: Agree. Murphy performed as well as anyone could have hoped on Wednesday night. He proved that he can shoot the ball efficiently from three and reliably convert free-throw opportunities. While Pitt was often forcing and missing shots, Murphy’s ability to take and make good shots helped to spark the offense and prevent FSU from taking over.

Throughout the season, Johnson and McGowens will be much more ball-dominant and create scoring opportunities for themselves and others, but Murphy’s role will be that of a pure shooter. It’ll be his responsibility to spread the defense, move off the ball and get open. His catch-and-shoot style will allow him to get plenty of shot opportunities, which will translate to a steady diet of points if he continues to shoot like he did last night.

Kyle Saxon: Disagree. As crucial as Murphy was to the winning effort, another guard showcased a heightened ability to score the basketball. He did not play his best game by any means, but McGowens at least displayed a largely improved outside shot. While Murphy may have seen more scoring success against the Seminoles, McGowens will prove to be a consistent second option in games to come.

McGowens made just two shots on six attempts, but both of those baskets were from beyond the arc. Florida State’s tremendous interior defense posed a huge matchup problem for the Panthers’ offense, as Johnson and McGowens excel at getting into the lane and finishing at the cup. The Seminoles blocked six shots and altered essentially every attempt around the rim.

Other than the occasional trip to the foul line, McGowens was forced to score his points from outside. Consistency from deep was something he continuously struggled with last season, but last night provided hope that McGowens can be a steady shooter for the Panthers this year. Murphy had an excellent game, but nobody should forget the type of talent McGowens possesses. He will be one of Pitt’s top two scorers this season.

Pitt will return to the NCAA Tournament for the first time since 2016.

Sean Tierney: Disagree. There’s no doubt that Pitt will be an improved team this year. Last season was just the start of the program’s rebuild with Capel and his first recruiting class. In year two, expectations are high for Johnson and McGowens, who both had very impressive rookie seasons. To build around them, Pitt added shooting with Murphy and size with Drumgoole, Eric Hamilton and Champagnie. The roster is looking as strong as ever in recent years, and many have faith in Capel’s ability to get the best out of it.

Despite all this, I don’t think the Panthers will make the NCAA tournament. Being an ACC team, they have a very challenging schedule and still lack what it takes to win enough of those games. Sure, Pitt won last night against a quality opponent, but the Panthers didn’t resemble a tournament team. Their offense had no rhythm, they couldn’t hit shots and they turned the ball over. The only thing keeping the game close was the fact that FSU performed just as poorly. Pitt simply cannot play like that and expect to have success in the ACC.

Kyle Saxon: Agree. The first game of the season should not be what dictates a prediction of this magnitude. But looking at Pitt’s roster and what it was able to do with so many new faces in its first game, there’s no reason to doubt my preseason prediction that the Panthers will make the big dance.

Perhaps the most impressive component of the Panthers’ victory was their togetherness. They returned just four healthy returners from last season and were tasked with a strong ACC opponent in their first-ever game together. FSU is coming off a Sweet-Sixteen appearance and was picked to finish fifth in the ACC Preseason Media Poll. This was a tournament-level opponent that the Panthers defeated in their debut.

Although they struggled to make shots, Pitt played excellent, intense defense and rebounded the ball extremely well against a much larger team. On top of all of that, the Panthers made 22 free throws on 31 attempts and converted on essentially all of their opportunities for easy points down the stretch. Crashing the glass and leaving points at the charity stripe were two huge concerns for Pitt entering 2019-20. Last night, it answered the call and found a way to win.

There’s still plenty of growth to be had if the Panthers intend on making the NCAA Tournament, but I believe that growth can occur throughout the course of this season. Capel has accumulated ACC-level talent, and the makeup of Pitt’s roster seems poised for success. Their performance against the Seminoles should only give Panther fans hope that Pitt could hear its name on Selection Sunday.