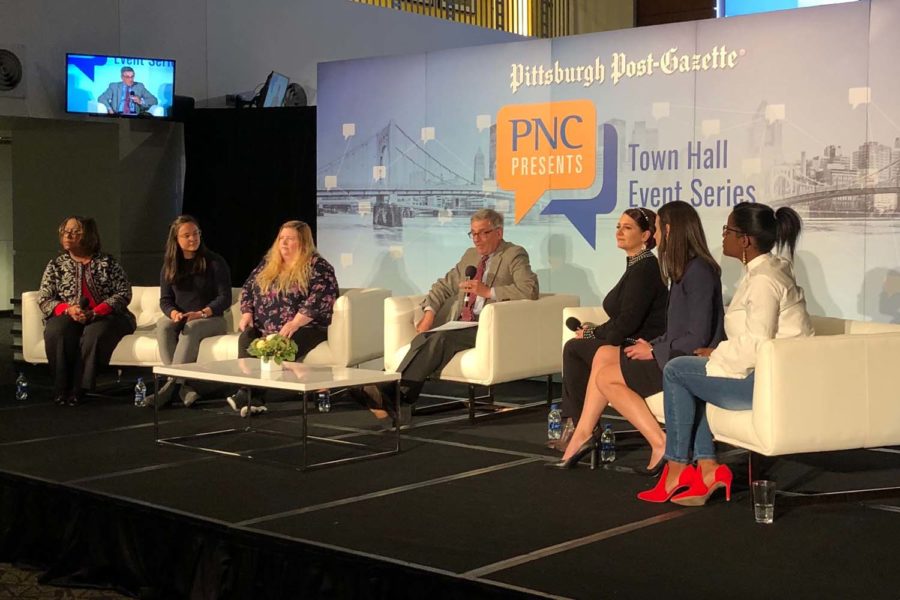 David Shribman, moderator at “PNC Presents Mental Health: Helping Our Kids Find the Light,” leads the panel’s discussion on rising rates of depression in youth populations across the nation.

Suicide rates among young people ages 10 to 24 have increased by 56% since 2007, according to a recent report form the CDC.

But Charma Dudley, the board president of the National Alliance for Mental Illness, said young people’s mental health issues have always been around — they have just gone unnoticed.

“People thought that children weren’t cognitively mature enough to be depressed,” Dudley said. “And if they were an adolescent, they were just acting out.”

PNC and the Pittsburgh Post-Gazette presented a panel at Heinz Field Thursday night called Mental Health: Helping Our Kids Find the Light. The night’s conversation focused on how young people are affected by mental illness — and explored the different ways such young people can be supported. The event was moderated by David Shribman, the executive editor emeritus for the Pittsburgh Post-Gazette.

Panelist Julia Lam, a Pitt senior and the president of Pitt Active Minds, said the misunderstandings around mental illness come from stigma.

“A lot of adults are hesitant to speak to students about mental health or even suicide prevention or doing some kind of conversation about how to help a friend in crisis,” Lam said. “I think, especially coming from a peer-based organization, that peer support is so important.”

Pitt Active Minds, the Pitt branch of the national nonprofit, works to educate students on helping peers in crisis, hosting education programs like “What is Therapy?” during Mental Health Awareness Month at Pitt in October.

“Youth will most often tell a friend first if they’re having thoughts of suicide,” Lam said. “So why aren’t we training students to be able to support their peers adequately?”

Kimberly Fairley, author of “Perfectly Imperfect,” “An Encounter with Grace” and “144 Days,” said that hesitation in talking about mental illness is passed down from generations that have avoided the issue.

Lam said providing spaces for young people to speak about what they are feeling is crucial. While seeking medical professionals helps immensely, she said, it is also important for parents and peers to provide that support locally.

“Limiting information about suicide prevention to specific certifications limits the information from spreading to the general population,” Lam said. “So just talking to your children or [a] student about talking to someone [who is] not necessarily in crisis…[and] how to listen to understand instead of listen to fix.”

Sansea Jacobson, associate professor of psychiatry at Pitt, said this kind of communication can help to build more stable communities.

“Teaching our youth how to reach out, how to embrace otherness and not live in the bubble that we know, but that kids that don’t look like us or behave like us or not from our same backgrounds are worth knowing and are important to know,” Jacobson said.

Social media and how it is used by young people is a constant worry for parents, Lam said. But the conversation should not be about preventing the use of social media, it should be about using it responsibly.

“While use of social media and the internet can be harmful, it can also be very helpful,” Lam said. “Building networks of youth that are supportive of each other and sharing stories of resilience can build community.”

Jacobson spoke about the option of using apps to control a child’s screen time in order to keep it low, a practice which Lam disagreed with.

“Using an app to control screen time or content circumvents the issue of openly communicating with your child which would create a healthier relationship that would make them more open to talking to you about problems they’re having,” Lam said.

Jacobson agreed and said that there is no such easy solution. It is a process of education that the wider community needs to be involved in and committed to.

“Help [young people] with interpersonal skills, help them with mindfulness, then these kinds of relationships are more human,” Jacobson said. “Then they can access care from people that maybe are not experts, but people that can help them get to the care they need.”

Patricia Poloka, another panelist and the coordinator of Allegheny County’s Crisis Intervention Team, works with Pittsburgh police officers on crisis and de-escalation training. Poloka said it is her goal to create acceptance and understanding of mental illness in the wider community.

“A lot of times the first encounter that people with mental illness encounter in a negative manner is law enforcement,” Poloka said. “It’s important for officers to learn how to deal with this population.”

This dissonance between mentally ill people and law enforcement, Poloka said, can be mitigated with better training programs such as lessons on how to diffuse mental health crises.

According to Dudley, negative interactions between the police and mental ill people are often much more prevalent with marginalized groups.

“Oftentimes in these communities, children are exposed to violence and these children are not oftentimes diagnosed appropriately,” Dudley said.

Fairley echoed the sentiment, saying that a power imbalance is created by a lack of support for mental health advocacy in marginalized communities.

“I think it’s a major issue that there aren’t a lot of people that we can relate to in the first place,” Fairley said. “We already see all of the racism and these issues, especially within the City of Pittsburgh. We have a shortage of people that can look like us and relate to us, and it’s hard to figure out who is for us, who can assist us, so it needs to be a major priority right now.”

The main way that communities can make the mental health of young people a priority is by opening up the conversation and by giving people the means to get help.

“What we have to do is stomp out stigma,” Dudley said.