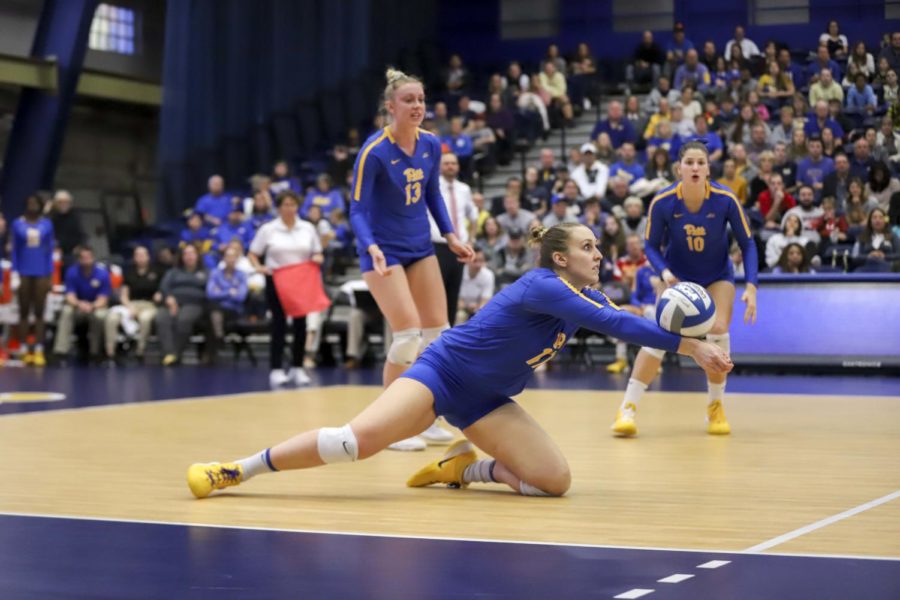 By Dalton Miller, for the Pitt News

Pitt athletics put together a solid weekend, with the wrestling and volleyball teams picking up big wins, while both the men’s and women’s swimming and diving teams sank in their meets. Volleyball continued its conference match winning streak and wrestling opened its dual meet season with a convincing win.

Coming off of wins for both teams in their last meet at Michigan State, the Panthers hosted a meet this weekend against Notre Dame, with events taking place on both Friday and Saturday. Notre Dame swept the meet with Pitt men’s team falling to the No. 18 Fighting Irish, 222-130, while the women lost to No. 23 Notre Dame 223-125.

Although both the men’s and women’s team took tough losses, there were a few bright spots from this meet.

The men had three individual event winners, first-year Cooper van der Laan, junior Blaise Vera and senior Eben Vorster. Vera took the top time in both the 50- and 100-yard freestyle with times of 19.75 and 43.30 respectively. While Vera dominated in the freestyle races, van der Laan reigned in the breaststroke with wins in both the 100- and 200-yard races. Vorster also pulled out a win in the 200 fly. The Pitt men also managed a top finish in the 200 free relay.

The women also came out of the meet with three event winners. Senior Valerie Daigneault grabbed the top spot in the 200-yard freestyle while fellow senior Samy Helmbacher came out with a win in the 200-yard individual medley. While there were a few event winners in swimming there was only one win in diving, which went to sophomore Amy Read who took the top spot in platform diving.

The Panthers will have a week off before their next meet at the Purdue Invitational in West Lafayette, Indiana, Nov. 21 through Nov. 23.

Following an impressive performance with a number of wrestlers winning titles in last weekend’s Michigan State Open, No.15 Pitt wrestling hosted Campbell University on Saturday at the Fitzgerald Field House for its first dual meet of the year. Pitt handled the Camels easily in a dominant 28-6 win.

The Panthers started out slow, falling behind 3-0 but then rallying with six straight wins, fueling the blowout.

Pitt will continue its season next Friday, when it hosts No. 3 Ohio State.

Following its sweep of Duke last Sunday, Pitt hosted Georgia Tech on Friday. In its first match of the weekend Pitt volleyball came out with a tough win at home, going five sets against the Yellow Jackets.

Despite being out-killed and having fewer assists and digs than Georgia Tech, the Panthers managed to pick up a gritty win. While this win extended their ACC record to 14-0 — the best start to an ACC season ever for the Panthers — their streak of eight straight sweeps in the ACC was snapped.

On Sunday in their second match of the weekend, the Panthers snagged a four set win at home over Clemson in their last home match of the regular season. With this victory, they extended their streak of wins at the Fitzgerald Field House to 34 in a row, with their last loss coming in 2017.

The match was littered with a number of impressive individual performances from Pitt, led by senior middle Layne Van Buskirk with a match-high nine blocks. Junior outside hitter Kayla Lund put up a solid 15 digs and a match-leading 15 kills.

The Panthers will continue their season next week when they travel to Durham, North Carolina, to take on Duke.

The Panthers followed their season-opening win over Florida State with a flop, falling to Nicholls State 75-70 on Saturday afternoon.

Pitt men’s soccer continued their historic season with a quarterfinal win over NC State in the ACC Tournament, 2-1 in overtime on Sunday afternoon.