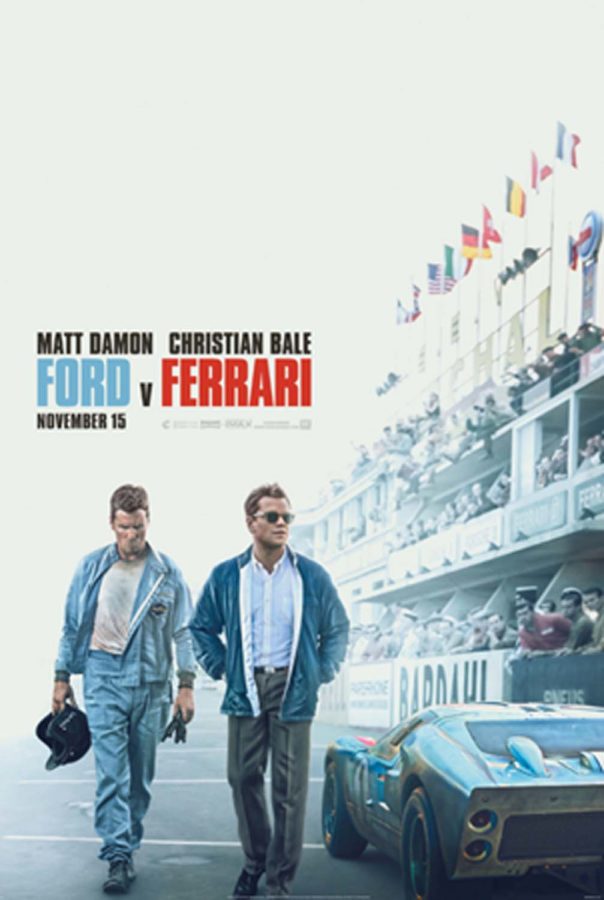 In the same way that “Joker” is a comic book movie made with all the trappings of the types of films we’ve come to expect around awards season, “Ford v Ferrari” is a sports movie that is shot, acted and scored like an Oscar-bait film.

Directed by James Mangold and starring Matt Damon and Christian Bale, “Ford v Ferrari” tells the true story of Ken Miles (Bale), a British mechanic-turned-race-car-driver, and former American race car driver Caroll Shelby (Damon) who was forced to retire due to medical issues. The two work together to create a car for the Ford Motor Company that can beat Enzo Ferrari in the 1966 24 Hours of Le Mans — a 24-hour car race.

“Ford v Ferrari” is very much a classic sports movie, like “Rocky” or “Youngblood.” The plot goes like this — the protagonist has a sport that they enjoy, and with the help of a coach or some teammates, they overcome the obstacles and win, or they lose but they seize a moral victory. Miles fills the role of the underdog who wants to take part in the race, while Shelby fills the role of the coach whose glory days are behind him, but supports Miles’ efforts and tries to teach him to become a better person along the way.

Even if you have no prior experience with professional race car driving, the film gives its audience enough information on how the races work and delivers the information without resorting to clunky exposition. This allows the audience to understand the implications of everything that happens at the final race in Le Mans without requiring the film to pause the action to explain.

The cast is very well-acted. For the most part there’s a lot of chemistry between actors, especially in the relationship between Miles and his wife, as portrayed by Bale and Caitriona Balfe. However, the supposed friendship between Miles and Shelby seems unbelievable. Bale and Damon play off of each other well enough, I just didn’t particularly believe that they were friends by the end.

The performances were well-done in spite of the characters’ lack of motivation. While the opening couple of scenes provide enough context as to why Shelby acts the way he does, the movie never gives the audience a reason why Miles wants to be a race car driver or explains where his passion for cars comes from. He could be an adrenaline junkie as a result of being a World War II vet, or maybe he’s inspired by someone from his childhood. The movie never says either way.

There are a few plot threads that feel underdeveloped, like the fact that there is never a follow-up or resolution to a point early on in the film when someone accuses Shelby of quitting racing because he “lost his edge.”

Interestingly, the film creates a wonderful subversion of the typical underdog storyline, almost by accident. Typically in a sports film, the underdog will have more heart or more skill, but the opponent will have the upper hand, whether that’s money or experience. This stacks the odds against the protagonist, but they will either win because they have what’s more important, or lose but take home the moral victory.

In the case of “Ford v Ferrari,” it’s Ferrari, the European rival, who has a passion for racing, while Ford, the American company, has the superior wealth to back their challenge. It’s a small observation that ultimately doesn’t amount to much but subverts classic tropes.

The central conflict between Ford and Ferrari doesn’t really concern our main characters. Miles and Shelby’s main conflict is the question of whether or not it is better to trust one’s own instincts or if they should cave to corporate pressure from Leo Beebe (Josh Lucas), Ford’s director of special vehicles, who does not like Miles and seems determined to personally screw him over. This ultimately resolves in a way that’s the expected conclusion, but the path getting there is unexpected.

“Ford v Ferrari” is not a film that necessarily has a lot to say. The most interesting question it raises is about who exactly is the underdog in this kind of story, an aspect that is underexplored. Beyond that it’s just a film about not giving in to corporate pressure, finding joy in what you love, how winning isn’t everything and how being a team player is important.

There’s nothing wrong with not having anything new to say though, and overall, this is a good movie, despite the fact that it has a few flaws. “Ford v Ferrari” may have crossed the finish line smoking, but at least it crossed it.