Opinion | End the trade war, but don’t let China off the hook 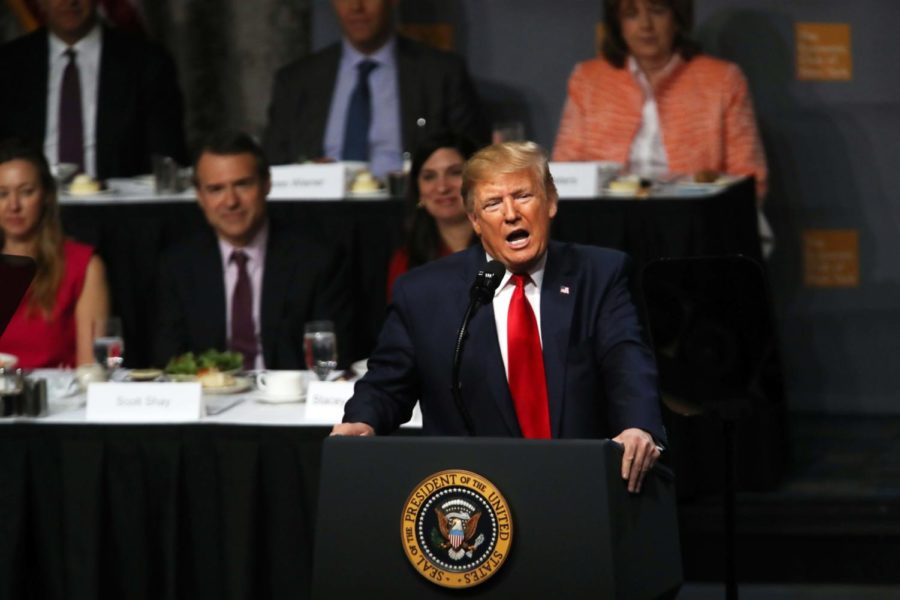 President Donald Trump speaks at the Economic Club of New York on Nov. 12 in New York City. Trump, speaking to business leaders and others in the financial community, spoke about the state of the U.S. economy and the prolonged trade talks with China.

With impeachment inquiries and presidential election challenges heating up, it’s been a chaotic month for President Donald Trump. Economic issues, which the White House has been quick to call attention to in the past, have been largely relegated to the back burner in light of the larger controversies surrounding the administration. The president has not ceded the upper hand, however, and continues to call attention to the success of the American economy, especially a revival of manufacturing that he claims the tariffs he has levied against China have sparked.

Unfortunately, much of this growth appears to have been temporary, and activity in the manufacturing sector is now at its weakest since the Great Recession of 2009, leading many economists to argue that the China-U.S. trade war is responsible. The tragic reality is that a simple cure for the economic obstacle China poses does not exist. This does not mean that, while tariffs have demonstrated their inefficacy, the president’s efforts are all for naught. Trump should look for another solution if he hopes to constructively punish Chinese policies that have reduced competition.

Little has been said among Democratic presidential candidates on this subject during their debates besides the typical line of attacks, and very few have proposed an alternative to the president’s approach. A rational plan of action against China’s human rights abuses, economic protectionism and intellectual property theft that the Trump administration has rightfully admonished has yet to be offered in any capacity. They first must acknowledge that tariffs, with all their heavy-handed intrusions into markets, have very limited practicality and are almost always counterproductive, leading to an escalation of trade tensions rather than negotiation.

One could certainly hope that tensions between China and the United States do not continue to accelerate, but a valid distrust of China that is shared among various political factions may make such an event inevitable. It also remains difficult to predict whether rumors of an approaching trade deal and tariff reduction — rumors which the president disputes, arguing that he hasn’t agreed to roll back tariffs — will do anything to calm those tensions. In the meantime, intensifying unrest in Hong Kong has led to renewed demands for U.S. involvement and weighed on China’s credibility in America. A Pew Research poll in August found that American favorability toward China — split until very recently — has dropped nearly 20% over the last 2 years, with more Americans viewing our economic relationship with the country as a threat. At the same time, the public still has an overall positive opinion toward international trade in general, meaning that the present issues are seen as China-specific.

What this means is that whatever approach Trump decides to take toward dealing with the economic challenges China poses likely won’t affect his re-election campaign, which will probably depend a great deal more on domestic issues. That leaves the window open for the administration to set its sights on tackling the Chinese government’s protectionism without shooting America in the foot.

This process should begin by leveling the playing field between American firms and competing foreign firms that operate in U.S. markets, since the latter have increasingly benefitted from explicit state subsidies and favorable treatment as part of an ambitious and intrusive Chinese industrial policy. A bipartisan group of senators led by Sen. Marco Rubio, R-Fla., introduced a bill to this effect, forcing foreign companies to abide by the same rules as American ones, earlier this year — a welcome alternative.

Although the goal is to punish China for heavy-handed market intrusions that have thwarted competition, surely an additional benefit could be forcing its hand into structural reform, characteristic of former Communist leader Deng Xiaoping’s Open Door Policy, which led to a large-scale rebuilding of China as a more market-based economy. Since that time, even while the dominant socialist institutions have remained in place, the People’s Republic of China has been morphed into a more democratic political system.

Unfortunately, new developments suggest that the end of this age of liberal reform may be near. Steps backwards have been taken on both goals under current President Xi Jinping, whose government has rubber-stamped, among other things, the end of presidential term limits and an Orwellian social credit surveillance system. Still a one-party state, China continues to be characterized as one of the world’s least free countries, in terms of political and civil liberties.

Even the smallest strides that could be made toward forcing China to be more competitive on international markets would be in the right direction — and if this can be done strategically, without violating either the trust of allies or international law, it would only be an added bonus. Regrettably, though, the Trump administration’s current tariff approach is delegitimizing the United States in disputes with China, leading the World Trade Organization to allow sanctions against U.S. goods, even while China’s violations of international trade agreements are numerous. Finding a resolution through global cooperation, however, is not likely to happen if retaliatory tariffs are the preferred tactic.

President Trump’s tariff policies and trade war against China have been the subject of many valid attacks by critics across the political spectrum who view it as disruptive of global markets and as primarily hurting Americans. Nonetheless, one need not be in favor of tariffs to argue that China’s violations of civil liberties and international law cannot be ignored, and that all nations share an obligation to oppose them whenever possible in a way that surpasses stark symbolism. Though pessimism is warranted, a political turnaround and revival of a movement toward democracy in China would be something to celebrate — certainly more than winning any trade war.