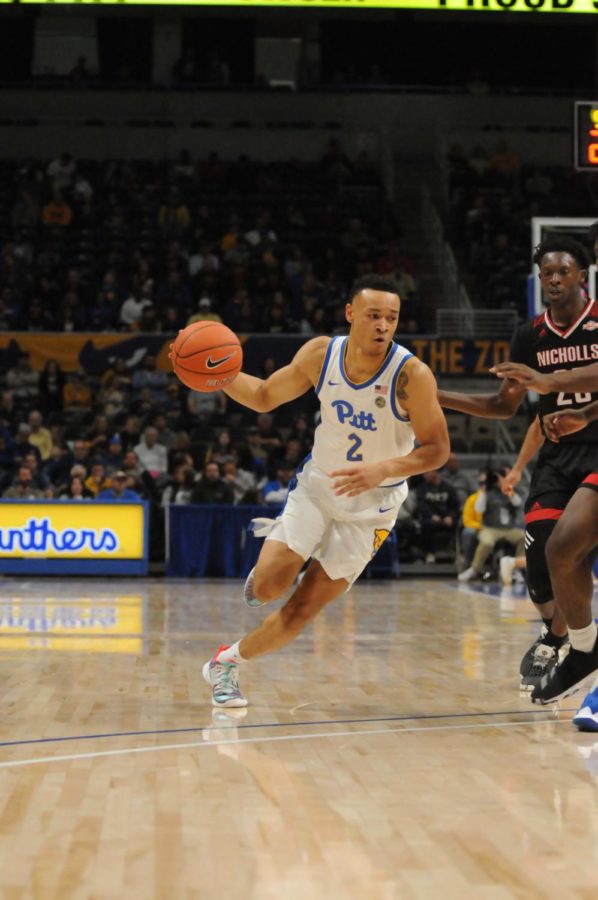 It’s typically unusual for a big, Power Five basketball school to take on a smaller, mid-major opponent at its home court. But with Robert Morris opening up its brand-new UPMC Events Center just 20 minutes up the road in Moon Township, Pitt took the call and made the brief commute to face the Colonials on Tuesday night.

The Panthers played spoiler to the introduction of their host’s new facility, beating RMU 71-57 to earn their first true road win since February 2017.

Pitt (2-1 overall) won a few neutral-site games last season, including St. Louis in New York City and Boston College in Charlotte, North Carolina. Still, this was the first time in Capel’s tenure that his Panthers beat a team in front of its own fans. And it didn’t come easy, with Pitt facing ample adversity early on.

“This was big for us,” Capel said. “They had a great environment, a hostile crowd, it was very passionate. When they made their 15-0 run it was loud. We could’ve folded, but I’m proud that we stepped up and made some plays and I think this will help us as we go forward.”

RMU stormed back with sophomore Dante Treacy knocking down three straight free throws after an ill-advised foul by Murphy. Senior forward Yannis Mendy then faked out a Pitt defender for a mid-range jumper, followed by another jumper from redshirt senior guard Josh Williams to tie the game.

A Pitt turnover from first-year forward Justin Champagnie kept momentum with the Colonials, and Williams hit a 3-pointer to give RMU its first lead of the game at 10-7. The Colonials expanded their lead with sophomore guard Jalen Hawkins making two free throws as Murphy’s second foul forced him to the bench.

After a missed layup from Johnson, junior forward DJ Russell converted an and-one in the paint on a foul by Gerald Drumgoole immediately following the media timeout. Junior forward Charles Bain made a 3-pointer, capping a quick and stunning 18-0 run that put RMU up 18-7.

Capel got his team together during the ensuing media timeout and told them to relax, something sophomore forward Au’Diese Toney found helpful for the team going forward.

“We were just telling each other to slow down,” Toney said afterward. “Just play hard and that’s what we did. We came out of halftime, just played hard on defense and everything else fell in line.”

The Panthers came back with an 8-0 run of their own as Brown sunk two free throws, Toney put back his own miss, Murphy sunk a three and McGowens flew in for a dunk. Johnson added to the run with his first points of the game, making two free throws and getting the Panthers back within one at 18-17.

Both Pitt and RMU kept it close for the next few minutes, scoring six points each. McGowens found Champagnie on an alley-oop and then made a tough shot to give Pitt a 3-point lead. Bain then connected on a 3-pointer after a bad turnover from McGowens, tying the game at 27-27 entering halftime.

The first-half box score showed Pitt enjoying a 19-15 rebounding advantage but also committing eight turnovers to RMU’s five. Johnson had an especially poor first half, scoring two points while shooting 0-5 from the field and turning it over four times.

Pitt got it going offensively early in the second half. McGowens continued to lead the way, making two layups and four free throws. Murphy displayed his long-range shooting with a 3-pointer and a mid-range jumper, while Brown converted an and-one opportunity to take a 43-35 lead with just under 15 minutes remaining in the second half.

Colonials junior guard Jon Williams made two 3-pointers and Mendy made a mid-range jumper to try and slow down the Panthers offense.

Coming out of the RMU timeout and subsequent media timeout, Pitt continued to play efficiently on offense. McGowens made another layup to score his 20th point and Johsnon made his first shot of the game, a 3-pointer.

With Pitt finally starting to find its groove, the Panthers held a comfortable 60-45 lead with 7:15 remaining at the next media timeout.

Both teams struggled to score down the stretch, with the Colonials actually outscoring the Panthers 12-11 for the remaining seven minutes. It didn’t matter, however, with Pitt holding onto its lead to earn the 14-point win.

Toney came alive in those final minutes, scoring seven points on a 3-pointer and four free throws, bringing him to 11 points on the game. Champagnie added two free throws to join Toney in the double-digit scoring club with 10 points.

McGowens, who finished with a team-high 25 points, playing well defensively with eight rebounds and four steals, said he felt more comfortable going up against the Colonials than he had in his first two games.

In the second half, both teams shot comparably, with Pitt shooting 46.2% and RMU shooting 43.3%. The main difference between the two came at the free-throw line, with the Panthers making 16 of 19 attempts, or 84.2%, while the Colonials didn’t take a single shot from the line.

Brown also turned in a well-rounded performance with nine points, six rebounds, five blocks and two steals. Johnson, on the other hand, finished the game 1-9 from the field with seven points, though he did hand out a team-high seven assists.

The next game marks a much bigger rival for the Panthers, as they’ll host West Virginia in the Backyard Brawl this Friday at the Petersen Events Center.