Experts’ tips for tenants: Read your lease, know your rights 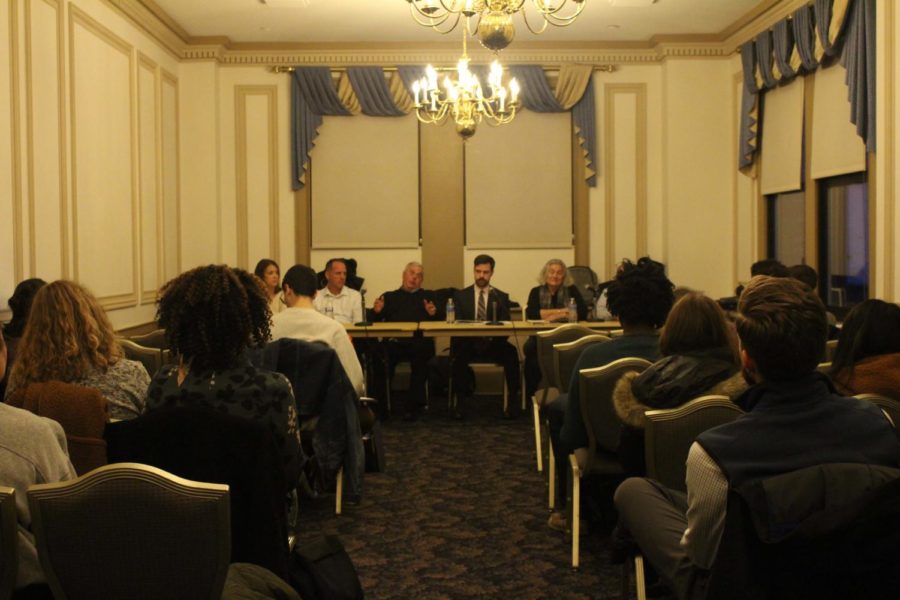 Pitt’s Student Government Board hosted the first of two tenant workshop panels Tuesday evening in the William Pitt Union to educate renters on their rights.

More than half of the Pitt student body lives in off-campus housing, according to a recent statistic from U.S. News and World Report. Some of these students commute from home, but many are renting apartments or homes in the Pittsburgh area — often for the first time.

To help the latest population of student renters, Pitt’s Student Government Board hosted the first of two tenant workshop panels Tuesday evening in the William Pitt Union to educate new and returning renters on their rights. About 30 attended the first event, and SGB will hold the same panel again Wednesday evening at 5 p.m.

Liz Gray, panelist and neighborhood quality consultant with Oakland Planning and Development Corp., said the most important step for new tenants is to read their lease.

“From the top of the first page to the bottom of the last page,” Gray said. “Then, go back and read it again.”

New renters often do not hold themselves accountable for knowing the rules of the lease they sign, Gray said. That can become a big problem when responsibilities come up that the tenant wasn’t aware of beforehand, such as paying for utilities outside of rent

When it comes to utility payments specifically, tenants should make written agreements with their roommates, Gray said, so that everyone is held accountable for their share.

“With utilities, if you’re sharing with people, get that in writing,” Gray said. “You’ll avoid a lot of aggravation if you have things written down.”

Tyler Viljaste, the community and governmental relations chair for SGB, organized and moderated the night’s event. He said the goal of the event was to help students be more informed about the things they may encounter when renting their first apartment or house.

Adam DiBuo, a partner at Neighborhood Legal Services, a Pittsburgh firm committed to protecting tenants’ rights, said understanding how much you should pay for utilities each month is just as important.

“You should make sure that you ask your landlord what each type of utility is,” DiBuo said. “If you have gas heat, if you have electric heat, what your hot water is, things like that. So, you can understand if you do have to pay for a utility, how much you’re going to pay.”

“I tell a lot of my tenants to call Duquesne Light,” Eckenrode said. “Give them the address, they’ll give you the budget.”

Bob Kelly, a realtor with John C.R. Kelly Realty, said that it is important to call your landlord if there is a malfunction with any of the utilities, as that could cost a lot of money down the line.

“Today, a toilet running full blast for a month costs $1,000,” Kelly said. “You have the responsibility to call your landlord, so they can do something about it.”

According to Kelly, utility costs also relate to tenant policies. Just because someone may be subletting a room and not have their name officially on the lease does not mean they are solely responsible for their actions if they do something wrong, he said.

Knowing when your utility is being used, DiBuo said, can help save money and ensure that you keep waste low. Something as small as a quarter-inch gap in your window, DiBuo said, lets just as much heat escape as a three-inch hole in the wall.

But unchecked windows aren’t just a financial concern, according to DiBuo — they’re also a safety concern.

Despite Oakland’s proximity to campus, students are still vulnerable to burglary and other crimes. But there are precautions that residents can take in order to protect their possessions. Brooke Riley, who works for the Pitt police community relations unit, said it’s important for students to always be aware of what is going on around them.

Riley said she tells students to keep one headphone out when walking at night so they can hear their environment. She also told students to utilize the blue emergency phones stationed around South Oakland, as a uniformed officer responds on location whenever one is activated.

Being an informed citizen does not stop when you walk out your front door, she said. Students living out in the Oakland neighborhood are responsible for the safety of their friends and peers. Riley said she gets calls from students whose friends became sick from intoxication, yet finds them alone on the sidewalk when she arrives on scene. But Pitt’s medical amnesty laws eliminate the responsibility of code of conduct violations for both the caller and the person experiencing the medical emergency.

“There are amnesty laws,” Riley said. “If you stay with that person, you’re not going to get in trouble. That person getting treatment and going home at the end of the day, that’s our number one priority.”

Jam Hammond, who works for the Pittsburgh Commission on Human Relations, previously worked at UPMC Presbyterian and was responsible for calling the parents of students that came into the hospital from 10 p.m. to 4 a.m. on weekends.

“I’ve never seen a Pitt police officer trying to interrogate a person for calling the Pitt police and have their friend brought to Presbyterian,” Hammond said.

Once students do get home from a late night out, Gray said, they shouldn’t have to worry about their renter’s policy or being taken advantage of by their landlord.

“Go to someone that is doing this as a business and not as a scam,” Gray said. “That’s what the difference is. Good landlords are in the business to make money and to work with their clientele. Scam artists are there to make money and they don’t care about anything else.”

Gray said she’s read contracts given to students by their landlords that require the renters to pay their rent in cash with low denominations. It is issues like this, Gray said, that students should be wary of when renting.

“If you see something you don’t think is right, say something,” Gray said.