Institutional Master Plan draft details the Oakland of the future 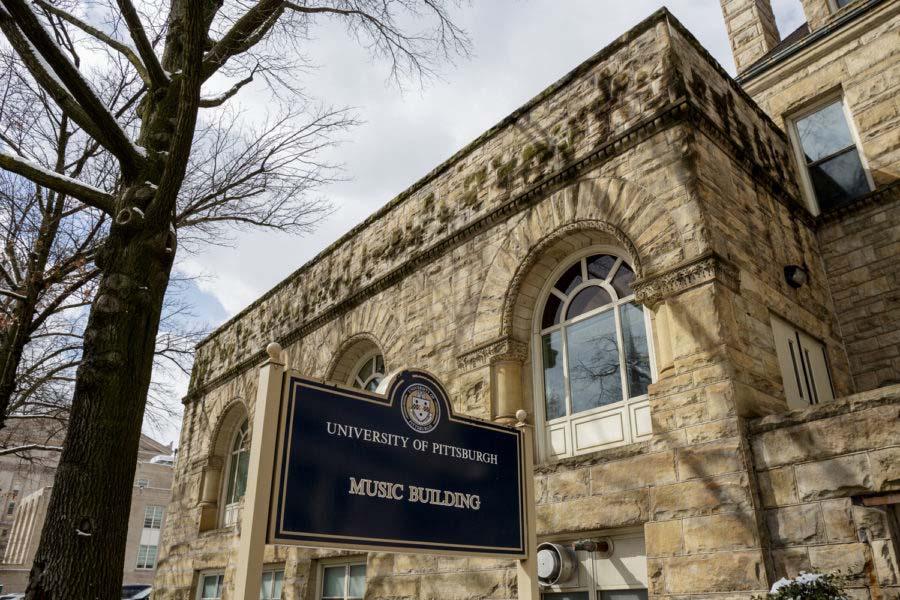 The Institutional Master Plan says that the Music Building should be maintained. Uncertainty about plans for the building has previously been met with pushback from the community.

The University released a draft of its Institutional Master Plan on Oct. 15, with proposed campus improvements to be rolled out over the next 10 to 25 years.

The 434-page plan includes pictures and detailed descriptions of renovations and additions planned for housing, recreational and departmental buildings on campus, as well as highlighting Pitt’s commitment to sustainability with new practices and resources. The IMP, which must still receive approval from both the City Planning Commission and the City Council, is based on Pitt’s February release of its finalized Campus Master Plan.

Changes to Pitt’s infrastructure include a new campus recreation center on O’Hara Street, an addition for the Petersen Events Center, new chiller plants, improvements to Litchfield Towers and new housing hubs across Oakland, amidst other small and large projects.

The IMP includes most of the CMP’s proposed projects, but some CMP developments are excluded.

The IMP does not include the CMP development of the BK Lot on Fifth Avenue between Oakland Avenue and Bouquet Street. This development of this lot, which consists of open space and surface parking, was a part of the CMP’s aim to “enrich student experiences.”

The CMP also mentioned “significant” renovations to chemistry facilities in the Chevron Science Center, but the IMP only mentions expansion for the building and does not address any renovations.

The CMP stated that widely used student facilities like the Crawford-Langley-Clapp Complex will also undergo renovations to improve the function and efficiency of the buildings.

Jeffrey Lawrence, the chair of the Department of Biological Sciences, said he is in favor of the proposed changes to Crawford Hall. He said teaching practices have changed since the Hall’s construction, so modernizing the building is necessary to help improve the department.

Other buildings utilized by STEM students at Pitt will also see improvements under the new plan.

The CMP includes renovations for Salk Hall, which currently houses the schools of Pharmacy and Dental Medicine. But the IMP mentions the possibility of relocating the School of Dental Medicine and redeveloping the site of the Hall’s annex.

Bernard Costello, the dean of the School of Dental Medicine, said he is in favor of the proposed changes to Salk Hall.

“We need more space,” Costello said. “We have a complex workflow, and we need teaching areas for students and teachers to create learning environments.”

While some departments hold a more favorable view towards the upcoming renovations in the IMP, Mathew Rosenblum, the chair of the music department, is not confident the plan considers campus arts programs.

The CMP includes demolishing either all or part of the historic Music Building, located at the corner of Fifth and Bellefield avenues, resulting in community backlash. The IMP states that the building should remain and that any possible renovations will retain the original building.

Rosenblum said the University has not openly discussed plans for the location of the music department with him or his colleagues.

“The new Bellefield plan has not been discussed with the music faculty or the chair,” he said. “We therefore do not believe that this plan is a priority or that it will ever come to fruition.”

Pitt spokesperson Kevin Zwick said the University has been diligent in listening to student and faculty needs during the planning process.

“The planned renovations under the campus master plan are aimed primarily towards enhancing the student experience,” he said. “They were developed after a long period of listening — to students, faculty, staff and members of the community.”

While the IMP aims to “enrich” the lives of students and the facilities used on campus, Rosenblum said he wonders if the University will fulfill the needs of its many different departments.

“This is a shameful situation, and in the ‘Year Of Creativity’ it seems even more incomprehensible,” he said. “When will Pitt actually take the arts out of the basement and celebrate creativity in a sustained and substantial way and truly support the departments on campus who are dedicated to the arts and creativity year in and year out?”