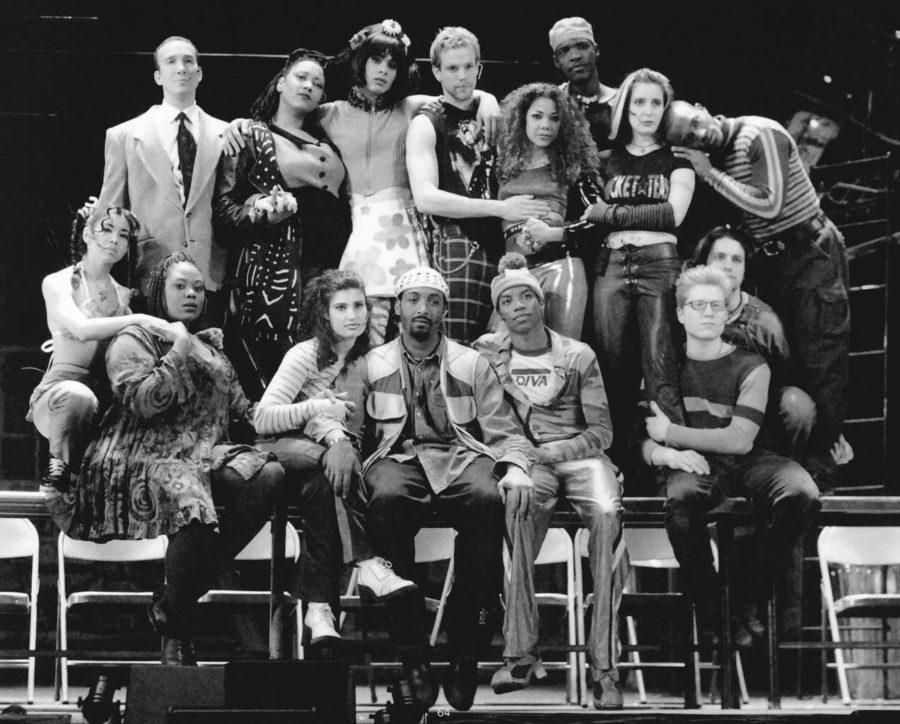 The original Broadway cast of Rent from 1996 poses for a group photo.

“Rent” is, in many ways, the “Hamilton” of the ’90s. Like “Hamilton,” “Rent” contained themes of rebelling against a corrupt system, featured a purposely diverse cast, and was an incredibly popular show, with “Rentheads” waiting hours outside Nederlander Theater. But now, more than two decades later, what is the legacy of “Rent”?

The Broadway musical began its run in 1996 and lasted until 2008, making it one of the longest-running shows to date. It was well received during its initial release, taking home Tony awards for Best Musical, Best Book, Best Original Score and Best Performance by a Featured Actor, and winning a Pulitzer. “Rent” had a large impact when it was first released, but looking back it is very much a product of its time.

Written by Jonathan Larson, “Rent” is based on Puccini’s 1896 opera “La Boheme,” but the story has been updated so the ensemble goes from a group of artists in Paris’ Latin Corner against the backdrop of tuberculosis to an ensemble of struggling artists in an HIV-afflicted New York City. The AIDS crisis is an important backdrop for the show. Half the main cast is HIV-positive, there’s a support group for people living with HIV that forms a Greek chorus at points and one of the main characters, Angel, dies because of it.

For people who did not grow up during that era, it can be hard to understand both how serious of an epidemic HIV/AIDS was and the extent to which it went ignored by the government. Lawmakers saw that HIV/AIDS largely affected gay men and attempted to moralize it. At one point, Ronald Reagan’s head of White House communications, Patrick Buchanan, wrote in the New York Post claiming AIDS was divine punishment.

“The poor homosexuals. They have declared war on nature, and now nature is exacting an awful retribution,” Buchanan wrote.

By the time the Reagan administration even started speaking about AIDS and ways to combat it publicly, more than 20,000 people had died. Characters in “Rent” periodically take the medication AZT, an early potential solution to AIDS that was incredibly expensive for those living with it.

In that sort of environment, it’s easy to understand why “Rent”’s portrayal of gay and straight characters with AIDS who were sympathetic, complex and, most of all, hopeful in the face of a death sentence appealed to people in the East Village.

A common motif in the show is “No Day But Today,” sung by the support group and other characters throughout the show as a part of the response to AIDS. The message is that even though they could die tomorrow, they should still appreciate life today. This hopeful message struck a chord with people like Sherri Weyent, a Renthead interviewed in 1998 for “The Philadelphia Gay News.”

“The story line has AIDS, but unlike a lot of other things using HIV and AIDS as a storyline, ‘Rent’ surrounds it all with a very positive message, ” she said. “‘Rent’ sends a message of optimism and is really about survival.”

Over time, though, “Rent”’s popularity has begun to wane. Some critiques of the play argue it is a relic of its time, especially the hard rock and grunge that is is much less prolific in 2019. In fact, the hard rock numbers have turned out to be not nearly as memorable as the more traditional Broadway numbers like “Seasons of Love.”

There have also been critiques from queer activists — including accusations of plagiarism. Sarah Schulman, an author and AIDS activist, claimed Larson stole the plot of his show from her book “People in Trouble.” Schulman’s 1984 novel was the story of a bisexual performance artist who dumped her male lover for a lesbian activist and caused a riot with her performance art that targeted a local landlord, which is remarkably similar to the plot of “Rent.”

Schulman had spoken with lawyers about suing Larson’s estate for plaigarism, but ultimately chose not to and has since expressed more frustration in how Larson “straightwashed” her work by making the central character the straight man as opposed to the lesbian couple. Furthermore, Schulman critiqued “Rent”’s lack of focus on the organization and activism done by gay men against AIDS.

“To have those pieces depict alone, abandoned gay men with AIDS who had no political movement and no community support was absolutely the opposite of what had already occured,” Schulman told the queer news site “them.us” back in January.

The death of Angel has also received accusations of being an example of the infamous “Bury Your Gays” trope, wherein LGBTQ+ characters would be killed off by the end of a story. Critics have argued that Angel’s death isn’t a true example of this trope, but can still leave a sour taste in one’s mouth, especially given that it is a modern retelling of “La Boheme.”

In the opera, it is not Angel’s counterpart, Schaunaurde, who dies, but Mimi’s counterpart. This is one of the show’s largest departures from the story of “La Boheme,” which just so happens to create a story where the gay couple suffers a tragic ending while the straight one perseveres.

These are all legitimate critiques of “Rent.” Given the increase in queer voices and AIDS activism, “Rent” would probably not have been as well received had it come out in 2019. The second it came out, people would be decrying it on Twitter for being yet another example of the “Bury Your Gays” trope, portraying a bisexual character who is unfaithful and focusing on the straight members of the cast more than the queer ones. We have had better queer representation in our media since 1996.

However, that doesn’t change the fact that “Rent” did a lot to humanize LGBTQ+ people and people suffering from AIDS in a time when they were feared or ignored. “Rent” touched a lot of people, gave them hope and paved the way for shows like “Hamilton.”

Like renting itself, it seems that “Rent” and its impact is neither wholly good or wholly bad.