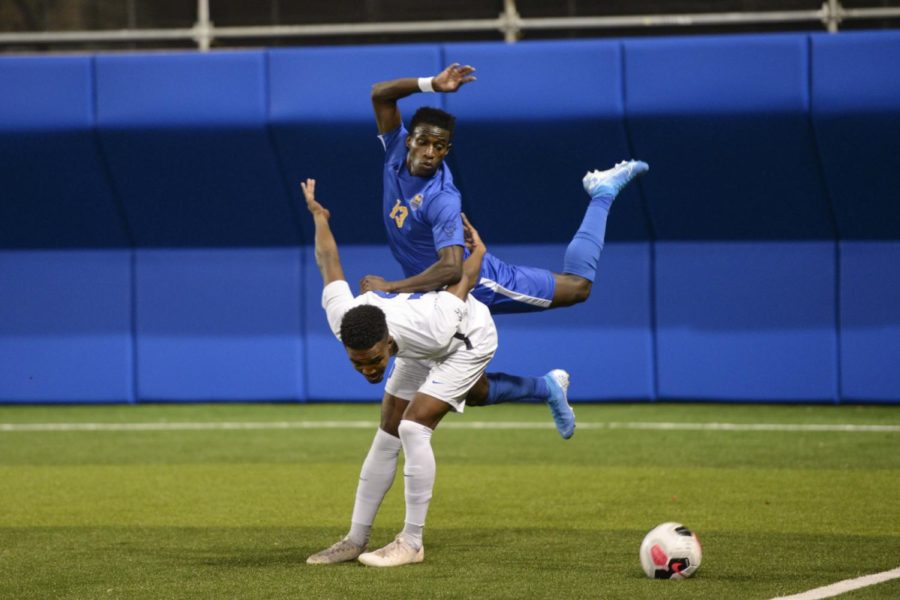 Despite the 1-0 loss to Clemson in South Carolina Wednesday night, the Panthers set new records by making it to the semifinal stage in the ACC tournament for the first time in program history.

No. 4-seeded Pitt and No. 1-seeded Clemson rocked back and forth to the very end in a competitive ACC tournament semifinal matchup. A single score in the 44th minute for Clemson proved too much for Pitt, which lost 1-0 in South Carolina Wednesday night.

With the win, the Tigers (16-1-1 overall) will move onto the ACC Championship game this Sunday against No. 2-seeded Virginia, which defeated Wake Forest 1-0 in the earlier semifinal match. Despite the loss, the Panthers (9-7-2 overall) set new program records by making it to the semifinal stage in the ACC tournament.

From kickoff, Clemson ramped up the pressure and got the first chance within the first 20 seconds, as junior forward Kimarni Smith shot wide left. Tigers sophomore forward Grayson Barber had another clear chance in the sixth minute after shaking Panthers’ first-year forward Lucas Cyriacus, but his pass was snuffed out by first-year defender Arturo Ordonez.

Pitt got their first chance from junior forward Alexander Dexter whose shot in the ninth minute was easily scooped by sophomore goalkeeper George Marks.

Clemson continued on the attack in the 10th minute, with junior defender Justin Malou delivering a smooth, arcing cross to Smith, whose header ended up going wide left for a goal kick.

The Tigers had their best chance of the half to take the lead in the 29th minute with first-year Phillip Mayaka shooting from outside the box, but his shot hit the right goal post. Redshirt first-year forward James Brighton then got the ball right in front of goal, but his rebound sailed over the goal.

Clemson finally broke the deadlock in the 44th minute, scoring the opening goal to take the lead just before halftime. The play was started with first-year defender Oskar Agren delivering a beautiful long ball to senior midfielder Tanner Dieterich, who made a delicate chest down pass to first-year midfielder Mohamed Seye. Then Seye, fresh off the bench, sent redshirt junior goal keeper Arie Ammann the wrong way and slotted the ball into the back of the net.

The halftime stats showed just how dominant the Tigers were in the first half. They tallied 10 shots and six corners to the Panthers’ four shots and two corners. They also doubled up Pitt in shots on goal, by a margin of four to two in the opening period.

After having his shot blocked in the 48th minute, Mayaka almost scored the second goal of the game in the 54th minute as he flicked the ball up to himself and volleyed it just wide right of goal.

The first real chance for the Panthers in the second half was a corner kick in the 61st minute by first-year midfielder Veljko Petkovic right on the head of Ordonez that went right at Marks for a save.

Clemson threatened again soon after with another attack in the 62nd minute. Barber’s shot was deflected and forced Ammann to hit it out for a corner.

The Panthers were led by Noel, who recorded three shots on goal. He was followed closely by Hesson and Cyriacus, who collected two each. Ammann turned in a strong performance in goal with four saves. But Ammann’s lone blemish was ultimately the most costly play of the match. Seye’s decisive goal sent the Panthers packing and halted their historic tournament run.

This loss puts the Panthers out of the ACC tournament, but it doesn’t mean their season is over just yet. Their run to the ACC semifinals strengthens their claim for an NCAA Tournament bid. The Panthers will learn the fate of their postseason position this Monday.