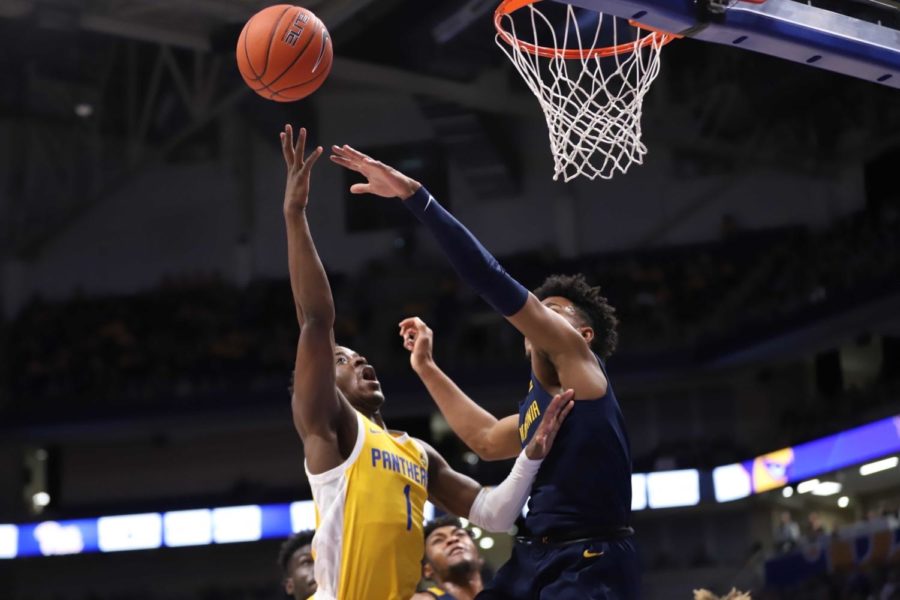 Sophomore guard Xavier Johnson (1) drives in for a layup.

75 miles and different shades of blue and gold. Off of the hardwood, not much separates West Virginia (2-0, 0-0 Big 12) and Pitt (2-2, 1-0 ACC). But on Friday night, a mere 20 minutes of basketball proved how big the gap remains between the two hated rivals.

West Virginia outscored Pitt 32-18 in the second half as part of a 68-53 win in the 187th meeting of the Backyard Brawl.

The Oakland Zoo sold out, filled up early and even shook laptops in the media suite 15 rows up. For the first time in more than half a decade, the two rivals received equal billing and it appeared that the Backyard Brawl had finally returned to its former glory.

But West Virginia head coach Bob Huggins found serenity and familiarity at the center of the noise. When asked if he said or did anything unique to prepare his team for the Petersen Events Center’s “hostile” environment, he offered a classic Huggins-ism.

“I never understood the word ‘hostile’ …” Huggins said. “I didn’t see anyone with spears or machetes or machine guns… I just saw a lot of people who paid money to come see a good ball game.”

Those patrons witnessed a sloppy and slow first half. The Panthers and Mountaineers combined to commit 24 fouls — likely not what the typical fan would consider a “good ball game.” But it was nonetheless entertaining and the dubiousness of those fouls might have been the only thing about Friday’s game to bring the rival fan bases together.

As a result of those fouls, both teams were unable to find a consistent offensive attack, except for WVU first-year forward Oscar Tshiebwe.

At 6-foot-9 and 258 pounds, Tshiebwe dominated the paint on both ends of the floor. He recorded a double-double in the first half alone with 12 points on 5-8 shooting from the field and 12 rebounds before the intermission.

And defensively, he was disruptive around the rim. The Panthers shot a lowly 6-16 on layups and 3-6 on dunks, which Pitt first-year forward Justin Champagnie credited in large part to Tshiewbe.

“Getting to the rim wasn’t difficult, but finishing around the rim was difficult…” Champagnie said. “Obviously [Tshiewbe] is a big kid, but it’s a man’s game.”

Because his teammates struggled with foul trouble, Tshiewbe was thrust into 34 minutes of action. In that time he used his size advantage against Pitt’s smaller forwards to collapse the defense with double teams and create opportunities for sophomores Sean McNeil and Emmitt Matthews Jr. to score from distance. The duo shot a blistering 5-7 on 3-pointers en route to a lead as large as seven with 4:16 remaining in the half.

Then, immediately following McNeil’s third 3-pointer of the half, sophomore guard Trey McGowens took over. He scored 10 points over the final 3:42 of the half. After stealing a defensive rebound from senior forward Logan Routt, McGowens nailed a 3-pointer on the other end to give Pitt its first lead of the game with 1:24 left in the half.

But that lead was short-lived. Sophomore guard Brandon Knapper took the inbounds pass and zipped down the court, weaving between a pair of Pitt defenders to reclaim West Virginia’s lead. The Mountaineers entered halftime with a one-point advantage, but still on their heels.

Bob Huggins’ squad flipped the script in the second half as quickly as the Panthers closed the first. West Virginia scored six straight points in a post-halftime blitz that Pitt never recovered from.

Before Pitt could even react, West Virginia’s lead ballooned to 12 just after the midway point of the second half. The Panthers mustered only 18 points on 3-25 shooting in the final frame. Capel thought his team stalled on offense and didn’t execute well enough to mount a counter attack.

“At times I thought we were rusheed,” he said. “We have some guys that say ‘I have to do it’ instead of ‘We have to do it, we have to do this.’ So we have a lot to grow in that aspect of the game.”

Despite how poorly they played, the Panthers still had a chance for a last-gasp comeback effort. With just over five minutes remaining, Pitt had cut the Mountaineer lead to 10 and showed signs of life for the first time since its first-half closing run.

But the possessions that followed shut the door for good. Pitt allowed Matthews Jr. to convert an offensive rebound untouched for two points. Then he quickly scored again with a layup on the ensuing possession. And with their team down 14 inside of five minutes remaining, Panther fans made for the exits.

Echoing his head coach, Champagnie accepted responsibility for the second half’s poor execution and acknowledged that teams don’t win when they aren’t connected for the game’s entirety.

“We came into here thinking we have to play 40 minutes and fight, fight together and fight as a team,” Champagnie said. “We did that for the first half, but in the second half it all fell apart and that’s on us.”

From there matters only got worse. A lazy inbounds pass from sophomore guard Xavier Johnson turned into an easy layup for senior guard Jermaine Haley. This was the cue for large contingents of visiting fans to break out in “Let’s Go Mountaineers” chants.

An errant alley-oop and two missed free throws were part of a nearly five-and-a-half-minute stretch in which the Panthers did not make a field goal, which only fueled the opposing fans further.

The lone bright spot of a disappointing night came from first-year forward Karim Couilibaly. The native of Mali, who saw his first extended game action of the season on Friday night, did not fill the stat sheet, but showed unexpected skill with the ball in his hands and held his own defensively, despite the overwhelming size disadvantage.

None of the Pitt players or coaches who answered questions postgame wanted to talk much about X’s and O’s. They instead chose to talk about togetherness, chemistry and trust. Those traits aren’t typically built in a weekend, but that’s all the Panthers are gifted.

Pitt gets two days off before welcoming Monmouth to the Petersen Events Center for a 7 p.m. tip-off on Monday.