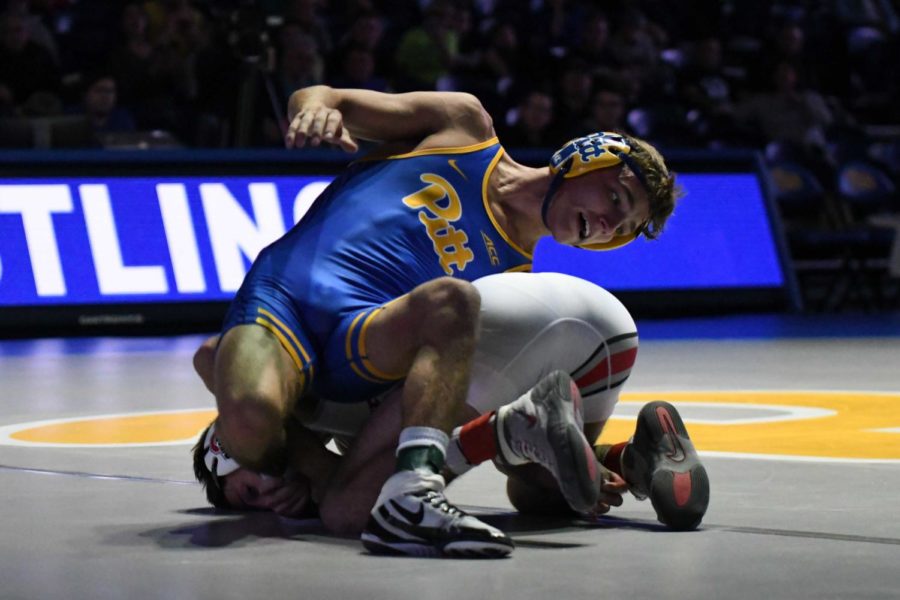 The up-and-coming Panthers hosted No. 3 Ohio State today in the Fitzgerald Field House in what could end up as their toughest test of the season. Despite putting forth a solid effort, Pitt fell 23-12, winning four of ten total matches.

Redshirt senior Kellan Stout kicked off the meet for the Panthers as he faced No. 1 redshirt senior Kollin Moore in the 197-pound bout. Stout had a rough outing, getting taken down and let up again mercilessly throughout the match. Moore showed off why he ranks above all the rest in his weight class, taking the match by a score of 12-3 without much difficulty.

Next for Pitt, No. 8 redshirt senior Demetrius Thomas took on No. 11 redshirt sophomore Chase Singletary. Thomas started off with a statement by taking down Singletary in the first period with one of the more explosive double leg shots you’ll ever see. But after two sloppy takedown attempts nullified by Singletary and over two-and-a-half minutes of riding time, Thomas found himself on the wrong side of the scoreboard, losing 8-3.

Pitt sophomore Louis Newell wrestled No. 20 Malik Heinselmann in one of the most exciting matches of the day. Newell quickly took down Heinselmann with a swift pull-through move, but let him up quickly only to get taken down and forced to escape himself. Heinselmann ended up on top by a score of 12-7 on the strength of two more takedowns, one of which earned two extra back points, and over a minute of riding time.

At the 133-pound weight class, No. 4 redshirt sophomore Micky Phillippi took on No. 14 Quinn Kinner. Kinner created the first points of the match, taking down Phillippi with a strong single leg attack, but Phillippi escaped and earned a takedown himself after a confusing scramble from both wrestlers. Leading by two points in the third period, Phillippi fought off a deep shot in from Kinner to hang on for a 4-2 victory.

Pitt’s up-and-coming No. 15 redshirt freshman Cole Matthews then faced No. 1 senior Luke Pletcher in the 141-pound match. Matthews looked poised to pull off an incredible upset early in the first period, getting behind Pletcher and slamming him to the mat for two points.

But Pletcher proceeded to remind everyone why he is ranked so highly and dominated Matthews for the remainder of the match. He took Matthews down five times in the second and third periods to win by a score of 23-9.

Next up for the Panthers was redshirt freshman Luke Kemerer wrestling No. 8 redshirt freshman Sammy Sasso. This match fared no better for Pitt than the last one, as Sasso put on another strong performance for the Buckeyes. An inside trip in the third period put Kemerer on his back and Sasso picked up the lone pin on the day.

No. 13 redshirt sophomore Taleb Rahmani earned a decisive win for Pitt over redshirt junior Elijah Cleary in the 157-pound match. The whole match was rather uneventful as Rahmani notched two strong takedowns and an escape point to take the lead over Cleary. It was a solid showing from Rahmani, who took the match 6-1 with another point coming from over a minute of riding time.

One of the closer matches came when No. 15 redshirt junior Jake Wentzel faced off against No. 14 redshirt sophomore Ethan Smith in the 164-pound weight class. The two went back and forth taking each other down and escaping quickly. But in the third period Smith elected to start from a neutral position, and Wentzel took him down. He then locked Smith into an arm bar and rode him out until time expired to take the 3-2 victory.

In the 174-pound weight class, redshirt junior Gregg Harvey wrestled No. 20 redshirt sophomore Kaleb Romero. Romero was forced to sit out for a moment and undergo evaluation for a concussion in the first period after landing on his head in a scrap. Once the trainers cleared him, Romero came back with a vengeance. He pulled off a powerful double-leg takedown on Harvey just before the first period ended and rode him for the whole of the second period. Harvey appeared utterly exhausted by the end of the match, and Romero took the win 6-2.

The last match of the meet pitted No. 9 redshirt sophomore Nino Bonaccorsi and redshirt freshman Gavin Hoffman against each other. Bonaccorsi started out with a controversial takedown that caused the Ohio State coaches to throw out the challenge brick, though the call stood. Bonaccorsi looked strong throughout this one, taking Hoffman down twice more in the match. He ended up beating Hoffman by a score of 10-5.

On paper, the Buckeyes will likely be the highest level of competition that Pitt will wrestle all season. The Panthers will look to get back in the win column next Sunday when they travel to Bethlehem to face another quality team in Lehigh University.

This was the last home meet for the Panthers until the end of January, as they travel for their next six dual meets and the Southern Scuffle tournament in Tennessee. It was sobering for Panther fans to see that their beloved squad can’t hang with the nation’s best quite yet, but encouraging that they kept it respectable. Pitt is a young team and it’s inevitable that there will be a few bumps along the path to success.