Opinion | Climate change should not be a partisan issue 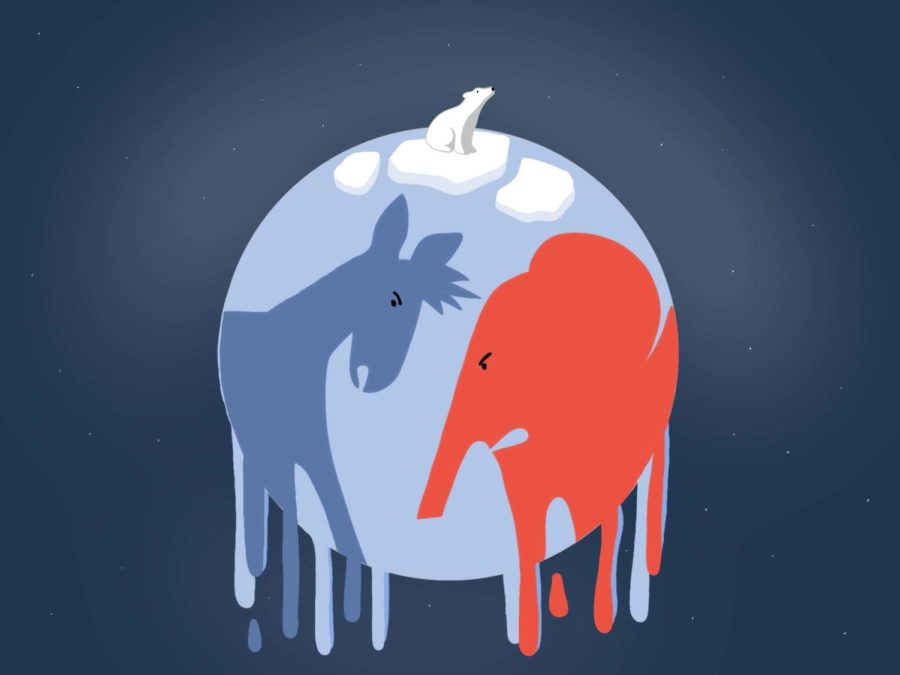 During the most recent bout of California wildfires earlier this month, President Donald Trump tweeted the Democratic governor of California, Gavin Newson, accusing him of “[doing] a terrible job of forest management” and saying that he must “‘clean’ his forest floors regardless of what [Newsom’s] bosses, the environmentalists, DEMAND of him.”

This accusation is grounded in the idea that the forest fires are caused by poor upkeep in the California forests, when in reality the main cause of the annually increasing intensity of the forest fires is climate change.

Newsom, in response to Trump, tweeted “[y]ou don’t believe in climate change. You are excused from this conversation.” While perhaps not the most diplomatic response, this exchange is reflective of typical relations between parties on issues relating to climate change. Often, the climate crisis is written off as a problem solely on the liberal agenda when, in reality, it is all encompassing.

Climate change is an urgent issue that requires aggressive and immediate action from politicians — and citizens, though they have less influence on policy — regardless of their partisan affiliations.

A survey conducted earlier this year suggests that only 21% of Republicans believe that Congress should prioritize finding solutions to climate change, while 67% of Democrats believe the same. The large margin between the two parties is typical of most surveys and studies on climate change, with Democrats routinely polling higher on questions concerning the importance and urgency of fighting climate change. This divide is perhaps the biggest obstacle to enacting the policies needed to effectively counteract climate change.

Thoughts on climate change were not always divided down the party line. During his 1988 campaign, George H. W. Bush addressed the issue of climate change, which was just becoming relevant to the public.

“Our land, water and soil support a remarkable range of human activities, but they can only take so much and we must remember to treat them not as a given but as a gift,” he said. “These issues know no ideology, no political boundaries. It’s not a liberal or conservative thing we’re talking about.”

Bush was absolutely correct in making this statement. Now it is more important than ever that politicians overcome their differences and find a way to compromise on policies to combat the climate crisis, especially as the situation is only worsening.

A group of Republicans — including former secretaries of state James Baker and George Shultz, as well as former Treasury Secretary Henry Paulson — proposed a carbon tax of $40 per ton in 2017, with the plan to increase the tax over time and distribute the collected revenue back to American citizens. This plan seems moderate enough to garner support from different politicians and — considering the promise of a dividend around $2,000 to be distributed annually — would likely appeal to the American public.

More recently, Republicans in Congress have been preparing plans that would call for reduced greenhouse gas emissions without decreasing dependence on fossil fuels or making a full switch to renewable energy.

The United Nations International Panel on Climate Change predicted that the effects of climate change would be irreversible by 2030. This means, as we approach 2020, that we have only a decade to reduce carbon emissions and make the switch to clean and sustainable energy sources. As such, there is no time for passive solutions to climate change, or solutions that will become gradually more serious. If we are going to combat this crisis, we need to do it aggressively.

While a carbon tax is certainly a viable option — and is especially useful for holding corporations accountable and getting them to reduce their emissions — it will not be enough on its own. We need solutions that help us convert to renewable energy and decrease reliance on fossil fuels, despite hesitations Republicans may or may not harbor. That’s why liberals are calling for the Green New Deal.

The Green New Deal is a plan to combat the effects of climate change by converting from fossil fuels to 100% renewable energy by 2030 — the final year before the 12-year timeframe predicted by the IPCC runs out.

For those who are worried about the cost of the Green New Deal — estimated to cost between $51 trillion and $93 trillion — the implementation of a carbon tax similar to the plan proposed by Republicans in 2017 could help offset the costs. Perhaps, rather than distributing a dividend to citizens, the collected funds could be used to support the proposed transition to clean, renewable energy and away from fossil fuels.

I will be the first to admit that some aspects of the Green New Deal are too radical to garner universal support on Capitol Hill. It would be a tough compromise to hash out, especially considering that it is often termed a “socialist nightmare” by right-leaning politicians and citizens alike, and perhaps it will not “largely [pay] for itself in health care savings from the prevention of fossil fuel-related diseases,” but it certainly will be beneficial in the long run.

Climate change will hurt all of us, no matter which political party we identify with. If we want to find a solution, we cannot treat it like a partisan issue.

Paige Lawler primarily writes about environmental policy and politics for The Pitt News. Write to her at [email protected]