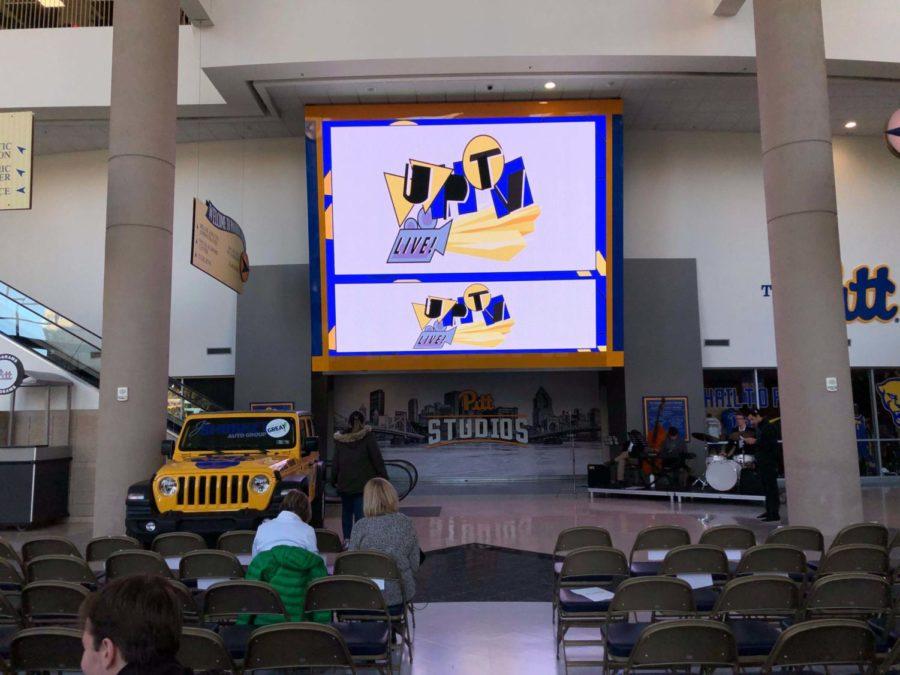 UPTV partnered with Pitt Studios for its first live broadcast from the Petersen Events Center, which included 10 UPTV shows.

UPTV, Pitt’s student-run television station, has been producing the late night talk show “Pitt Tonight” for four years, but it’s never been on a screen this big before.

The station broadcasted a new “Pitt Tonight” interview and a number of new clips from the station’s other shows on the Petersen Events Center’s jumbotron during the first ever UPTV Live event Sunday. Pre-recorded clips were introduced by host Jacob Mahaffey, a junior film major. The station collaborated with Pitt Studios — a multimedia and film production center unveiled in the Pete in October 2018 — on the event.

Though the studio space is often used for sports broadcasts, student organizations like UPTV and film classes have access to its professional equipment and set. About 30 chairs were filled at the event at the Pete Sunday, but that’s not the only way students watched. UPTV also broadcasted the event on its University TV channel 68.

In the “Pitt Tonight” clip, Andrew Dow, the show’s host, sat down with Chancellor Patrick Gallagher in his home to talk about student well-being, access to disability resources and the purpose of business on a university campus.

Ciera Thomas, a senior media and communications major, is the station manager for UPTV. She and the rest of UPTV held this event to give students a feel for what they do at UPTV, she said.

“We’re a lesser-known group on campus, so this is a great way for people to get to know who we are,” Thomas said. “We want to let them know that we’re important, we’re here and we deserve as much recognition as every other group on campus.”

The teams that produce each of UPTV’s shows created short films for the event in different genres, including horror, drama and satire. Though the club didn’t have the resources to organize the event last year, they are hoping to make it an annual event in the future, Thomas said.

Max Bruce-Rudge, a sophomore film production major, said that this space is a big change from what UPTV is used to. Ordinarily, UPTV broadcasts shows from its small studio in the William Pitt Union.

“Our space is basically a closet as it is now,” Bruce-Rudge said. “We have a lot more members than can fit into our space right now.”

Despite the close quarters, several new shows have been added to the roster this semester including “Femme,” a show written and directed by the female staffers. “Femme” debuted its short, “What If,” a story of a female student walking home alone at night.

Other shows produced by UPTV this semester include “Bully PulPitt,” a political news-in-review show, and “The Muse,” the network’s home for original, parody music videos.

There was also room for long-time favorites like the “Pittiful News Network,” a satirical news show.

“Our field reporter is on the scene of a kidnapping in Schenley Park right as we speak, talking to a few witnesses that were at the scene,” one of the anchors of the satirical show said.

In one transitional period between two clips, Provost Ann Cudd sat down with Mahaffey to talk about her effort in Pitt’s Year of Creativity during this academic year. This University initiative is focused on giving students access to more creative spaces on campus and partially funded the UPTV Live event.

Livia Rappaport, a sophomore film studies major, is the secretary of UPTV and co-executive producer of the event. According to Rappaport, UPTV has been working with Pitt Studios since April to prepare for the event. After several months, she said she is proud that UPTV Live has been given the opportunity to show the potential of the club to a wider audience.

“I don’t think they know about us as a resource for entertainment for people who want to create things together,” Rappaport said. “We have groups that do comedy, groups that do horror, we have a political science group. I don’t think that people know that we are such an extensive organization.”

As the UPTV team celebrated after their film debuts, the group wanted to make one thing clear, Rappaport said. They’re just getting started.

“We’re a group of really talented, really dedicated people and we can do something big,” Rappaport said.