Is Pitt basketball’s glass half empty or half full? 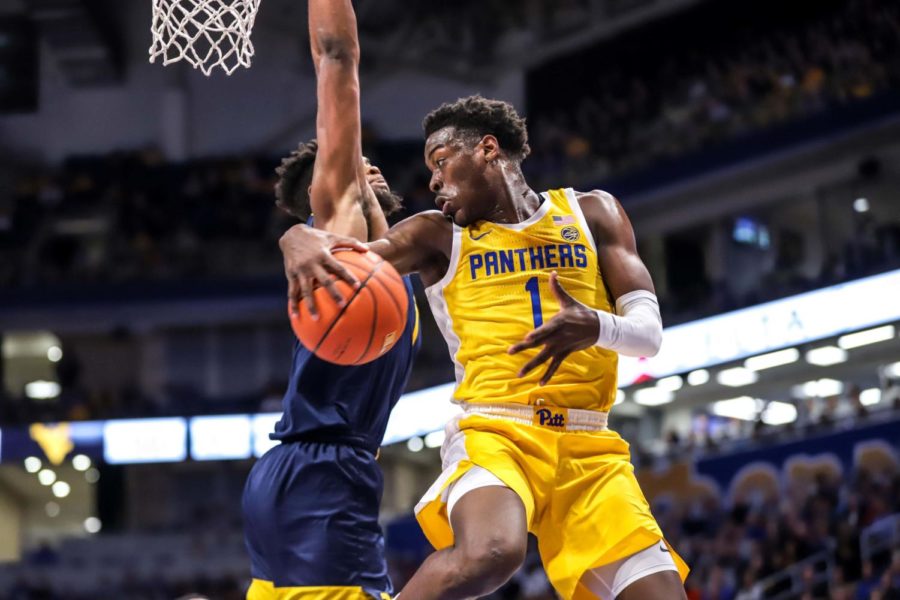 Xavier Johnson ranks seventh on the Panthers' with a field-goal percentage of 31.4%.

After an ugly second half that saw Pitt basketball fall 68-53 to West Virginia on Friday, it’s tough to tell how the Panthers (2-2) will fare from here on out. For a team that beat ACC foe Florida State but also fell to little-known Nicholls State, two opposing outlooks have emerged. Which you choose depends on your own point of view.

Pitt’s 3-25 shooting performance in the second half against WVU displayed what has been a major problem for the Panthers — they frequently can’t put the ball in the basket.

The Panthers rank 277th out of 353 Division I schools with a team field-goal percentage of 38.7%. Most schools below them are either branch campuses (see University of Texas at Arlington, University of Illinois at Chicago) or have a directional modifier in their name (see South Carolina Upstate, Central Connecticut). The only major-conference schools shooting worse than Pitt are Washington State and Florida.

Most worrisome of all is the fact that sophomore point guard Xavier Johnson, Pitt’s leading scorer from last season, has seemingly regressed. His season has been a nightmare so far — he ranks seventh on the Panthers in field-goal percentage (31.4%) and fourth in points per game (8.5), both significantly down from last season’s averages of 41.5% shooting and 15.5 points per game.

Maybe these first four games will go down as Johnson’s worst slump, a distant memory by season’s end. But while his current numbers are inevitably due for improvement, there’s also reason to believe that his struggles will persist throughout the season.

For one, Johnson lacks a clean jumpshot with which he can keep defenders at bay. His jumper looked funky last season and still has a noticeable hitch. There’s no fluidity from his knees to his release — he keeps the ball close to his chest for a split second at his apex, erasing all momentum from his legs and resulting in a forced motion with his shooting arm.

Oddly enough, Johnson is actually shooting better on 3-pointers (33.3%) than from the field in general this season. But that largely speaks to his knack for picking and choosing only the most open outside looks than it does his sharpshooting ability. Defenders know Johnson isn’t going to pull up off the dribble with much regularity or success, allowing them to take a step back and crowd the paint. This has negated Johnson’s elite slashing ability, and though his first step is still as quick as anyone’s, defenses are figuring out how to play him.

Johnson’s numbers are due to come up over the next couple weeks, especially with a soft slate of non-conference games. But his fundamentally flawed shooting form puts a cap on just how much his game can progress.

Perhaps overshadowed by Johnson’s struggles is the fact that his once highly touted classmate, sophomore forward Au’Diese Toney, has become borderline unplayable. He’s shooting 22.7% from the field, including a combined 0-11 against Pitt’s top two opponents, FSU and WVU.

It’s vital that Toney and Johnson — along with first-year forward Gerald Drumgoole Jr., who entered the season as a starter but has fallen out of the lineup after shooting 1-7 on the season — use the weeks before ACC play as a confidence builder. If their collective shortcomings continue over that time, Pitt fans should be genuinely concerned about the Panthers living up to their 10th-place projected finish in the ACC.

The Panthers are currently one of the worst teams in the country at keeping opponents off the glass, ranking 327th with a defensive rebounding percentage of 64.2%. Below them is Central Arkansas, above them is South Alabama — again, not the type of company you want to keep.

Terms like hustle, grit, heart and toughness are typically considered sports cliches. But these are concrete characteristics that the Panthers, specifically their big men, simply lack right now.

Pitt isn’t the tallest team, but size isn’t necessarily the issue. None of the top six rebounders in the country are taller than 6-foot-9. Junior center Terrell Brown and graduate center Eric Hamilton, standing at 6-foot-10, 235 pounds and 6-foot-9, 230 pounds, respectively, should theoretically match up fine against most opponents.

The problem is that they’re getting flat-out bullied by opposing players who seem to want it more.

WVU rebounded 19 of its own misses on Friday, led by eight offensive rebounds from first-year phenom Oscar Tshiebwe. Tshiebwe is one of college basketball’s best young bigs, but that’s an unacceptable number even if Wilt Chamberlain rose from the grave and played for the Mountaineers.

Again, there’s no reason to expect that Pitt will get better at rebounding throughout the season. Its big men aren’t going to magically put on 30 pounds each or develop higher motors at this stage of their careers. Sophomore guard Trey McGowens, at 6-foot-4, currently leads the team with 6.0 rebounds per game and could forseeably finish as the team’s leader in that category. If Pitt’s big men can’t rebound and its guards can’t shoot, the team faces long odds to hold its own in the nation’s best basketball conference.

For all the numbers and statistics going against Pitt right now, there’s a very important one that remains overwhelmingly in its favor — 1-0 in the ACC.

The Panthers have struggled, yes, but the optimist will note that those struggles came against non-conference opponents WVU and Nicholls State. What’s the point of non-conference games anyways, if not for a team to get acclimated and work through the kinks?

Pitt isn’t competing for an ACC title, but one of the foremost goals of any team is to place well within its conference. The Panthers are still on track to do that, with a one-game advantage on seven other ACC teams.

And though several Panthers have underachieved, a few more have outperformed expectations so far.

Junior guard Ryan Murphy has been everything Pitt could’ve asked for and then some, leading the team with 15.5 points per game on an efficient 47.6% from the field and 42.9% from three. With the ability to make shots in all three facets of the game, he’s easily the team’s most complete offensive player.

First-year forward Justin Champagnie has also been a pleasant surprise, stepping in as the most productive newcomer. His 8.8 points per game ranks third on the team, and that’s in spite of going 1-6 against Nicholls State and 4-13 against WVU. Those showings brought his efficiency numbers down, but his smooth shooting form indicates that better results will come. Throw in his switchable size and springy athleticism, and Champagnie also profiles as one of Pitt’s most complete players.

First-year forward Abdoul Karim Coulibaly could be another bright spot moving forward. He was expected to contribute instantly for Pitt but inexplicably played only four minutes in the team’s first three games. Coulibaly got his chance against WVU and displayed an encouraging amount of suaveness, fighting through the defense for two contested buckets in the paint. At 6-foot-8, he occupies a singular niche for the Panthers and should see more run at the four-spot with Toney trending downward.

And though the Panthers can’t rebound right now and will likely struggle all season, help is on the way in the form of 2020 recruit John Hugley. By all accounts, the 6-foot-9, 240-pound Hugley embodies the “junkyard dog” archetype of a ball-hawking big man. He should instantly eliminate many of the Panthers’ rebounding woes, though fans will have to wait another year to see him in action.

For now, Pitt fans can be optimistic knowing that the season is only four games in. Assuming Pitt’s breakthrough stars stay productive and its underachievers use the non-conference slate to get back up to speed, the Panthers are still in line for an improved season in the ACC — and that improvement should only continue next season.