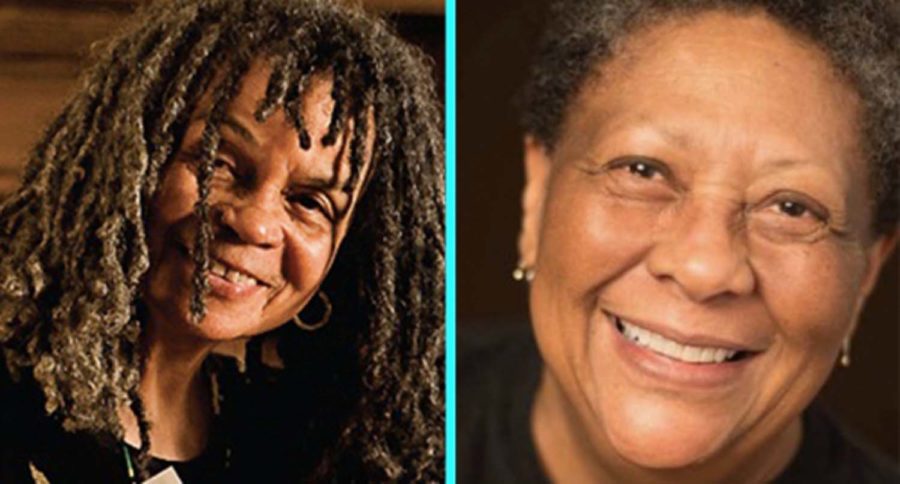 Poets Marilyn Nelson (left) and Sonia Sanchez (right) spoke about their works as a part of the first installment of the Center for African American Poetry Poetics Legacy Series.

Sonia Sanchez read a few of her poems at an event Thursday — not only that, but she also hummed, sang and chanted along with the various voices of her work.

Her poems are titled after the voices of her family members, who overtake Sanchez’s own voice and become speakers in the poems — which was reflected in her performance of the poem “Family Voices/Ancestors’ Voices.”

Sanchez and fellow poet Marilyn Nelson visited the Carnegie Lecture Hall for a reading, which was followed by a conversation about their work, in an event hosted by Pittsburgh Arts and Lectures and the Center for African American Poetry and Poetics.

“Our American literature,” Martin said, “and the vantage points from which we see this literature, may be just as constructed as race itself.”

First to read her work was Nelson, who draws largely on history for poetic inspiration. Nelson read her poem “Thus Far by Faith,” which she wrote after a visit to the Thomas Chapel Methodist Church in Hickman, Kentucky.

The church’s namesake, Warren Thomas, was an African American preacher known to deliver sermons to mules. The poem imagines several hypothetical sermons, including humorous addresses to mules and somber reminders of slavery’s legacy in the South.

“Beloved, stop your grumbling,” Nelson read. “Be the stars / what give a twisted generation light. / That’s what the book say. / But old Satan roars / louder, sometimes, than master.”

Sanchez’s poetry, on the other hand, tends to focus on her relationships with friends, family and even strangers around her. She followed Nelson with a reading from her book “Does Your House Have Lions?” which explores her relationship with her family and her brother’s death from AIDS.

Sanchez is also a prominent activist, having pioneered the black studies program at San Francisco State University, where she taught during the late ’60s. Between poem readings, Sanchez told the story of two black students whom she took under her wing. The two young women and their struggle to feel accepted in higher education led Sanchez to create a course on black womanhood, the first of its kind.

Yona Harvey, a CAAPP faculty affiliate who led the post-reading conversation, said she was left with the impression that both poets cared deeply about this kind of social change. She saw their passion for progress as a reason for their impact on American literature.

“They’re nurturing and powerful, and they take mentoring very seriously,” she said. “They don’t take themselves seriously. They care about politics and the social climate and the world. And they’re very invested in leaving the literary world and the world at large as a better place than the one they came into.”

In their conversation with Harvey, Nelson and Sanchez discussed their early lives and influences. Inspired by history and her father’s experience as a Tuskegee Airman, Nelson discussed the way that speaking with veterans left marks on her and her work.

She recalled one conversation she had with a former Airman about a game he played with one of his friends. He had a leaky air mattress and he frequently stole his friend’s mattress, replacing it with his own. When the friend died in combat and he inherited his mattress, he was haunted by the memory of “sleeping on [his late friend’s] breath.” Nelson said she felt that upon hearing this story, she was receiving a gift.

Similarly, Sanchez became emotional onstage while describing the legacy of her late friend and mentor, Gene Hudson, a librarian at the Schomburg Library in New York. Hudson introduced Sanchez to works by prominent African American thinkers such as Zora Neale Hurston, whose writing deeply impacted the way Sanchez thought about literature.

These influences on the writer’s work were of particular interest to members of the audience. Rosa Williamson-Rae, an English literature, English writing and Russian triple major, said they were not familiar with the poets’ work, but still found value in the reading.

“I thought the readings were incredible. And I thought the after-reading discussion was just really moving,” Williamson-Rae said.

Philippa Zang, a junior English Writing and Africana Studies major, had read their poetry before, and walked away from the reading with new insight to use in their own writing.

“I had also just been talking in one of my writing classes about how the voices of other people inform the voices in our work,” Zang said, “and I thought that was really beautifully demonstrated by Sonia Sanchez and Marilyn Nelson and the way that they took other people’s stories and shared them.”