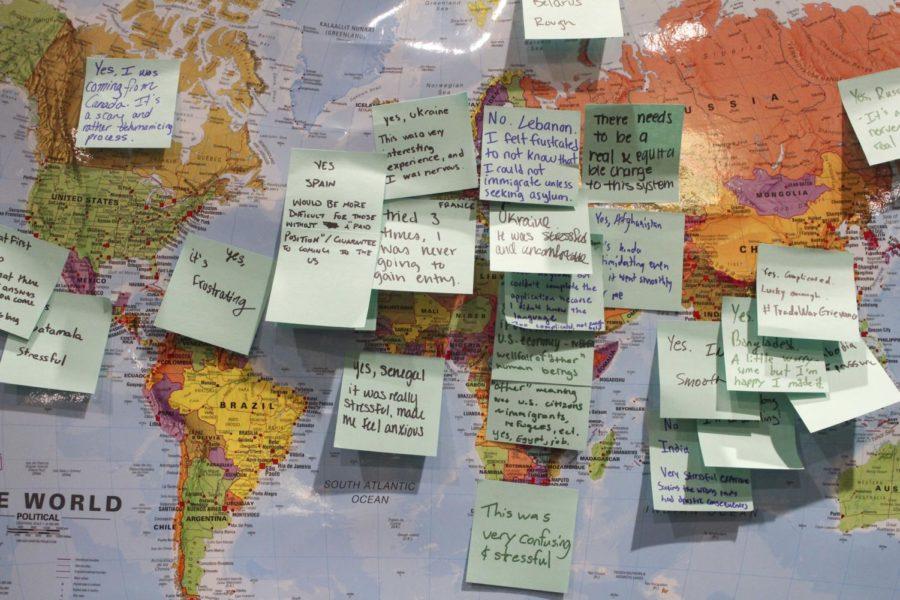 Students described their experiences on sticky notes with a mock immigration process based on which country they were assigned in the activity.

In a curtained-off section of the William Pitt Union Assembly Room, participants of the Boxes and Walls event are asked to take off their shoes and jackets and place them in bins before stepping through a mock metal detector.

This process was meant to depict the process of moving through security at the airport through the eyes of a Muslim individual — and there were noticable differences that Muslim individuals faced. Bewildered attendees are patted down head to toe, even in their hair, and are then interviewed by TSA agents — played by event organizers — who bombard them with a set of invasive questions.

Boxes and Walls, which took place this past Tuesday, is in its sixth year at the University of Pittsburgh and is hosted by the Office of Residence Life and Student Affairs Diversity and Inclusion Committee. It consists of a 30 minute tour through six interactive spaces where participants can experience simulations of marginalized groups around the world.

Student organizations and University departments like Panther CrossFit, ROTC and the Muslim and Filipino Student Associations applied to participate. They both generated ideas for the event and then executed them, simulating Muslim individuals in airports, everyday life for the disabled, southeast Asians facing deportation, veterans with PTSD, factory workers overseas and immigrants trying to gain entry into the United States.

Amanda Ries, assistant director of resident life and co-chair of this year’s Boxes and Walls event, said every year they make sure to reach out to all student organizations, but she especially wanted to connect with organizations involved with different cultural and social identities.

The William Pitt Union Assembly Room, in which the six interactive programs were set up, was divided into six spaces with black curtains. The tour began with an exercise, literally, in the life of disabled individuals, hosted by Pitt CrossFit, which demonstrated how they would modify exercises which had been designed for able bodied people to better fit their needs.

There were stations where attendees could jump rope with one arm, step up on a chair with their eyes closed to simulate a blind person’s experience or handle weights sitting down as an individual using a wheelchair would.

In the room hosted by the Filipino Student Association, participants navigated through the life of a Cambodian undocumented immigrant living in San Francisco with his family, who had lived in the country since age five and was facing deportation. No matter what choice was picked, the consequences were dire, often concluding with deportation and separation from family in San Francisco with no way back into the United States.

Ries said they’ve received feedback from previous years that indicated just how eye-opening the program was for students, particularly those who had some kind of privileged identity and had never experienced such things before.

“We have gotten lots of feedback that is particularly eye-opening, especially for students that have gone through this that hold some sort of privileged identity, “ she said. “It is a real opportunity for them to hear from their Pitt peers, how they may feel in the way that they walk the world and how that might look different based on an identity that you may hold.”

Jennifer Zellers, a first-year nursing major, said during the simulation of the United States immigration system she portrayed a woman from France trying to gain entry into the country, and was shocked when she was rejected after multiple attempts and told to keep waiting.

“One of the women leading the simulation said, ‘You’re done. You never would have gotten in, because you’re from France.’ I was like wow, that’s insane. I had things to bring to the United States, I wanted to make a business here and I just would have been waiting there forever,” she said.

Though most of the stations focused on marginalized people’s experiences in the United States, the Global Studies Center focused on the experiences of workers in garment factories overseas. Participants sat down at a long table to sew and cut up pieces of fabric in an imitation of what garment workers in factories do everyday. Volunteers from the Global Studies center set up a time limit and belittled attendees while they worked to simulate the factory environment.

Ries said these kinds of experiences help to expand cultural understanding across the community with the hope that, once exiting the experience, people will look into how to advocate for the individuals who experienced such oppression.

“People who participate say that this has been helpful for them in understanding their own cultural awareness and understanding how to advocate for those who may have marginalized or oppressed identities,” she said.

Morgan Kitsler, a first-year psychology major, said the experience made her realize just how blind she was to the issues going on in marginalized groups and that the issues these people face, though they can never be fully replicated, can be more understood, should someone take the opportunity to try.

“It really allowed me to be put into the shoes of people actually experiencing these issues and learn about oppressed groups in general,” she said. “I felt kind of blind to the things happening. I guess I knew about all of them, but truly going through the experience, it was eye-opening.”