Spend six weeks with “The Wolves” in one night 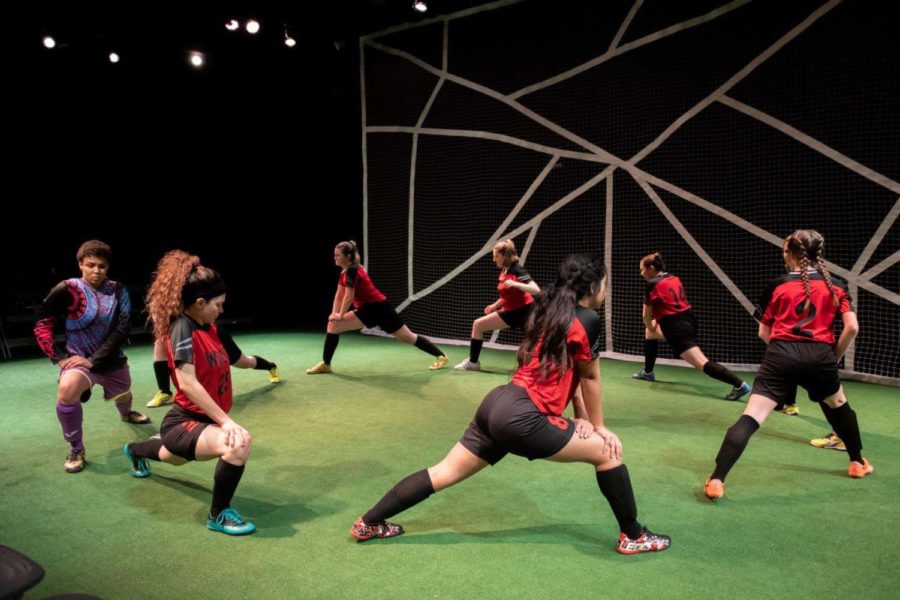 “The Wolves” storyline follows six weeks in the lives of a girls’ soccer team.

A group of girls sit and stretch on the artificial grass of an indoor soccer field. They chat and laugh, like girls often do. Over the course of six weeks of practices, this ordinary high school soccer team becomes anything but.

Pitt Mainstage’s performance of “The Wolves,” directed by Kelly Trumbull, a visiting assistant professor in the Theatre Arts Department, opened this past Thursday, Nov. 14, at the Richard E. Rauh Studio Theatre. The story is centered on six weeks in the lives of a girls’ soccer team, the titular Wolves, and was originally written by Sarah DeLappe. It premiered off-Broadway at The Duke Theater in New York City in 2016 and went on to be a finalist for the 2017 Pulitzer Prize for Drama.

During these six weeks, the team gains a new member, struggles with injury and has interpersonal drama, all of which culminates when a tragedy strikes in the fifth week of the season. By the end of the play, it’s clear that in the face of tragedy, the girls view their lives and what is truly important to them in a different way than they had at the start.

The moment the lights came up on the actors Thursday night and they all started chattering while doing their stretches, I was suddenly thrown back to my own practices with my high school girls’ rugby team. In the back of my mind I was filling in names and faces in place of the characters — an intended reaction, given that none of the characters actually have names.

The characters are only listed in the program with their jersey numbers, and the one character who isn’t a member of the team is simply “Soccer Mom.” By the end, the audience only learns a couple of their names, and really only one name is repeated enough that it can’t be easily missed. Otherwise, these girls are nameless, free to be filled in with whoever the audience can think of, which speaks to the strongest part of this play’s script — how relatable the characters are.

These are just your average high school girls who talk about boys and their hopes for college. They talk about topics they know little about — like the actions of a Cambodian dictator — and say things without thinking and hurt each other. But they’re not malicious, they’re just flawed, and after they hurt people, they try to apologize with varying degrees of success. These characters feel like real people who are on a soccer team together. Maybe they’re not best friends, but they know each other well and certainly get along.

The set for the play is minimalistic, featuring just a stage filled with fake grass and a soccer net. There are a few props used by the characters, like a bag of orange slices, and the soccer balls the girls practice with, this allows the excellent acting and brilliant dialouge to speak for themselves.

The play doesn’t have an intermission, and the changes between scenes are clearly marked by the projected text listing what week it is along with a sort-of chapter title that’s related to what the girls are talking about when the lights come up again, these little clues are just enough context to help the audience figure out what is going on in the scene.

Each scene is of the girls before or after a game. The audience slowly finds out about each of these girls’ home lives and past experiences via their conversations, which are often unrelated to their backstories. #2 has religious parents and a seemingly conservative upbringing, #13 is a bit obnoxious and doesn’t consider the consequences of what she says and #25 is the team captain who doesn’t like being disobeyed.

Very few of the conversations carry over from one week to the next, with each scene opening up on a completely different conversation. The scenes that are followed up on have extra weight to them, like when #7 and #14 end one scene talking about weekend plans and start the next in the middle of a fight. The audience has to reorient themselves to figure out what exactly happened to cause such a large shift— but the transitions are easy to follow, thanks to Trumbull’s masterful direction. For the most part though, the dialogue is just characterization, and DeLappe’s use of dialogue to tell the audience about these characters and their relationships is masterful.

But a strong script alone isn’t enough to make a good show. In the few times the team’s anxiety-ridden goalie #00 speaks, first-year Cadence Reid puts a lot of power behind her words. Her first lines come at the very end of the first scene, where she gives her opinion on the Cambodian dictator, that he deserves what has happened to him, and in doing so, reveals more about herself. Reid and the other actors bring the characters to life and, through their portrayals, show that they have whole lives outside of what the audience sees in the brief vignettes of the play.

“The Wolves” does not feel like watching a play. It feels like watching a group of girls grow up, make mistakes and try to figure out how to navigate the world and the people around them. The entire cast and crew should be proud of this performance and I must insist that if you can, go see this play.

“The Wolves” runs until Sunday, Nov. 24, at the Richard E. Rauh Studio Theatre.