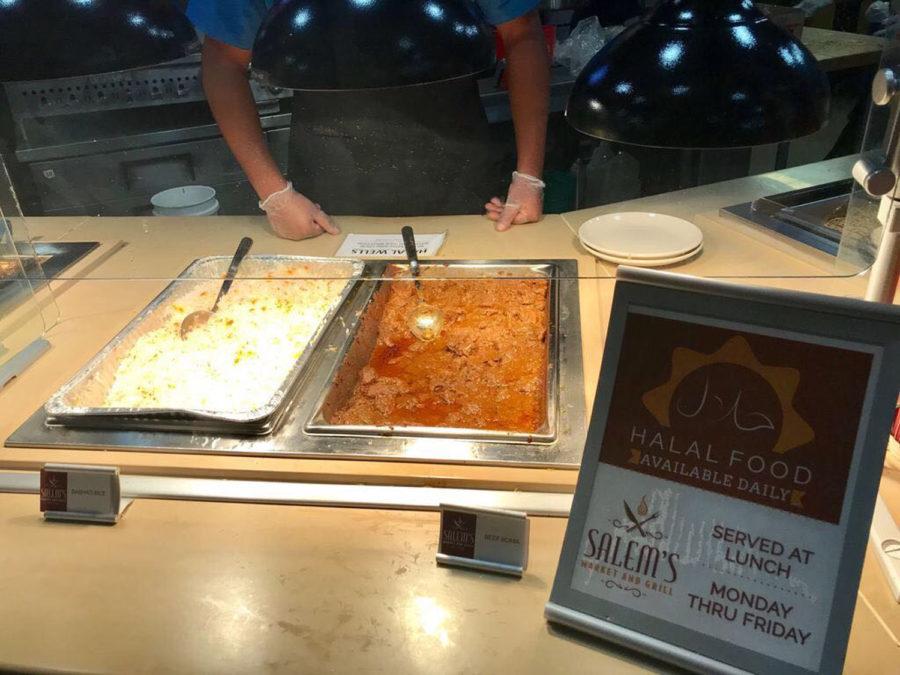 Waffles. Pasta. A bagel before class every now and then.

When first-year Zainab Akhtar was choosing a dining plan, she said, Muslim friends advised her to get as few swipes as possible, because Market didn’t have much for people who choose to eat halal food.

“They have vegetarian options, but every time I went I usually just got like, the pasta. And I didn’t go that often because whatever they have, it looks good but it’s all just meat stuff,” Akhtar, a psychology major, said. “I usually don’t go to Market Central at all until this past week.”

Akhtar now swipes into Market almost every day for lunch and heads for the new station at Magellan’s, where Pitt Dining is now offering lamb curry, chicken kebab, shawarma and more between 11 a.m. and 2 p.m., made by popular local halal restaurant Salem’s Market and Grill.

The new station is the first step in an initiative helmed by student organizations, Pitt Dining and Salem’s — and it’s moving along quickly since efforts began this semester. Salem’s has been temporarily stationed in Market Central since Nov. 4, and a permanent station in Market to Go is planned for next year.

Halal is an Arabic word meaning lawful or permitted and can be used to describe food defined as permissible to consume in the Quran. Pork is a common example of haram, or non-halal, food. Muslims who observe Islamic dietary laws may also take into account the cut of the meat or how it is processed — so finding food in Oakland can be difficult for some students.

Rabia Khan, the president of the Pakistani Student Association, and Aliana Rao, a board member, said Pitt’s Muslim community had been trying to get more halal food options on campus for a while.

According to Pitt’s Sodexo manager Abdou Cole, Pitt Dining created a halal menu cycle in 2011, following a meeting with the then-leaders of the Muslim Student Association. At the time, Pitt Dining chose Midamar, a halal food vendor, to serve lunch and made-to-order meals for dinner at Magellan’s.

But according to some students, those options weren’t sufficient. Khushana Chaudhri, president of MSA, said the food was often limited to pescatarian and vegetarian options. While those meals are technically halal, Muslim students wanted more meat options.

“I’m not a vegetarian, I crave meat too,” Chaudhri said. “So there’s some days I don’t eat because it’s not as available to me.”

In addition, Rao said, the halal lunches at Market would run out quickly.

“And of course we want everyone to have [the halal food], but it’s hard when people who only eat halal can’t have that option,” Rao said. “It would run out in like 20 minutes, so if you hit it before the lunch rush, you’d get it, but if you walked in at like 11:20 you’d miss it.”

Students also said the food served at the previous halal station was sometimes not actually halal, including ham and other pork products. A photo obtained by The Pitt News shows ham being served at the halal food station in Market Central in mid-October.

Cole provided a certification stating that all food served by Midamar at Magellan’s was verified as halal by the Islamic Services of America. He said the ham in the picture was placed in the hot well due to human error.

“This was an isolated incident that has been addressed and process put in place to prevent any future occurrence,” Cole wrote in an email.

Khan said Muslim students in previous years had sought to establish a more extensive and reliable halal meal option at the University, but talks had stalled. Abdullah Salem, the owner of Salem’s Market and Grill, which moved from Oakland to the Strip District about 10 years ago, said he had spoken with Muslim students in the past about the need for more halal options at Pitt and has proposed setting up a station at the University.

“Pitt’s a big university, so it has lots of deals with open corporations … as a small local company it’s harder for us to get in there,” he said. “Salem’s [has] established itself a lot more from where we were 10 years ago, we’re even more ready than we were back then.”

This year, Salem reached out to PSA and asked if they were interested in renewing the effort. The students were excited about the idea — Khan and Chaudhri said Salem’s was a natural choice for a vendor, since it’s a fairly popular place and many students, Muslim or not, love to visit.

After hearing from Salem, PSA reached out to MSA, and the organizations crafted two plans to present to Pitt. A short-term plan involved creating a menu highlighting halal options in Market, while the long-term plan was creating a permanent station for Salem’s. They began reaching out to administration in October.

Khan and Rao cited the involvement of a large number of people and support from Salem’s as helping make the push successful this time around.

“We had an actual idea of what to do, and were not just like, ‘We want halal food on campus,’ but we had a vendor,” Rao said.

Khan also cited students, alumni and parents reaching out about the need to “the right people,” including Joe Beaman, the director of dining services, Dean of Students Kenyon Bonner and Chancellor Patrick Gallagher, who all supported introducing a new option.

PSA and MSA also spoke with Cole, who met with the students and arranged a tasting of Salem’s food on Oct. 28. Pitt established the temporary station in Market the following week.

The station currently serves about 400 pre-cooked meals per day for lunch. The menu is based on students’ favorite dishes at the tasting, Cole said.

Students said they were pleased with how quickly the initiative has been moving and that Salem’s is presenting meals from different majority-Muslim countries. Rao said Pitt having a stronger halal food presence has interested some of her peers not yet in college.

“As a Muslim student in America, [halal food is] not always a guarantee. Schools that have them, they get ranked higher,” she said.

Following winter break, the plan is to create a new temporary station for Salem’s in Market to Go near the existing kosher station. And after Towers is remodeled in summer 2020, a permanent cart will be established in the same area, allowing Salem’s to cook meals for all Pitt students on the spot.

“Pitt’s a very diverse environment, and we believe we’re a diverse place,” Salem said. “We like to say we’re the closest thing to home no matter where you’re from. Salem’s is for everybody.”