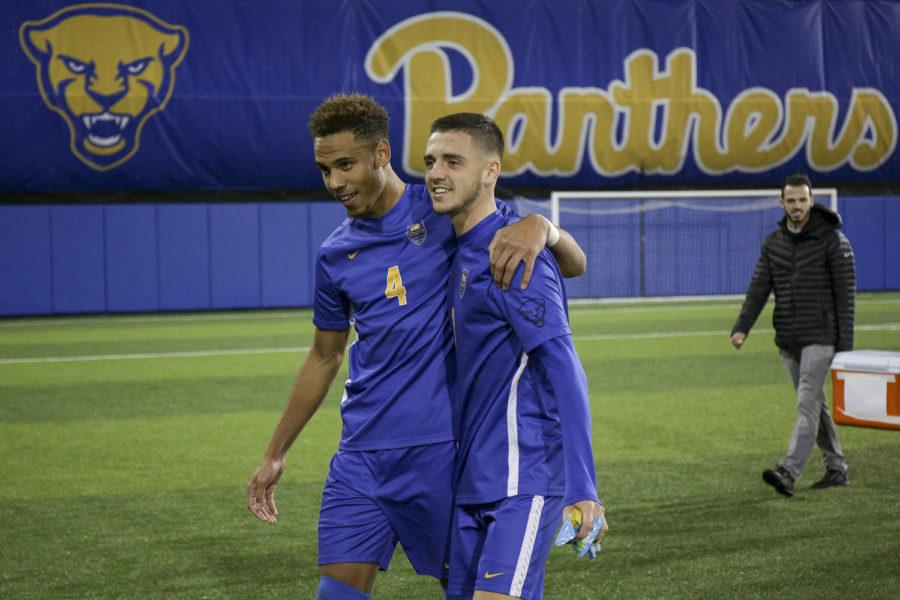 Playing one of its most meaningful games in program history, the Pitt men’s soccer team didn’t back down from the hype, defeating Lehigh 2-0 Thursday night at Ambrose Urbanic Field in the first round of the NCAA Tournament.

It was the Panthers’ (10-7-2) first NCAA Tournament appearance since 1965 and their first tournament win ever. They will advance to the round of 32 to take on No. 3 seed Georgetown this Sunday, Nov. 24, at noon.

With junior forward Edward Kizza on his right and sophomore midfielder Jackson Walti on his left after the game, head coach Jay Vidovich expressed what it meant for the program to clear such a hurdle in his fourth year as Pitt’s head coach.

“My expectation was to win games, go to the championships,” he said. “That’s why these two guys came, and the rest of the guys. That’s what I want to do — I don’t want to do anything else.”

The Mountain Hawks started the game with momentum, forcing the Panthers to turn the ball over and make bad passes while also threatening to score.

Lehigh sophomore Josh Luchini — a Wexford native and former North Allegheny High School star — nearly scored in the second minute of the game, stealing the ball off junior defender Bryce Washington. He drove right at the goal before his shot was stopped by redshirt junior goalkeeper Arie Ammann.

Luchini had another chance to give the Mountain Hawks the lead in the 13th minute, taking the ball from sophomore midfielder Jackson Walti and attempting a chip shot over Ammann that was easily saved.

Walti admitted afterward that some of his early mistakes could be attributed to the nerves of playing in such a high-stakes contest.

“I think it was just a little bit of nerves, first NCAA Tournament game for us … took a moment for me to get in the match, which isn’t good,” he said. “But even with that, a little bit of sloppy play from myself and some of the rest of the guys, we got the win. So, it’ll be better by Sunday.”

Pitt went on to make the most of its first attempt on goal, taking the lead in the 18th minute and never looking back. First-year defender Arturo Ordonez made a great cross-field pass to junior forward Alexander Dexter. Dexter got the ball, headed it over sophomore midfielder and defender Dawson Berger, then delivered a great pass into the box to fellow junior forward Edward Kizza. Kizza had the ball stuck at his feet but managed to get it into the back of the net to make it 1-0.

The Mountain Hawks’ last chance of the half came from junior defender Tyler Dressman as he took a shot and skied it in the 20th minute.

Pitt had two more shots blocked in the 34th minute, first a bicycle kick from Ordonez and then a powerful shot on goal from Dexter.

The Panthers finally put another ball through to double their lead in the 44th minute and entered halftime up 2-0. First-year forward Josh Hesson put the ball in front of goal, where Washington got to it first and flicked it with the outside of his right foot to put it past senior goalie Will Smith. Washington’s first ever goal as a Panther couldn’t have come at a better time.

“I think it would have been a little bit different if it was 1-0 and if we’d missed another opportunity,” Vidovich said. “I think it was a fantastic time to find a goal.”

The halftime box score showed the Panthers’ advantage in every offensive facet of the game. They had nine shots to Lehigh’s four, four shots on goal to Lehigh’s three and also created three corners, with Lehigh having none.

The second half was more of the same, with Pitt frequenting Lehigh’s half of the field. The Panthers again outshot their opponent 9-4, but none of their second-half shots found the back of the net. Part of that had to do with an improved performance from Smith, who recorded four saves in the second half.

“Great two-goal lead going into the half,” Vidovich said. “Just not … we feel like we squandered some chances there in the second half to put the game away.”

Noel had a good look in the 56th minute from outside the box with a low, powerful shot that was saved by Smith. Kizza had another great chance in front of goal but was stopped by Smith once again in the 60th minute.

Pitt’s last chance of the game came in the 79th minute as first-year midfielder Veljko Petkovic’s cross was tipped by Smith, followed by a volley by Dexter that went just far right for a goal kick.

Luchini almost scored in the 87th minute, receiving a cross in front of the goal but sailing it high over the crossbar. Junior midfielder Trevor Koski had one last chance to get a goal for the Mountain Hawks in the 90th minute, but his shot also went up and over the goal, hardly threatening Ammann.

Pitt’s players enjoyed the historic win as time expired, but it didn’t take long for them to shift their focus onto Sunday’s game against the Hoyas. Walti said afterward that he and his teammates are excited — but not satisfied — with just a first-round win.

“It’s a big one, it’s a great feeling,” Walti said. “We know we haven’t been here in 54 years. We never got the victory before. With the quality of the players we have, the quality of our play, this one victory is not enough to satisfy us. Hopefully a lot more games to go and it starts Sunday.”