Pitt volleyball has built a reputation as today’s most dominant Panthers team, and their undefeated conference record and No. 2 ranking backs that claim up. But only one thing has proven capable of slowing down the Panthers. 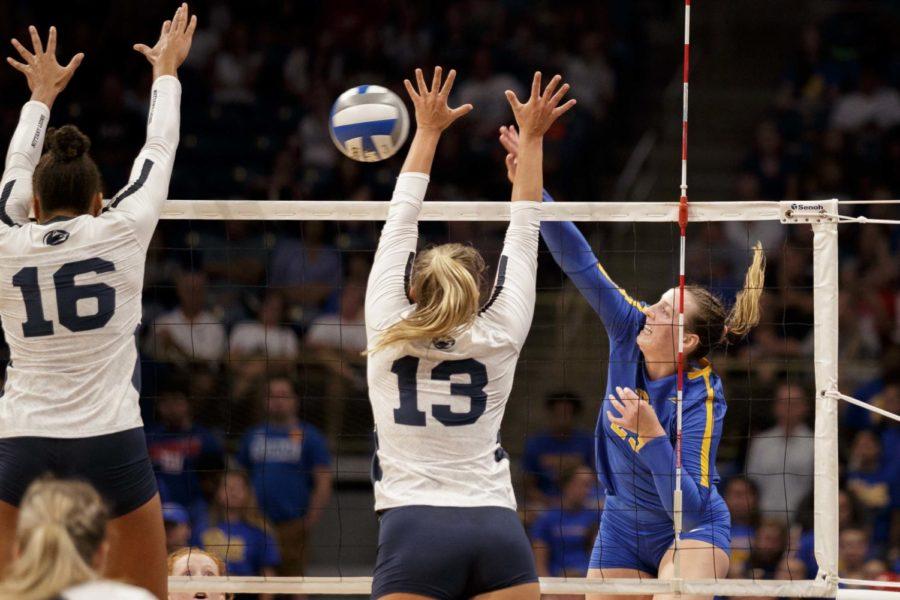 Pitt volleyball has built a reputation as today’s most dominant Panthers team, and their undefeated conference record and No. 2 ranking backs that claim up. But only one thing has proven capable of slowing down the Panthers.

The Petersen Events Center — Pitt volleyball has struggled in their slightly larger temporary home. Over the past two seasons they hold only a 2-2 record in the Pete, a drastic difference from their 56-3 overall record. But head coach Dan Fisher knows those struggles have to be addressed if the Panthers want to meet their own expectations.

These games in the Petersen Events Center are all about preparation for their likely experience hosting the opening rounds of NCAA Tournament games come December.

“We’re planning on having a really good chance of hosting the first two rounds, so we want to make sure this feels like home,” Fisher said.

But the new building remained somewhat uncomfortable. Once again nothing came easy inside the Pete on Friday night, but the Panthers were able to close out three sets and preserve their perfect ACC record with a 3-1 win over Florida State.

Pitt struggled to contain the Seminoles’ blocking prowess when they visited Tallahassee in October, and on Friday night they were again challenged by one of the top blocking teams in the country.

Each set was competitive, but the Panthers showed the moxie commonplace among top-2 teams. Despite their struggles, they closed out sets strong. In the first set, after Florida State tied the game at 13, the Panthers embarked on a 12-6 scoring run to secure a 1-0 advantage. Then in the third set they won the final four points to win 25-19. And then responded to back-to-back errors in the final set with consecutive kills to assure a 3-1 match win.

Fisher didn’t think his team played their best offensive game, but was pleased with their defense and tenacity through the match’s final points.

“Well it didn’t feel easy,” Fisher said postgame. “I don’t feel like any of our hitters had their best game. It’s not like any one of them was in the zone, but we all just stayed tough… I was proud of our defensive effort on the back end and how our hitters stuck with it.”

The heart and soul of this year’s Panthers, junior Kayla Lund, played a massive role in those closing runs. Lund was all over the floor for Pitt. She filled the box score, recording 14 kills, 15 digs, 16 digs and an assist. And according to Fisher, all of her contributions were invaluable.

“[Lund is] such a good all around player,” Fisher said. “Any given night she could lead us in digs or be a great passer, she had a great passing night tonight and got some timely kills.”

Lund’s efforts were aided by junior Chinaza Ndee, who recorded a game-high in kills with 19 and was followed closely by redshirt-senior Stephanie Williams, who added 16 kills.

After a road sweep of NC State on Sunday, Pitt gets a few days’ rest before returning to the Petersen Events Center for a pre-Thanksgiving date with Louisville on Wednesday night. The match is slated to begin at 6p.m.