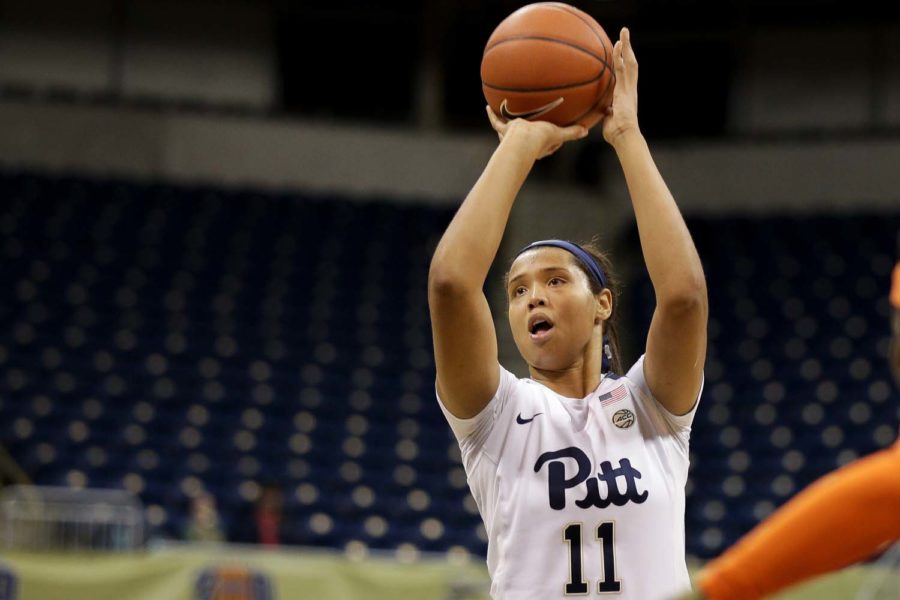 With the Pitt and Duquesne men’s basketball game put on hold this year due to scheduling conflicts, it was up to the women’s teams to keep the City Game tradition alive. They faced off Saturday at the Petersen Events Center, though the contest didn’t resemble much of a rivalry, as Duquesne cracked open an early lead en route to a 81-62 victory over the Panthers.

Duquesne head coach Dan Burt emphasized afterward the importance of the game for the region and women’s basketball in general, saying he was pleased with Pitt head coach Lance White for continuing it.

“A lot of ACC, a lot of Power 5 schools are not reupping rivalries and contracts because they’re going to 20 league games,” Burt said. “So I feel very fortunate and I thank Lance for continuing this series because I do feel like it’s great for our program. I think it is good for their program, they’re very much improving and I think it’s good for girls’ basketball in western Pennsylvania.”

With the loss, Pitt has dropped nine of its last 11 in the City Game. Though White was disappointed with the result, he agreed with Burt that the matchup is important for women’s basketball in the area.

“It’s a great game for us,” he said. “I love being able to celebrate Pitt and Pittsburgh basketball and I think it’s a great thing to be able to have the City Game and have us battle it out … I love games within cities where you can come and really get energized by the fans and this whole community rallying behind women’s basketball. And so for us, I think it really helps us.”

The difference-maker for Duquesne was its bench production and ability to force turnovers. The Dukes scored 24 points off 19 Pitt turnovers, and their bench scored 31 points to Pitt’s four. Duquesne also scored 17 fast-break points to Pitt’s eight, with many coming off turnovers.

Both teams shot poorly in the first three minutes of the game, with Pitt missing six straight shots after first-year Dayshanette Harris made a mid-range jumper and Duquesne going 1-8, only getting a layup from junior guard Amanda Kalin.

Both teams shot more efficiently thereafter, with the Panthers going 5-8 and the Dukes 5-7 in the final five minutes. After a layup at the buzzer by junior guard Libby Bazelak, the Dukes took a slim 20-17 lead entering the second quarter.

Duquesne separated for good in the second quarter, using a 12-4 run over the first five minutes to notch a 32-21 lead. First-year guard Amaya Hamilton led the run with five points on a jumper and 3-pointer.

Pitt played closer from there, with Duquesne eventually taking a 40-28 lead into halftime. The Panthers scored a game-low 11 points in the quarter as their leading scorer, redshirt senior guard Aysia Bugg, didn’t record a point.

In the first half, Pitt shot 13-31 from the field and 1-4 from 3-point range, while Duquesne shot 18-37 from the floor and 4-14 from 3-point range. Hamilton starred for Duquesne with 14 points and Kalin was right behind her with 10 points of her own. Brown led Pitt with 10 points in the first half, marking her third game this season with at least double-digit scoring.

The Dukes then used a 10-0 run in the third quarter to stretch their lead to 20, prompting a timeout from White. Pitt outscored Duquesne 8-3 afterward — but the damage had already been done after a quarter in which the Panthers shot 1-8 from 3-point range.

With the game mostly decided already, Duquesne only widened its lead in the fourth quarter, outscoring the Panthers 19-15 to win 81-62. The Dukes shot 8-15, or 53.3 percent, from the floor, with redshirt senior guard Paige Cannon, first-year center Precious Johnson and redshirt junior guard Nina Aho leading the team with four points each.

Surprisingly, the Panthers were able to out-rebound the Dukes 47-38, as Judkins led the way with 13 rebounds and Green getting into double digits with 10 of her own. Still, the Dukes scored 38 points in the paint to Pitt’s 30.

The biggest disappointment for Pitt came from Bugg, who had been averaging 19.3 points but only scored seven on 3-13 shooting from the field and 1-5 from 3-point range.

Harris stepped into to the primary scoring role for Pitt, leading the team with a career-high 22 points on 9-17 shooting.

“It was a great atmosphere, but 22 points doesn’t matter to me if we didn’t get the win,” Harris said. “We’re gonna grind it out tomorrow and be back for the next game.”

Pitt will try to get back in the win column next Friday, Nov. 29, against the Ohio Bobcats at the Petersen Events Center.