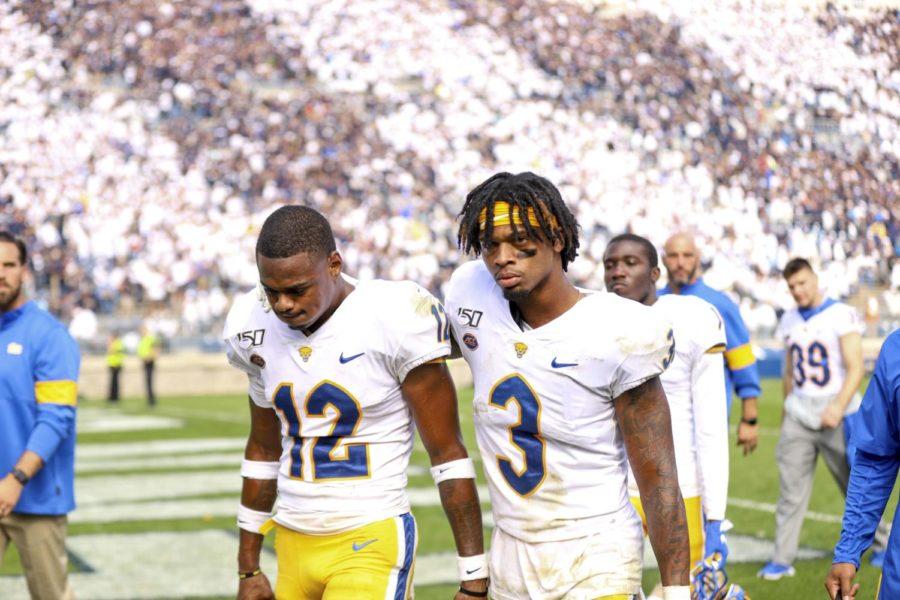 Paris Ford (12) and Damar Hamlin (3), pictured here after Pitt's loss to Penn State in September, led the Panthers with 10 and eight tackles, respectively, against Virginia Tech.

BLACKSBURG, Va. — Heading into Pitt’s Saturday showdown against the Virginia Tech Hokies, there were two different storylines garnering discussion — the final home game of legendary Tech defensive coordinator Bud Foster, and the actual bout between two of the hottest teams in the ACC, with huge Coastal division implications for the victor.

In hindsight, the Foster storyline deserved the spotlight. Pitt (7-4, 4-3 ACC) shrunk from the heavy expectations, handing Foster a perfect going-away gift — a 28-0 home victory in the pouring rain.

Afterward, Pitt head coach Pat Narduzzi voiced his respect for Foster while offering some words of wisdom regarding his team’s performance.

“Bud Foster’s defense came to play, I can guarantee you that. Congratulations to them, and Bud on his retirement,” he said. “But it’s hard to win when you don’t get in the end zone.”

Pitt only gained 177 yards of total offense, easily its worst performance of the season. Pickett completed 10 of 26 passes for a quarterback rating of 71.7, while Virginia Tech sophomore Hooker posted a 226.6 rating. This was Pitt’s first time being shut out since an infamous Sun Bowl loss to Oregon State in 2008.

The buildup for the game was immense, with the winner one huge step closer to an appearance in the ACC championship game. Virginia Tech (8-3, 5-2 ACC) entered as four-point favorites thanks in large part to the emergence of Hooker. With Hooker as the starter, the Hokies are now 7-0.

Tensions before the game reached a boiling point right before kickoff, with players from both teams needing to be separated during a mild scuffle after the teams’ entrances.

Neither squad found much offense in the first quarter. Pitt did an impressive job of stifling Hooker early on, but Pitt junior quarterback Kenny Pickett could not establish a connection with his receivers. He made several bad throws, and his targets also dropped several catchable passes.

With rain coming down heavily throughout the contest, Pickett perhaps deserved a pass for underperforming in the conditions. He, however, did not believe the weather had much to do with his lackluster performance.

“It wasn’t very hard [to grip the ball],” Pickett said. “I was throwing it fine.”

Pitt looked like it had caught the break it needed after some costly consecutive Hokie mistakes. On a third-down pass play, Virginia Tech wide receiver Tre Turner caught the ball near the sticks but went backwards trying to avoid defenders and failed to get the first down. The Hokies then botched the snap on fourth down and Pitt recovered the ball.

But the Panthers, representative of their full performance, failed to capitalize off the turnover. They weren’t even close, losing two yards on the possession before punting right back to the Hokies. 10 minutes into the game, both offenses had combined for 17 total yards over six possessions.

“It’s hard to win when you can’t get in the end zone,” Pitt head coach Pat Narduzzi said. “We had some field position at times and we didn’t do anything with it.”

The Hokies suddenly turned the game over on its head. A chaotic 71-yard catch-and-run by Tayvion Robinson put them on the one-yard line, and sophomore tight end James Mitchell punched it in on an end-around from there.

On the first play of Pitt’s ensuing possession, Pickett coughed the ball up after a sack, and Tech’s Norell Pollard ran the ball back for the easy touchdown. In a span of two plays from scrimmage, the game went from tied to 14-0 Hokies.

Later in the half, Turner beat a Pitt defender one-on-one to catch a touchdown, making up for his earlier mistake and giving the Hokies a 21-0 lead at half.

The Virginia Tech scoop-and-score exemplified one of Pitt’s prominent weaknesses of the game — lack of preparation and discipline. Pitt only had ten players on the field for the play. It can be difficult to stop a tenacious pass rush when you forget to put an eleventh man out there. The Panthers also finished the game with 10 penalties, some of them negating strong Pitt plays.

“I’ve had it with all the penalties,” Narduzzi said. “We’ll focus on it everyday, and we’ll either fix it or let it keep happening. That’s all you can do.”

After a scoreless third quarter, Pitt went into the fourth desperately needing to get points on the board. The Panthers were stopped on a fourth-down attempt from their own 25-yard line, effectively eliminating any chance they had left.

Two Pitt personal fouls — one being a controversial targeting call on a Paris Ford hit, ejecting him from the game — would put the Hokies at the four-yard line. Shortly after, Hooker found redshirt junior receiver Damon Hazelton for a back-shoulder fade in the end zone, putting Tech up four touchdowns.

Ford had racked up 10 tackles and a forced fumble for the Panthers before his ejection.

Narduzzi only had one thing to say about the play.

Because the penalty came in the second half, Ford will have to miss the first half of the regular-season finale next week against Boston College. This is his second targeting ejection of the season, and a third would result in a full suspension for the entire next game.

With an ACC Championship no longer a possibility, Pitt must focus its attention to Senior Day against Boston College next Saturday.

“[The seniors] have given a lot to this program, and it’s their last time playing on Heinz Field,” redshirt junior center Jimmy Morrissey said. “Everything we can do is just play for them now.”