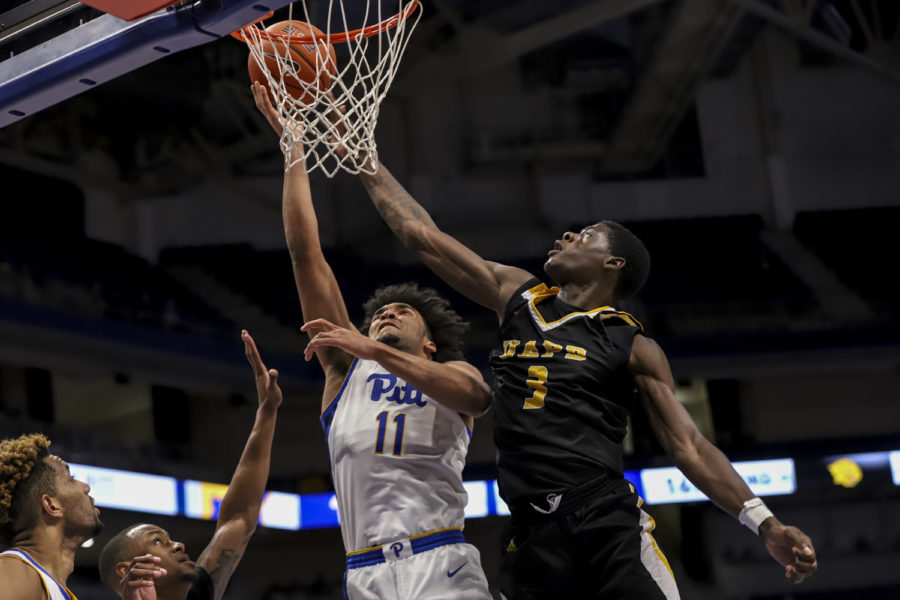 The Panthers were seeing purple all week long when they travelled south to Ft. Myers, Florida for the Fort Myers Tip-Off Tournament this week. Pitt (6-2 overall, 1-0 ACC) sneaked past Kansas State (5-1 overall, 0-0 Big 12) for a 63-59 win on Monday before downing Northwestern (3-3 overall, 0-0 Big 10) in the Championship game on Wednesday.

It seemed like it would be a long week for the Panthers in Sunshine State. They were blitzed by the Wildcats from Manhattan to open the tournament. Kansas State jumped out to a 9-0 lead before Pitt could record its first field goal — a pull-up jumper from junior guard Ryan Murphy — more than four minutes into the game.

But Murphy’s score did little to still the bleeding. Kansas State kept Pitt at arm’s length for much of the first half, even extending their lead to double digits with just under four minutes remaining in the half. Then the Panthers picked up steam. First-year forward Justin Champagnie and sophomore guard Trey McGowens scored seven points during an 11-3 closing run to cut the deficit to four at halftime.

Pitt shot abysmally in the opening period at a 40% rate overall and 8% from 3-point range, but kept pace thanks to a 78% clip from the charity stripe.

The second half was another back-and-forth affair, with neither team gaining more than a one possession advantage until junior forward Terrell Brown made a free throw to put Pitt up four with 4:33 remaining.

Graduate transfer forward Eric Hamilton would make a pair of free throws on the ensuing possession that extended the Panther lead to six, but that would be the last points Pitt scored for almost four minutes.

The Wildcats clawed to a one point lead, but sophomore guard Xavier Johnson laid the ball in for two points with 11 seconds remaining to reclaim a one point lead, then he and Champagnie would make all four of their free throws down the stretch to secure a win.

Johnson caught fire in the second half, scoring all 12 of his points on 5-7 shooting in the closing period. He was joined in double figure scoring by Murphy, Champagnie and Hamilton, who also added 12 rebounds.

And the Panthers moved on, Wednesday taking on Northwestern in a Championship game, which while small, is not insignificant for a team whose head coach has been vocal about their struggles with confidence.

The first half of Wednesday’s game against a new squad of Wildcats seemed like more of the same. The Panthers stalled out of the gates, going 1-9 from the floor through the Championship game’s first four minutes.

Those shooting woes persisted through the remainder of the first half, but Pitt muscled their way to a two point lead at intermission. They scored 22 points in the paint and collected a half dozen offensive rebounds that covered for their 0-11 mark from distance.

Towards the close of the period, with Pitt trailing by two, Johnson and McGowens scored back-to-back layups in the final 37 seconds to gift the Panthers their halftime lead.

And following the short scheduled break, the script flipped.

Pitt’s stars got hot and after making three of their first four shots following halftime, the Panthers led by eight with less than two minutes having passed.

Their hot shooting wouldn’t stop there. Consecutive Champagnie 3-pointers stretched the lead to 13 at the 5:38 mark and Pitt would not look back. Northwestern would get as close as six, but Pitt outscored the other cats 12-4 over the final 2:30 of the game to secure the Fort Myers Tip-Off Tournament Championship.

The Panthers shot 50% on 3-point field goals and owned a 21-10 rebounding edge over the final 20 minutes to cover their ugly first half.

Champagnie was named MVP of the tournament after averaging 17 points and six rebounds per game during his week in Florida.

Now Pitt heads home and turns their attention to the ACC/Big 10 challenge. The Panthers welcome Rutgers next Tuesday for a 9p.m. tip-off from the Petersen Events Center.