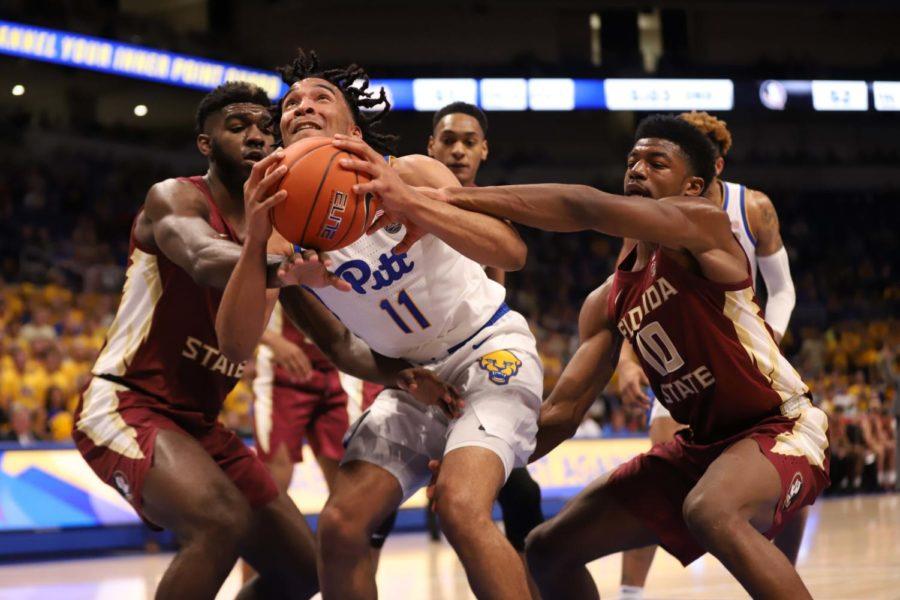 First-year forward Justin Champagnie (11) leads the Panthers in points and rebounds per game.

Just a few weeks prior to the Pitt basketball season, it wasn’t certain that first-year forward Justin Champagnie would play a single minute in 2019-20.

After suffering a knee injury in the offseason, Champagnie was seen wearing a bulky brace shortly after, causing concern that he could miss significant time. Head coach Jeff Capel said in September that the injury “could be” season-ending.

But his diagnosis shifted from a potentially torn ACL to a sprained knee, and he was cleared to play for Pitt’s season opener against Florida State. Since that time, Champagnie has done more than just contribute — he has perhaps become the Panthers’ best player.

And despite the seemingly small eight-game sample size, Champagnie’s early success is not to be taken lightly.

At this point last season, then-first-year players Xavier Johnson and Au’Diese Toney led Pitt in scoring and rebounding, respectively. When the season ended, they had only further established themselves as the team’s leaders in these aspects of the game.

After his 21-point, six-rebound performance against Northwestern on Wednesday, Champagnie now leads the Panthers in both categories with per-game averages of 12.3 points and 5.8 rebounds. Whether he can hold these statistical leads remains to be seen, but what’s certain is that he will continue to be a leading force for the Panthers.

Most people did not predict that Champagnie would make such a sizeable impact this early in his Pitt career. He joined the Panthers this summer after reclassifying to the class of 2019, and was the lowest-ranked recruit in Pitt’s 2019 class by 247Sports. His preseason knee injury didn’t help his outlook.

Rebounding and general lack of size were Pitt’s biggest flaws last season. Although Champagnie stands just 6-foot-6 — relatively short for an ACC forward — his instincts on the glass and his remarkable athleticism have made him a formidable force in the paint. His skill set has also translated to the defensive end, as Champagnie constantly excels at protecting the rim and defending the post.

Though he starts at the power forward position and spends much of his time down low, Champagnie has proved to be extremely versatile. In the Florida State game, he knocked down two absolutely pivotal 3-pointers from the corner to propel the Panthers to victory.

Champagnie has struggled shooting the basketball since that game, making just 18.5% of his shots from deep on the season. But his clean form and 84% free-throw rate indicate that his shooting numbers should come up over time. In the meantime, Champagnie has scored by making savvy cuts to the rim for alley-oop dunks and easy finishes inside. He can score the basketball in many different ways as well as defend and play multiple positions, making him sort of a Swiss Army knife for the Panthers.

Energy finds the ball. Justin Champagnie is constantly moving/working to find open space around the basket. Spring in his legs definitely returning, really good hands, great sense of where he is in relation to basket, and strong finisher. Plays with some nasty. pic.twitter.com/ihnvry0lmB

Champagnie hails from Brooklyn, New York — the birthplace of former Pitt greats like Levance Fields and Travon Woodall. Jeff Capel has repeatedly expressed a desire to recruit heavily from the state of New York, and it’s easy to see why. There’s a heightened level of toughness, grit and passion associated with the area, and Champagnie has exemplified that so far. He has displayed the energy and fortitude that the Panthers need to take them to the next level as a team.

Star sophomores Trey McGowens and Johnson headline Pitt’s lineup, but it’s quite possible that Champagnie will finish the season as Pitt’s most valuable player. Johnson and McGowens possess greater talent, but this has allowed opposing teams to focus their game plans on stopping them.

With teams playing aggressive defense on the two guards and crashing in on drives, it is essential for Pitt to have a player who can spot up in the corner, make cuts on the baseline and serve as an overall scoring threat on a potential kick-out pass. Champagnie has displayed an elite ability to do all of these things, allowing not only himself to make an impact, but also open up the floor for Pitt’s primary ball handlers.

The Panthers won first place in the Fort Myers Tip-Off tournament last week, with Champagnie earning MVP honors. This accolade epitomizes the overall impact he has had in all eight of Pitt’s contests thus far. And though it’s likely that either Johnson or McGowens will overtake the scoring lead — while graduate center Eric Hamilton has recently looked like a rebounding machine — Champagnie remains Pitt’s primary X factor. He may be a newcomer, but he’s already proving to be a star for this Panther team.