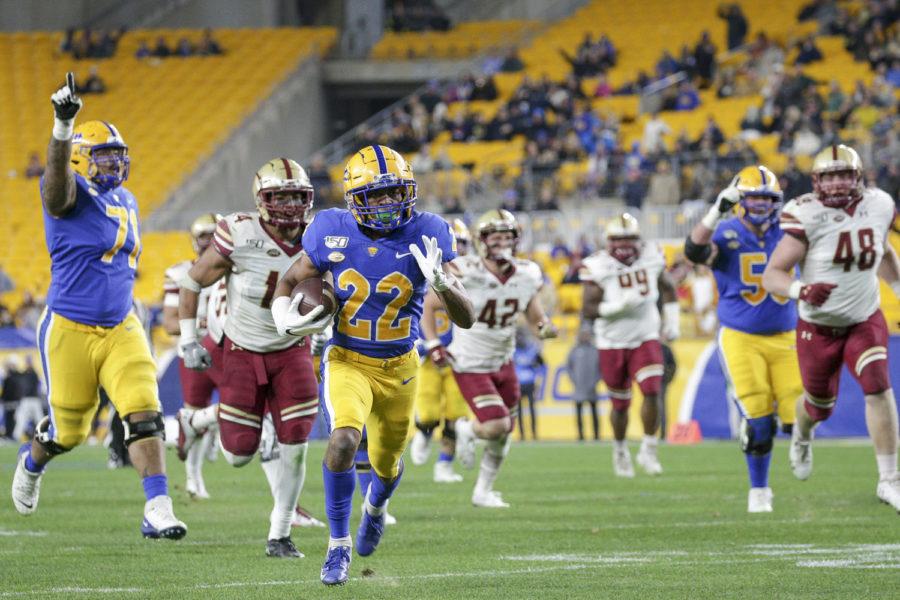 Coach Narduzzi’s Panthers have yet to win a postseason bowl game.

A mere three weeks ago, it looked like Pitt football had a puncher’s chance at playing in the Orange Bowl. Never before had the Panthers played in a prestigious New Year’s Six bowl game, but you’d be forgiven for pre-ordering your plane ticket to Miami.

Only a couple things needed to happen. The Panthers, sitting pretty with a slick 7-3 overall and 4-2 ACC record, winners of six of their previous seven and fresh off a purifying overtime win over longtime Achilles’ heel UNC, simply needed to win their last two games against Virginia Tech and Boston College.

The Panthers obliterated the Hokies in 2018 and the two had identical overall and ACC records entering this year’s matchup, so it looked like Pitt had roughly 50-50 odds at beating them. And with Pitt boasting the nation’s sixth-best run defense, beating the run-dominant Eagles of Boston College in the season finale seemed like an afterthought.

Assuming the Panthers won out, all they needed in addition was for Virginia Tech to beat Virginia — not a crazy proposition when you take into account that the Hokies had beaten their in-state “rival” 15 consecutive times dating back to 2004. A major bowl was finally within Pitt’s grasp if all went according to plan.

[narrator voice]: All did not go according to plan.

In fact, everything went completely against the plan. By this time, you know the story — Pitt was shut out and embarrassed at Blacksburg, then proceeded to fumble the game away against Boston College on Senior Day. Virginia, meanwhile, beat Virginia Tech to claim the ACC Coastal division and an Orange Bowl appearance.

By finishing the season in such catastrophic fashion, Pitt played itself out of contention for a number of upper-echelon postseason designations, including the Orange Bowl and Camping World Bowl.

Well, this isn’t exactly fresh territory for Pitt football. Since joining the ACC in 2013, the Panthers have finished every season with between six and eight overall wins except for 2017. That has qualified them for the same specific set of bowl games which, with another middling record this year, they’ll once again occupy. Pitt will find out its bowl designation for certain on Dec. 8.

There is often no rhyme or reason to the selection process of college bowl matchups. Each conference has a designation to play in certain bowls, but there’s no set structure after the top teams that guarantees bowl placement based on record or conference standing. The ACC instead has a “tier” system that recognizes two levels of bowl games, and the committee often fills those matchups based on whose fans they think will travel best to the game’s location.

With that being said, there are three bowl games that most likely await Pitt — the Military Bowl, Pinstripe Bowl or Belk Bowl.

Of these three, the Pinstripe Bowl and Belk Bowl are considered “tier one” bowls by the ACC, which implies equal selection status. But the Belk Bowl is unofficially the more distinguished of the two, and would be Pitt’s best bet.

Held in Charlotte, the Belk Bowl pits an upper-tier ACC team against an SEC opponent of relatively equal talent. Virginia Tech makes the most sense to fill this spot, but if selected then Pitt would likely face 6-6 Mississippi State or 7-5 Kentucky. If the SEC is unable to send a team, likely Group of Five replacements include Southern Mississippi, Appalachian State or Florida Atlantic.

The Pinstripe Bowl, held at Yankee Stadium in New York City, is perhaps Pitt’s most probable destination. This game pits the ACC against the Big Ten, with 6-6 Illinois and 6-6 Michigan State the most likely candidates to represent the opposing conference. If the Panthers were selected and matched up against MSU, it would at least present the noteworthy narrative of head coach Pat Narduzzi facing his former team.

The Military Bowl in Annapolis would technically be the least honorable destination for the Panthers, as it is considered a mere “additional bowl” by the ACC. If selected, Pitt would almost certainly face Navy, who most pundits peg to represent the AAC. Though considered a second-tier matchup, this would actually present Pitt with its highest quality of opponent, considering the 9-2 Midshipmen are ranked No. 23 nationally.

Regardless of what game Pitt finds itself in, the team can at least rectify its shortcomings by giving Narduzzi his first bowl win as head coach since taking over in 2015. It would be a nice feel-good story to end the season. But if the Panthers have taught fans anything, it’s never to get their hopes up.