Center for Creativity gets students out of their artistic comfort zones 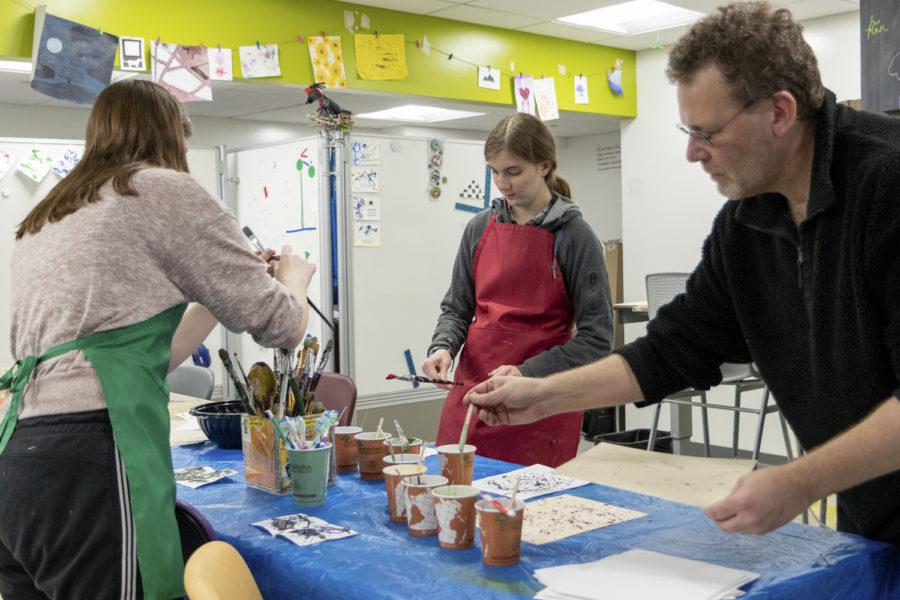 Erik Schuckers, the program manager at the Center for Creativity, carefully swirled a paint-dipped string onto a white piece of paper in front of a group of mesmerized students Monday afternoon.

The Center for Creativity isn’t just for when students have time to wander into the basement of the University Store on Fifth — it also holds programs throughout the year to encourage students to try new approaches to getting creative, such as Splatter, Blot & Blow: Painting Without Brushes, which took place Monday. Toward the end of the semester, they add even more programming, often in conjunction with other organizations on campus, to help students destress.

As finals week approaches, the C4C is making appearances at several stress relief-oriented events, including the Kick Back at Katz event on Tuesday and the Yoga Paint Party, cohosted by the Stress Free Zone in the William Pitt Union, on Friday. In the middle of finals week, the C4C will hold an event called Bound & Unbound — a celebration of the other workshops of the same name that occurred throughout this past semester where participants made their own journals and fill them with work such as blackout poetry.

Schuckers said the Center for Creativity events approaching finals week offer opportunities for members of the Pitt community to relax and let themselves go, like the Process Pouring workshop on Thursday, where students can create a style of painting involving pouring acrylic paint over a surface such as wood or a canvas.

“We knew a lot of students and other people, staff and faculty as well, might need to have an hour where they can just sort of try making something new without a lot of consequences for getting something wrong,” Schuckers said.

The C4C was established as part of the 2015-16 Year of the Humanities at Pitt. It’s filled with supplies, from paint to a pottery wheel to musical instruments, for Pitt students to sit down and flex their creative muscles. Schuckers said the C4C has many programs throughout the year, usually about once a week, but there may be more or less, depending on the time of year.

“In October, for instance, we might have more than that because that tends to be a really popular time when people want to do things,” he said. “November is a little bit tougher because of the break, so we try to average at least one a week.”

During these programs, students can use many of the supplies available in the Center, such as old brushes, instruments or typewriters, and many of the programs focus on using these supplies in unique ways.

“We try as much as possible to use as much of the space as we can and also to do different forms of making, so we don’t just do writing programs or visual art programs or music,” Schuckers said. “We try to combine as much as we can into interdisciplinary programming or get a mix of programming.”

Programs held by the Center for Creativity over the past semester include Mixed Media (Card) Making, where attendees could make custom notecard designs out of fabric, beads and paper, Ring It On!, an introduction to the art of handbell playing, and Beatbox 101, where Pitches and Tones — an a cappella group here at Pitt — taught attendees the basics of vocalizing.

Grace Campbell, a junior anthropology and English literature major, who frequently attends programs at the Center, said she enjoys being introduced to new mediums through the programs.

“What I like about the Center for Creativity is that there’s multiple kinds of programs that I never would have thought about going [to]. Something like this with painting, I went to one for 3-D printing. I think the fun of it is you never necessarily know what program it’s gonna be, but you get to discover a new art form along the way,” she said.

Splatter, Blot & Blow was the second program at the C4C that Manon VanOverberg, a junior environmental science major, has attended. VanOverberg also said she enjoyed being able to branch out and try new ways of being creative.

According to Schuckers, when it comes to choosing programs, the staff at the Center for Creativity draw on their own experiences and suggestions from members of the community.

“We take suggestions [for programs] from workshop users, so we always are interested in hearing from the community what sorts of things they’re interested in doing,” Schuckers said. “Plus the staff who works here … have things that we either are experienced in and like to do, or ways of making that we want to explore.”