Pitt breaks in new threads with 71-60 win over Rutgers 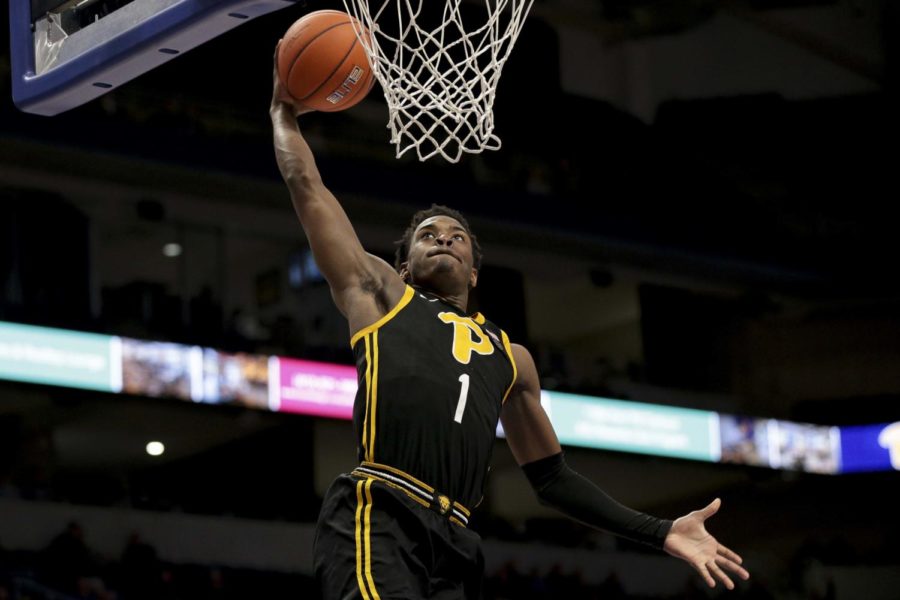 Sophomore guard Xavier Johnson (1) goes up for a dunk during Pitt’s 71-60 victory over Rutgers.

The Pitt men’s basketball team certainly looked good Tuesday night in its stylish new black and yellow jerseys that paid homage to the hometown color scheme, capped by a bright yellow capital “P” for Pittsburgh on the chest.

And the Panthers put forth a performance to match the appearance, taking down Rutgers 71-60 at the Petersen Events Center as part of the ACC-Big Ten Challenge.

Like most young people, sophomore guard Xavier Johnson and his teammates loved their new threads.

In those unfamiliar home colors, Pitt (7-2 overall, 1-0 ACC) played its most complete game of the season in a comfortable win over the Scarlet Knights (6-2 overall, 0-0 Big Ten). Tuesday marked the Panthers’ fourth win over a major-conference opponent this season, already matching their total from a season ago.

The Panthers hadn’t played a home game in 12 days. They were fresh from Florida after winning the Fort Myers Tip-Off Tournament and fed off of the energy of an invigorated home crowd.

Junior guard Ryan Murphy drew confetti from the Oakland Zoo with a 3-pointer — the first of five field goals he would sink in the opening frame. He scored 11 points in the first half after struggling to find his range in Fort Myers.

“It’s important for every guy on the team,” Capel said. “We have not shot the ball very well, so if we can see the ball go through the hoop that’s important, I don’t care who it is.”

But Murphy didn’t single-handedly kickstart the sluggish Panther offense. The Panthers assisted on eight of 14 field goals that were made, a facet of the game that Capel has made a point of emphasis.

“We made some shots,” Capel said. “But something we’ve consciously tried to make an effort to do a better job with is move the basketball to get movement and try to get guys to play without the ball.”

The Panthers left the floor at halftime up only eight, but in control. They were forcing the Scarlet Knights into long 2-pointers and owned a 20-12 advantage in points in the paint. Still, Pitt couldn’t afford to relax. Capel expected Rutgers to play angry following the intermission, and that it did.

Rutgers sprinted to a 10-2 run to open the second half, forcing Capel to call a timeout with 15:23 remaining to settle his team down. Rutgers had reclaimed the momentum, but Capel urged his squad to return to what had earned the lead — defense and rebounding.

Following the timeout, Pitt responded with a 13-0 run fueled by steals and layups, and punctuated by a beautiful crossover from Johnson and a feed to Murphy on the wing for an open 3-pointer.

The Panthers never looked back, stretching their lead to as many as 13 and cruising to a double-digit victory.

Johnson continued to play like the all-around point guard his first year promised. On Tuesday he scored 20 points on 8-14 shooting from the field, including a pair of 3-pointers. He was joined in double-figure scoring by Murphy, sophomore guard Trey McGowens, and sophomore forward Au’Diese Toney, who scored 16, 15 and 10 respectively.

Toney also added three assists and two rebounds, all essential to helping Pitt start as sharp as it did. Much of his strong defense and stabilizing offensive play is invisible in the box score, but Toney’s contributions didn’t go unnoticed.

“[Toney] was big, especially starting off at the beginning of the game,” McGowens said. “He was getting boards and assists … When he’s rolling, that helps us a lot.”

Toney, Johnson and company will look to keep their five-game win streak alive, but face a massive hurdle on Friday.

The Panthers can now look forward to a trip to the Bluegrass State and a date with undefeated No. 1 Louisville. Tip-off with the Cardinals is scheduled for 9 p.m. and Pitt’s attempt at a repeat of last year’s upset at the Pete will be broadcast on the ACC Network.