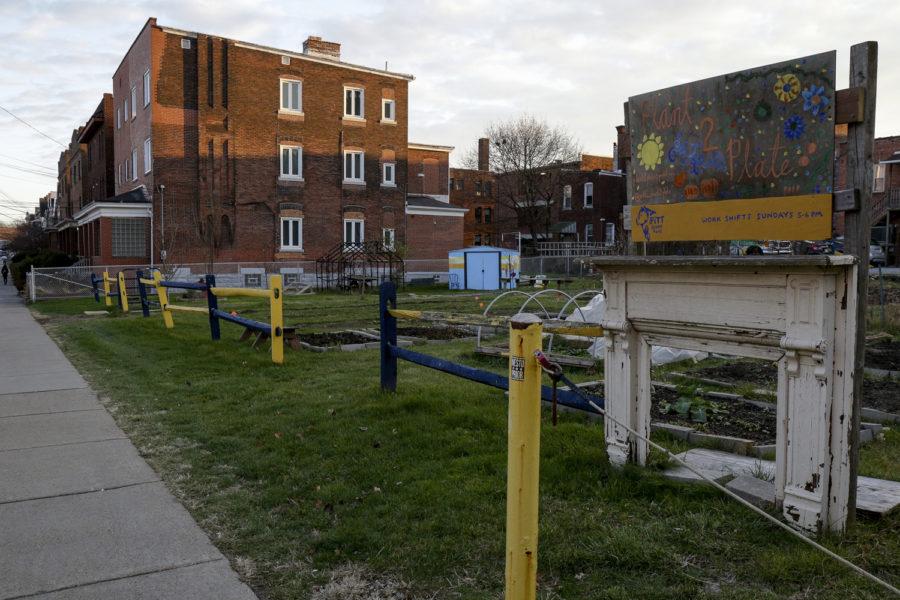 The lot housing the Plant to Plate community garden is currently planned for potential demolishment along with other buildings and residences on Oakland Avenue as a part of the current Campus Master Plan.

About 30 members of the Oakland community gathered in Lawrence Hall Thursday evening to hear updates regarding the Institutional Master Plan — which includes the plans for new construction and remodeling of University buildings — and how the University has responded to community feedback.

This was the second community meeting regarding the IMP and project leaders discussed revisions to the plans for campus improvement projects that will be implemented over the next 10 to 25 years.

Regarding a concern for the guarantee of open green space in the IMP, Ron Leibow, senior manager of planning and design for the University, said the University is committed to incorporating open space.

“We plan on tightening up the language to make sure it’s known that there is a commitment to open space as part of these development site [renewals] and designs,” Leibow said.

Revisions incorporating the feedback also included the height reduction of many newly proposed buildings, including the resizing of One Bigelow from 170 feet to 130 feet, as to not overpower the architecture of Soldiers and Sailors Memorial Hall.

Community members “voiced a strong opposition to the increased building height,” as well as inconsistencies regarding the IMP’s digital rendering of the project during an earlier community meeting in late October.

The revisions made to a newly planned residence hall on Oakland Avenue — behind Sennott Square and across from Bouquet Gardens — appeased community members that gave feedback on how they believed the proposed size and proximity to the residential area of Oakland would take away from the consistency of the neighborhood buildings.

Mary Beth McGrew, associate vice chancellor of planning, design and real estate for the University, detailed the changes to the plan for the Oakland Avenue building.

“[The Oakland Avenue site] at 170 feet was a little bit stand-offish to most, so in that context it went from 170 to at its highest point to 110 feet at its highest,” McGrew said.

In reference to neighboring Sennott Square — which stands at 111 feet — the new residence hall will be approximately 11 stories, compared to Sennott Square’s six stories.

The IMP looks to add a projected 1,000 new beds for those who wish to live on campus through redeveloping existing residence halls and the building of the proposed Oakland Avenue residence hall as well as another residence hall on upper campus.

Students representing the community food garden Plant2Plate brought up their concerns of the potential removal of their urban garden site on Oakland Avenue to make room for the new residence hall.

Leibow addressed this concern directly, noting that the University acknowledged the concern from the online feedback it had received regarding the subject.

A Plant2Plate representative emphasized the garden as an important resource to not only Pitt sustainability efforts, but also as a vital resource for those facing food insecurity at Pitt and in the community.

Further into the meeting, both students and community members raised concerns regarding the high price of many student and community necessities such as affordable housing.

Andrea Boykowycz, a resident of Central Oakland and an employee for Oakland Planning and Development Corporation, expressed concern for students who endure financial instability from the high cost of living and going to Pitt. In an August report, student loan refinancing company LendEDU said that borrowers in Pitt’s class of 2018 graduated with an average of about $40,000 in unpaid student loans.

“I’m sure you must be sensitive to the fact that [Pitt] ranks as one of the top universities nationwide in the amount of debt with which students graduate,” Boykowycz said.

Community members speculated that the residential additions to the University will also be too expensive for students who are already struggling financially to be willing to endure “less than ideal” living situations off campus. Boykowycz and other members of the community said they are aware of the off-campus problems students face, including rat infestations and filthy sidewalks.

While there was much concern for student livability, the discussion also focused on Oakland livability as a whole. Many community members expressed grievances concerning the slow but steady expansion of the University into the historic and residential areas of the Oakland neighborhood, such as areas of Schenley Park.

Boykowycz expressed her disapproval with this expansion, warning that the historic and family-friendly community of Oakland is getting demolished and rebuilt without a second thought.

“What was demolished were single-family homes, like every other block in Oakland where Pitt has buildings,” Boykowycz said.

The meeting came to a conclusion with more ideas from the community on how Pitt can give back and preserve history and a positive family community in the Oakland neighborhood. Ideas ranged from bringing in an affordable grocery store, to creating better childcare services, to assisting in completely rebuilding homes in the neighborhood.

“I have an unrealistic dream,” Boykowycz said, “that Pitt would replace, one for one, every house that it has demolished in Oakland.”

McGrew responded to this with no specific plans, but said Pitt may approach this issue in the future.

“I don’t think it’s unrealistic to begin a plan to look at what we can do to one,  encourage people to live here who are moving here or would like to be closer to work,” McGrew said. “And two, [look at] what can we do in partnership with OPDC to begin to look at what makes the neighborhood better and to begin to populate these streets with occupied housing.”