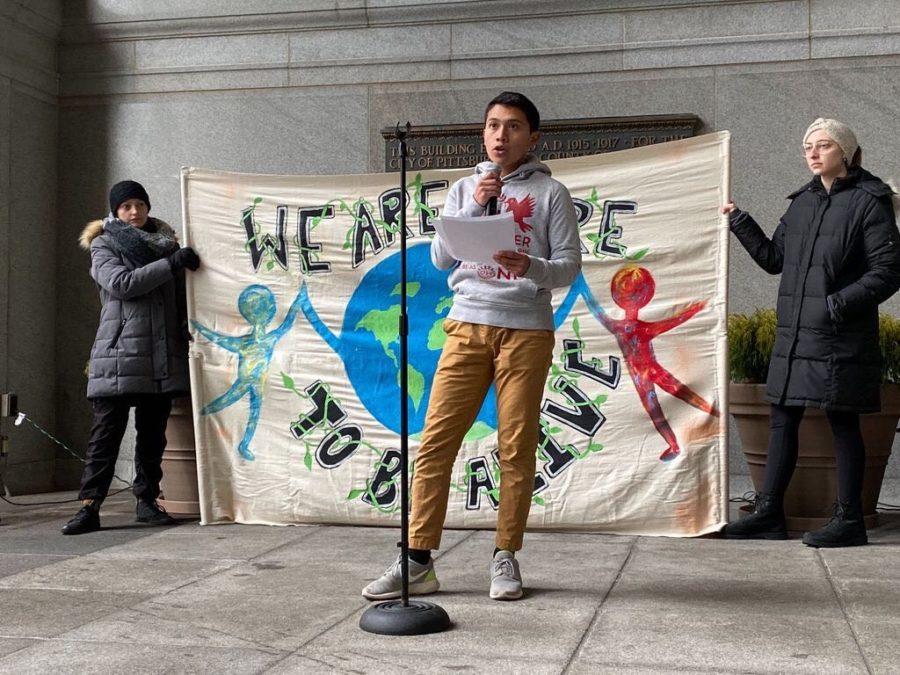 While Friday’s climate strike Downtown drew a considerably lower turnout than the last one in September — which brought out hundreds of protesters in Pittsburgh and millions worldwide — there were still more than 100 gathered in front of the City-County Building in the early afternoon to demand political action only climate change.

The group included politicians and organizers with established activist groups like Socialist Alternative Pittsburgh. But more than half of the speakers were high schoolers like Benjamin Gutschow, a junior at Winchester Thurston High School, who said protesters need to “rise on every level” and demand more from the government, emphasizing a need for new scientific regulations on climate issues.

“Our scientific regulations here in Pennsylvania are from 1996, and that is older than every student in high school,” Gutschow said.

Teenagers like Gutschow have been the driving force behind the climate strike movement, beginning with Greta Thunberg, whose now-famous decision to start striking outside the government building in her home country of Sweden sparked similar movements across the country. Thunberg’s Pittsburgh equivalent is Leandra Mira, the 18-year-old Upper St. Clair native who has staged weekly sit-ins outside the City-County building since May.

Mira organized and emceed the Friday protest, introducing speakers including Pitt Law professor and would-be Congressman Jerry Dickinson, who announced his primary challenge against longtime U.S. Rep. Mike Doyle, D-Pittsburgh, in April. Because Doyle’s District 18 seat is a safe Democratic seat, Dickinson said, the representative from the district has a responsibility to be a leader on issues like climate change.

“When I’m elected to Congress, I’m going to be on the House floor in Washington, D.C., with all the sponsors and co-sponsors of the Green New Deal,” Dickinson said. “The difference with me, when I’m down there, is that I’m going to be representing a post-industrial Rust Belt liberal enclave.”

Fridays for Future Pittsburgh — Mira’s group, which strikes weekly on the steps of the City-County Building — set up a table at the event encouraging protesters to make a card for their representative urging action on climate change.

“Happy Holidays Rep. Mike Doyle!” one sample letter on the table, written by a Pittsburgh 11th-grader, read. “All I want for Christmas is Climate Action. Me and my Pittsburgh friends wish for a ban on all fossil fuel infrastructure in PA.”

Bethany Hallam, an at-large member-elect of the Allegheny County Council, told the crowd that action — like Friday’s strike — was necessary in order to fight against fossil fuel executives on climate change.

“[Those executives] are investing in destruction and buying politicians who facilitate and support and subsidize that destruction with our taxpayer dollars,” Hallam said.

Hallam made her environmental goals a focus of her succesful primary campaign against County Council President John DeFazio, who she defeated by more than 7,000 votes in May. At the strike, she referenced the “infamous” new Shell Chemical ethane cracker plant in Beaver County, which met pushback from local environmental activists at every step of its development. The plant was projected to create 6,000 temporary jobs during its construction and 600 permanent jobs when open.

“When operational, [the plant] can emit as much CO2 as half a million cars,” Hallam said. “Will it employ half a million people? No. Will it improve the quality of life at all for anyone in our area? No. Not one bit.”

As in September, Pittsburgh’s strike was part of a global protest in cities across the United States and the world. Thousands of protesters joined Thunberg in a march in Madrid, the location of a United Nations climate conference where Thunberg spoke earlier that day.

Despite the attention the climate strikes have garnered from politicians, the media and the public, Thunberg said at the conference, not enough “concrete action” has taken place.

“Of course there is no victory, because the only thing we want to see is real action,” Thunberg said. “So we have achieved a lot, but if you look at it from a certain point of view we have achieved nothing.”

Sen. Bernie Sanders, I-Vt., whose policy proposal to address climate change is more expansive — and expensive — than any other 2020 presidential candidate’s — joined a group of protesters outside the state capitol building in Des Moines, Iowa, while his fellow progressive Sen. Elizabeth Warren, D-Mass., affirmed her support for the strikers on Twitter. Later in the day, the Sanders campaign announced it had been endorsed by four teenage leaders of the U.S. Youth Climate Strike.

I'm proud to stand with young people in Iowa and around the world today in their climate strikes. This is about the future of the planet and we won't accept a middle ground approach. We need a Green New Deal. https://t.co/BsX9K7NHx2

Natalka Harris, a junior at Fox Chapel High School, said the threat of climate change can be overwhelming and exhausting, but that it’s possible, and necessary, to push through and make a difference.

“A lot of folks shut down when they become aware of the extent of the climate crisis. ‘It’s too much, what are we going to do?’” Harris said, adding that she sometimes felt that temptation herself. “Obviously, since you all are here today, you didn’t shut down. You didn’t shy away from the seemingly insurmountable problem of climate change. You figured out how it started. You found a way to keep going.”