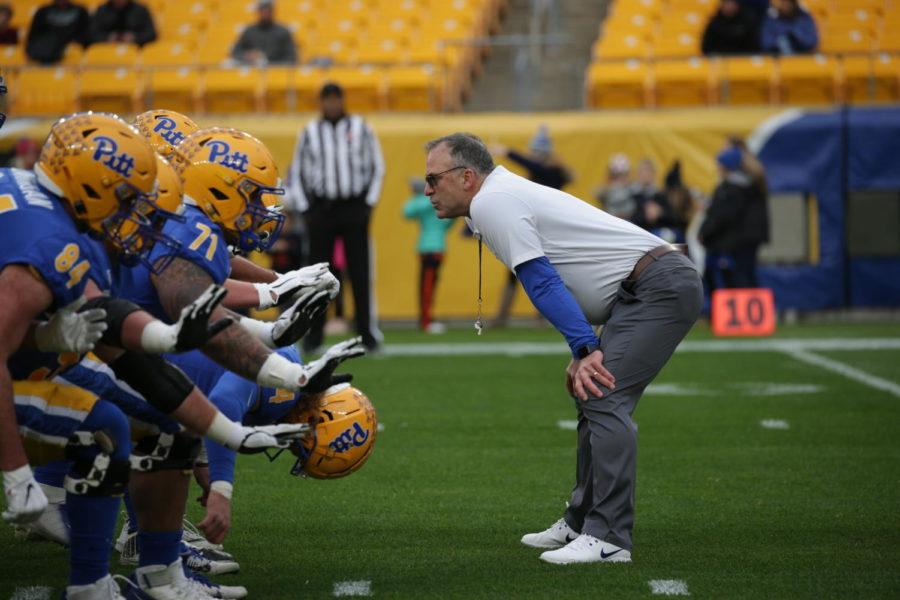 The Panthers accepted an invitation to play in the Quick Lane Bowl in Detroit against Mid-American Conference opponent Eastern Michigan on Dec. 26.

After weeks of speculation and projections that became increasingly bleak after two Panther losses to end the regular season, Pitt football found out its postseason designation on Sunday afternoon.

And for a team that was once in contention for an upper-tier bowl not so long ago, the verdict couldn’t have been much worse — the Panthers accepted an invitation to the Quick Lane Bowl in Detroit against Mid-American Conference opponent Eastern Michigan on Dec. 26.

The announcement comes as a disappointment for a team that was once 5-2 with a gutsy win over No. 15 UCF. Specifically, there are several factors that make this bowl game particularly unappealing.

It starts with the fact that Detroit — bless its heart — isn’t exactly at the top of anyone’s vacation list. Though the city isn’t nearly as bad as it’s made out to be, it’s still not a tropical getaway or even New York City during Christmastime, which is where Pitt would’ve spent its holiday season if selected to the Pinstripe Bowl as many pundits predicted.

Pitt and its most devout fans will have to make the roughly four-and-a-half hour trek from campus to Ford Field. Eastern Michigan, meanwhile, will essentially be playing a home game — its facilities in nearby Ypsilanti are just 40 minutes from Ford Field. The stands will be striped with green and white in support of the hometown Eagles.

The ACC sent 10 teams to bowl games. According to the conference hierarchy of bowl-game affiliations, the Quick Lane Bowl was the ninth-best destination. Only the Birmingham Bowl is considered less honorable. And ironically, the Birmingham Bowl will pit Boston College against one of the best opponents in an ACC bowl game, No. 21 Cincinnati.

After falling to Boston College in the season finale, Pitt (7-5 overall, 4-4 ACC) still had a reasonable claim to one of the four “Tier One” bowls recognized by the ACC, most likely the Pinstripe Bowl. The Panthers were understandably passed by in favor of 8-4 Wake Forest.

Of the mere “additional bowls” recognized by the conference, the Military Bowl in Annapolis was Pitt’s next best bet. But the Panthers were again passed over, this time in favor of 6-6 North Carolina — a team who Pitt had the head-to-head and record advantage over.

But it’s hard to blame the powers that be for using whatever possible leeway to prioritize a Tar Heels team that averages 10 more points per game than Pitt and is led by one of the nation’s most promising young quarterbacks in Sam Howell. Sure, the Panthers have the 11th-best defense in college football, but defense wins championships — not TV ratings.

And as a team that struggles to fill its own seats at Heinz Field, Pitt put itself in a vulnerable position which, in the eyes of bowl officials, required the opponent to supply the majority of attendance.

In sending the Panthers to the Quick Lane Bowl in a true road game against a middling MAC team, the selection committee sent a clear, two-part message to Pitt football — your fans don’t travel well and your brand of football is unappealing.

Now, some might argue that the Panthers got a raw deal. But a raw deal implies a party that has earned a right to something which is then not given due to forces out of its control. This doesn’t apply to the 2019 Pitt football team, which had ample opportunity to control its own destiny and simply failed to take advantage.

Had the Panthers taken care of business as a nine-point favorite at home against Boston College, they’d have earned an automatic bid to a Tier One bowl on account of their 8-4 record.

Or had the Panthers’ offense averaged more than 20.1 points per game — 115th nationally out of 130 Division I teams — bowl officials may have been more inclined to put them on a bigger stage.

Instead, Pitt will face an Eastern Michigan opponent (6-6 overall, 3-5 MAC) coached by Chris Creighton that wasn’t even competitive within its non-Power Five conference, finishing fifth out of six teams in the MAC West.

The only storyline of note is that Pitt Athletic Director Heather Lyke occupied the same role at Eastern Michigan from 2013-17, making this a “Lyke Bowl” of sorts.

“On behalf of the University of Pittsburgh, I want to thank Executive Director Brad Michaels and the Detroit Lions organization for the opportunity to play in this year’s Quick Lane Bowl,” Lyke said in a press release. “We look forward to our visit and hope our fans make the trip to Detroit on the 26th to support our Panthers in their final game of the season.”

The relative lack of opposing talent will at least present a prime opportunity for head coach Pat Narduzzi to capture his first bowl victory since taking over Pitt in 2015, a period in which the Panthers have gone 0-3 in postseason games.

“You’re only guaranteed 12 games in college football, so the opportunity to play one more time in 2019 is something our team is not going to take for granted,” Narduzzi said. “They had a great road win over a Big Ten bowl team in Illinois this season. We look forward to the challenge.”

Kickoff is set for 8 p.m. and the game will be broadcast on ESPN.