Satire | 12 thoughts while writing an essay during finals week 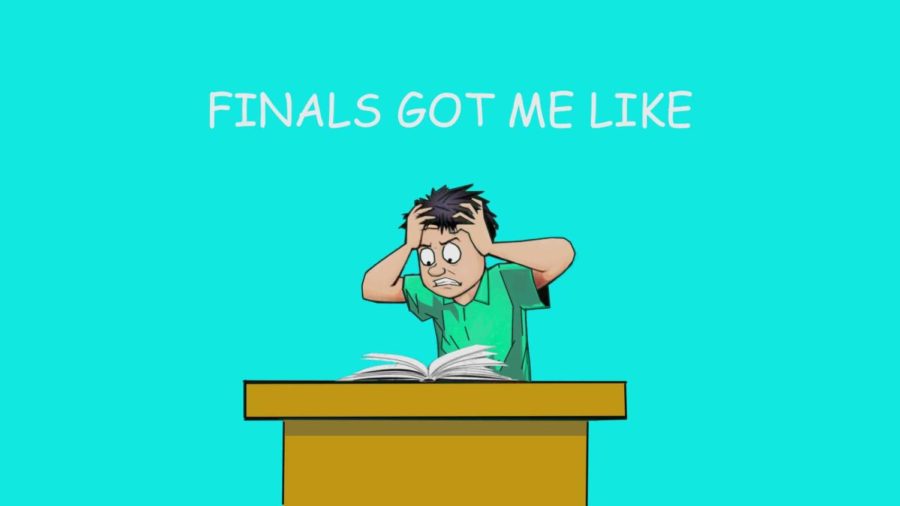 The humble essay. The written word exhausted into seven to eight double-spaced, 12-point Times New Roman-font pages with MLA citations. The parading of all academic knowledge accumulated over the course of the semester.

It is Monday. I still have two essays to write. But instead of writing essays, I decided to write about complaining about writing essays, because humor is only slightly less exhausting than serious, thesis-driven essays.

I am very tired. I know that I am tired because I do not sleep enough. I don’t have to hit up my one STEM major friend to learn that — especially considering that if I did, all I would learn is that they’re more tired than I am and that I should stop complaining, which is ludicrous. I have yawned many times while searching through my ebook of “Everything Flows” for quotes on nationalism and objective truth, now beyond caring to cover my mouth as I do so. I’ve only eaten bagels for the past three days because that’s all I bought at the grocery store. My body is rebelling, and it absolutely deserves to.
Despite being tired, I will take 30-minute breaks every hour or so to watch eyeshadow palette declutter videos on YouTube because I’m deeply nosy and it pleases me to know what other people are getting rid of and judge them on their choices. I no longer have the time, energy or talent it takes to put some cool toned brown on my eyelids to feign liveliness, but my lax brain is still deeply intrigued by this most supreme of time wasters.
I will not become less tired if I do not get out of bed. No great work has ever been accomplished in a robe. My brain, with its nine-to-five sensibility and its inclination to email back and forth passive aggressively and recommend podcasts to others, likes the idea of a dedicated workplace. Therefore, I must go to the library.
As silly as it feels, I would not recommend putting a 30-minute timer on yourself while working. The presence of “timer – Google Search” as one of my tabs, just ticking away as I write, instills the proper amount of consequenceless anxiety I need to actually accomplish work. Then I remember that I used to do this to the third graders I mentored in high school — back when I was so constantly exhausted and so dedicated to looking otherwise that I barely even noticed it — when they had to do multiplication worksheets. Try as we might, we are all just third graders and the world is nothing more than a series of multiplication worksheets.
I deserve a non-bagel meal. I will go to Dunkin’ Donuts and buy a breakfast sandwich and coffee. I’m thinking a lot about that girl last year, with the veggie lasagna, but I know that a veggie lasagna isn’t what the body wants, though it needs it. It wants a sausage, egg and cheese on a croissant and probably another iced coffee with peppermint mocha syrup.
If anyone out there’s reading this, feel free to bring me a sausage, egg and cheese on a croissant or an iced coffee with peppermint mocha syrup. Thank you in advance.
As much as I’d like to complain, at least it’s not an exam. I think Scantron tests force all the knowledge out of my brain, leaving me with only an understanding of fine dining and breathing, unable to remember my own name.
I just tried to write “much” and wrote “mutch” because I suppose at this point the English language is just putting sounds together for me. I just wrote “mutch” and stared at it, stared at its jagged red underline, parsing through my 21 years of life, trying to discern all the times I’ve used the word “much” to understand what was wrong with “mutch.” The written word was never my sword to yield.
I do not know if I’m just old, but back in my day, there was no talking on the fourth floor. I remember going to the fourth floor to do the only assignment I ever received in PSYCH 0010 when I had a cough, and I got nasty looks from just coughing a couple times. And they were right to look nastily. Kids these days just complain about their boyfriends out in the open, in the broad what-should-be-daylight at 5 p.m.
However, and I always say this — to the point where if I were a doll with one of those little strings you pull to make it talk, this would be my pre-recorded phrase — I think you should dump him, Loud Girl. I don’t know him, but he’s probably not worth it.
I just sneezed. The girl across the table from me doesn’t say bless you. I know she heard me. I know she saw me sneeze. I look at her. She has no response. I don’t know if she didn’t hear me or if she doesn’t care about my sneeze. Either way, I understand her on a spiritual plane, though her lack of response makes me anxious about the space I occupy in this world.
The absolute nerve it takes to talk on the phone while I’m writing what could be the next installment of “War and Peace” or the next great American novel, as I type, leaving F. Scott Fitzgerald’s maggot-ravaged body shivering under the lightly packed earth. The absolute nerve. I do not care about the mac and cheese you ate. I have five hours of sleep and an unhealthy second wind of confidence in my writing. Hang up your phone. Denounce your friends. Become a recluse. God, it’s not that hard, folks.