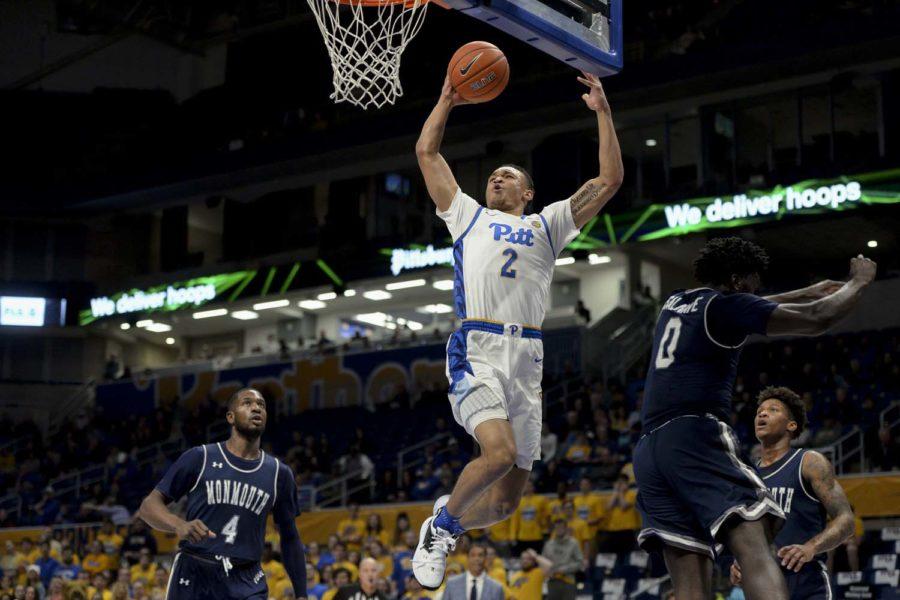 Sophomore guard Trey McGowens (2) goes up for a dunk during Pitt’s 63-50 victory over Monmouth.

Metal plus time equals rust. And when you leave a basketball team to rest in the Steel City for 10 days, they’re bound to develop some rust as well. Finals week kept Pitt men’s basketball idle for ten days before hosting Northern Illinois on Monday night.

Both the Panthers (8-3, 1-1 ACC) and Huskies (6-5, 0-0 MAC) were coming off of extended breaks and it showed. They shot a combined 4-17 from the field though the first four minutes of play. But both teams got reinforcements as the week’s sluggishness wore off.

For Pitt, sophomore guard Trey McGowens didn’t start for the first time since March, but thrived in his reserve role. He made his first three shots and finished with 18 points, three rebounds and three assists.

But the Huskies were powered by outlandish 3-point shooting. They shot 40% from distance in the opening period and were led by the tough shot making ability of senior guard Eugene German, who nailed a trio of 3-pointers from ridiculous distance to make up the lion’s share of his 13 points in the first half.

NIU led by as many as six in the first half, but the Panthers slowly chipped away thanks to the offense of their big men. Graduate Eric Hamilton and junior Terrell Brown scored six of Pitt’s 13 points to close the half and a McGowens 3-pointer trimmed the NIU lead to one at intermission.

The Panthers also capitalized on Huskie miscues, scoring 14 points off of 15 first-half turnovers for NIU.

After halftime, the Huskies kept Pitt at a comfortable distance and even extended their lead to as many as seven on two occasions. But Jeff Capel switched up his defense to contain German’s hot shooting.

An extended 2-3 zone defense was employed to put pressure on NIU’s shooters and proved vital to Pitt’s second half surge. The Huskies shot 1-13 on 3-pointers in the second half, opening the door for the Panthers to strike.

With 6:11 remaining in regulation and NIU leading by six, sophomore forward Au’Diese Toney nailed a 2-point jumper and sparked a 15-0 closing run that secured the win for Pitt.

Hamilton and first-year forward Justin Champagnie combined for 10 points over the final six minutes and bookended a dagger 3-pointer from McGowens with 53 seconds remaining. After one stop the Panthers would dribble out the clock and breathe a sigh of relief.

German carried the load offensively for NIU with 18 points on 7-18 shooting from the floor. No other Huskie reached in double figure scoring.

The Panthers get another five days of rest before welcoming Binghammton on Saturday night. Tip-off is scheduled for 7p.m. and will be broadcast on the ACC Network.