Hope, expectations and the dilemma of Pitt football 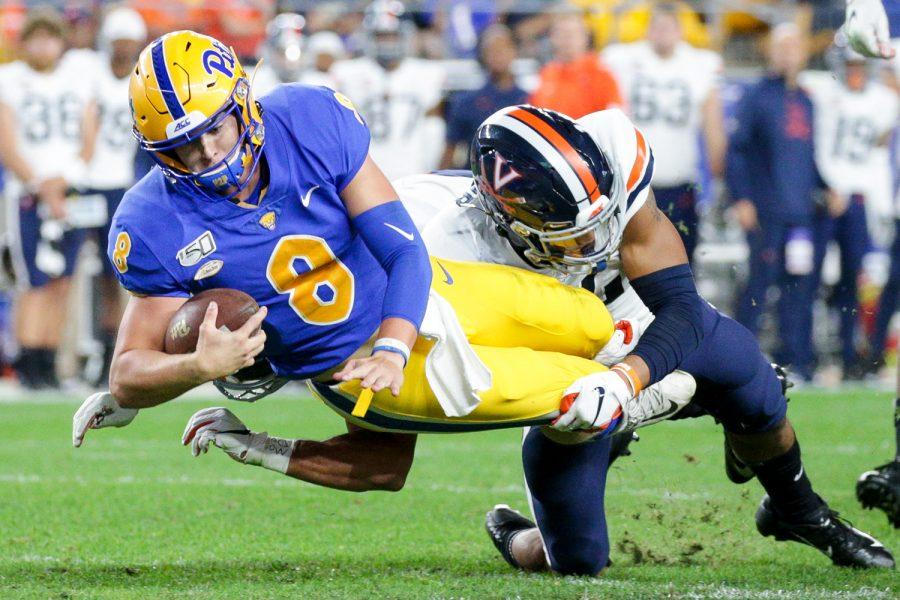 Pitt football hasn’t reached a season above eight wins since 2009.

Pitt football wrapped up its season on Dec. 26 with a 34-30 victory over Eastern Michigan in the Quick Lane Bowl. As in the Panthers’ previous games this season against FCS Delaware and perennial FBS powerhouse Central Florida, it took a late game-winning drive to seal the deal.

Winning the game was an objectively good thing for Pitt’s team. As the famous Herm Edwards sound bite goes, you play to win the game. The Panthers’ seniors, including standout safety Damar Hamlin and record-breaking receiver Maurice Ffrench, deserved to end their careers on top.

Yet in the same way that some celebrate moral victories, one couldn’t help but feel that Pitt had suffered a moral loss. Yes, the Panthers scored more points than their opponent. But if you watched the game with no previous knowledge, you’d have been hard-pressed to identify which team hailed from a Power Five conference, had the nation’s No. 12 overall defense and entered as a 12.5-point favorite, and which team had a losing record within the middling MAC.

For much of the game, Pitt didn’t play like a team that was eager to rebound from two disappointing losses to end the regular season. The Panthers didn’t look like they’d had three weeks to prepare, allowing 438 yards — their second-worst performance all season — from Eastern Michigan’s offense.

As the game was still happening, Chas Alecxih — who played defensive tackle at Pitt from 2008-2011 and went on to play sporadically in the NFL — expressed frustration with his former team on Twitter.

“At this point I really don’t care if we are able to win this game or not, because either way this is embarrassing,” he said. “I can’t accept that this is the new normal at Pitt.”

Alecxih’s tweet seemed to imply some sort of misguided revisionist history in which Pitt football recently resided at the pinnacle of college football and has since fallen from grace. But in reality, the Panthers have been stuck in the same place since Dan Marino graduated in 1983 — perennially floating between mediocrity and decency. Alecxih’s own Pitt career, ironically, was bookended by an infamous 3-0 Sun Bowl loss to Oregon State and a 28-6 loss to SMU in the BBVA Compass Bowl.

When Pitt lost to Boston College on Nov. 30, the Pittsburgh Post-Gazette’s Craig Meyer tweeted out a sobering statistic — among current ACC teams, only Wake Forest and North Carolina have more seasons with five or more losses during the last 30 years than Pitt’s 26. Only four times over that span have the Panthers finished the season ranked and never higher than No. 15.

Granted, not every college football program can be Alabama or Ohio State. But you’d think Pitt would have at least stumbled its way into a few elite seasons between Ronald Reagan’s second term and now. Even Rutgers — Rutgers! — had an 11-2 season and No. 12 final ranking in 2006, as well as back-to-back nine-win seasons in 2011 and 2012.

Coming into this season, the Panthers weren’t projected to be world-beaters. The Pitt News correctly predicted they would finish the regular season with a 7-5 record, while the ACC media pegged them to finish fourth in the Coastal. Pitt did them one better, finishing third in the Coastal and ending the season with a bowl win.

So why, then, is there a nagging feeling that the Panthers should’ve done more?

This effect can be aptly described by a quote from Red in “Shawshank Redemption”: “Hope is a dangerous thing. Hope can drive a man insane.”

Pitt football has mastered the art of manipulating expectations and hope, and this season was no different. The Panthers came out looking flat in an opening loss to Virginia, only to turn around and come within inches of taking Penn State to overtime and then rattle off four straight wins, including an awe-inspiring win over No. 15 UCF.

After wins over Georgia Tech and UNC, Pitt stood at 4-2 in the conference and 7-3 overall. A nine-win season for the first time in 10 years seemed within reach, as did a trip to the Orange Bowl. Even the most nihilistic of Panther fans couldn’t help but get their hopes up.

And then reality came crashing down.

The Panthers got obliterated at Virginia Tech and fell on senior night to an average Boston College team before limping to victory over long-time college football doormat Eastern Michigan in a Tier II bowl.

The result was still a formidable 8-5 overall record. But not all 8-5 records are created equal. By many offensive metrics, for example, Pitt was among the worst teams teams in college football, finishing worse than 100th out of 130 FBS teams in points per game, red zone scoring percentage and rushing yards per game.

Most worrisome of all was the fact that head coach Pat Narduzzi brought in offensive coordinator Mark Whipple, the reputed quarterback whisperer, to streamline the passing game. But instead of implementing an effective Air Raid attack, the result was more of an Air Crawl.

Despite averaging the seventh-most pass attempts per game in the country, Pitt ranked 117th nationally with 10.7 yards per completion — actually down from last year’s 11 yards. Junior quarterback Kenny Pickett ranked 96th with a passer rating of 122.4, not a major improvement from last year’s 120.3.

On the flip side, Pitt’s defense proved to be one of the nation’s best, allowing just 4.4 yards per play — fourth behind three top-five teams — and leading the country with 3.92 sacks per game.

The optimist will point out that Pitt is bringing back most of its production next year and should be among the ACC’s best teams. Defensive studs Jalen Twyman, Paris Ford and Patrick Jones II all eschewed the NFL draft for another run in 2020, while Pickett returns for his senior season and should feel fully comfortable with Whipple’s system.

To add fuel to the hype fire, Narduzzi signed Pitt’s best recruiting class in years, complete with several first-year players who will contribute right away. Plus, the Panthers will have the easiest schedule they’ve had in recent memory, with nine wins looking like a realistic goal for next season’s squad.

The realist, however, will counter by pointing out that time has been a flat circle for Pitt football over the past 30 years. The Panthers have had teams brimming with returning talent, they’ve brought in stellar recruiting classes and had numerous players blossom at the NFL level. Yet they’ve finished nearly every season the same — unranked and with at least five losses.

Perhaps 2020 is the year the Panthers finally break into the rankings. Maybe they’ll figure things out on both sides of the ball instead of just one, and maybe Narduzzi will notch the nine-win season that saves his job for good.

My advice? Don’t bet the farm on it.

And if indeed Pitt cracks the eight-win barrier for the first time in a decade, it will surely find the most agonizing way to do so.