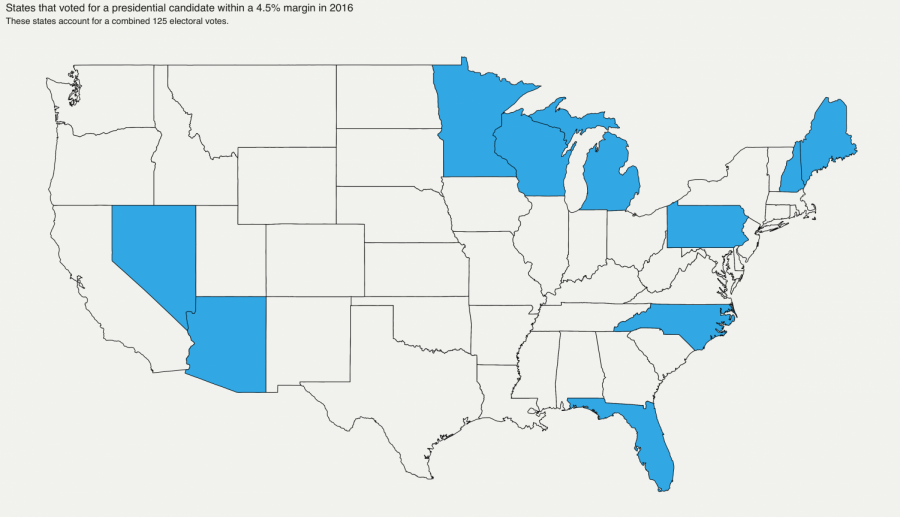 The 200,000 purged voters in Wisconsin represent 4.5% of the total voting population in the state. States decided within 4.5% in the 2016 election make up 125 electoral votes.

The United States government affirms that one of the most important American rights is the franchise, yet in the hundreds of years that our country has existed, voter suppression has never been fully eradicated.

Important decisions related to voter registration have been made in recent weeks. This past month, a federal judge backed Georgia’s removal of nearly 100,000 names from the state’s voter rolls. Similarly, the Wisconsin Elections Commission is deadlocked after a judge ordered the expunging of 200,000 voter registrations.

The debated practice of removing voters, commonly known as voter purging, occurs when states remove citizens from voter rolls in order to update registration rolls. The Wisconsin Institute for Law & Liberty — a conservative group who filed the lawsuit in support of Wisconsin’s purging — praised the decisions. Rick Esenberg, president of the institute, stressed that the purging is necessary and protected under state law. On the other hand, groups like Fair Fight Action, who was the lead plaintiff against the state of Georgia, remained against the massive purgings, which it viewed as suppressing voters’ rights. Conservative groups are right to say that some voter purging is necessary, but state governments are misusing the practice. This issue must be addressed before this November’s congressional and presidential elections.

The controversy over voter purging begins with the reasons why a citizen may be purged. Under federal law, states are required to “clean up” their registration roll by removing people before an election. Two of the main reasons a voter may be removed from the roll is because they have moved out of the state or died. In these cases, the voter can clearly no longer vote in the state, and they should be removed.

It’s important that states keep up-to-date registration lists in order to reduce inaccuracies and prevent anyone from voting twice. However, the 2018 Husted v. A. Philip Randolph Institute Supreme Court outcome reaffirmed that states were legally allowed to purge voters simply because they had not voted in recent elections and had failed to respond to a one-time mailing alerting them of this removal, within four years. By allowing these “use it or lose it” policies, the Supreme Court has allowed states to remove voters simply because they have not voted in the recent past. Citizens’ right to vote should not have an expiration date — people should be able to vote whenever they choose.

Unfortunately, the imperfections of voter purging do not stop with unjust reasons for removal. Once removed, the process to reregister is impractical. In Wisconsin, for example, the main solution is allowing citizens to “same-day register.” However, as Wisconsin Democratic Party Chair Ben Wikler explains, there is a “higher burden to proving your place of residence when you same-day register.” Those looking to same-day register need to bring more documents with them — like utility bills — so if they do not know they have been removed, there is no way for them to know they need to bring additional proof of residence.

To make matters worse, only 21 states allow same day registration. In states where citizens must register weeks in advance, like Georgia, people may not know they have been purged until they show up to cast their ballot — and by then it is too late to reregister. Conservative groups defend this, saying that notifications sent to citizens, like the one-time mail sent to Georgians, should be enough to inform them of the purge. This goes against Congress’s own statement when passing the National Voter Registration Act, which states people should not be removed “solely due to their failure to respond to a mailing.” Failing to open one envelope shouldn’t take away someone’s right to vote.

Unnecessary voter purging does not affect all citizens in the same ways. Certain cohorts, including low-income people, young people and people of color, are disproportionately removed from voter rolls. These injustices occur for a number of reasons, such as the fact that minority voters are more likely to share names than white voters, which raises the risk of data being mixed up and accidentally being purged. Young people are more likely to move around, which similarly raises their risk of being purged. These groups tend to lean Democratic, which means purgings are unfairly suppressing votes that would’ve gone to Democrat candidates.

In states like Georgia, where the 2018 governorship election saw the narrowest margin of victory for a Republican in nearly 20 years, hundreds of thousands of Democrat-leaning purged voters could decide the fate of elections. This will certainly hold true for Wisconsin, where fewer than 23,000 votes handed President Donald Trump victory in the crucial state. With the state’s Republicans pushing for the removal of 200,000 voters, it is almost certain that some will be improperly removed. The biases of purging could impact how Wisconsin votes in 2020 presidential and congressional elections.

The goal of updating voter rolls is to keep voting efficient for all citizens, but presently, we are seeing Republicans misuse the practice in order to subdue Democrat-leaning groups. Partisan suppressionary efforts should not keep citizens from exercising their right to vote, and they should certainly not impact elections. As we approach the Nov. 3 presidential election, referred to as one of the most important elections of our lifetime, citizens’ votes — not conservative politicians and organizations — should determine our nation’s future.