Macavity, Macavity // This movie is depravity 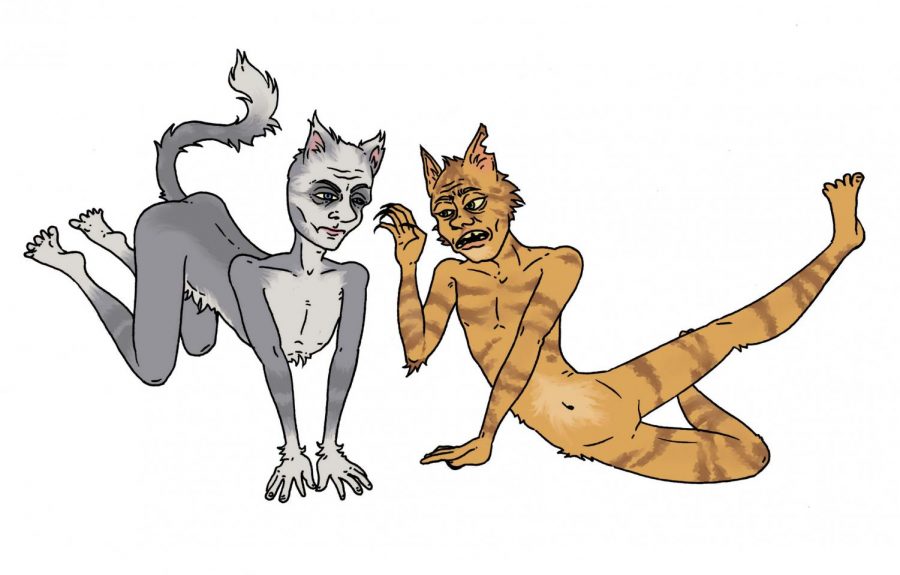 This story is part of a two-part review of the movie “Cats.” Read part 1 here.

What do you get when you cross Pittsburgh’s annual furry convention with an uninspiring cohort of vain and vacuous celebrities? Tom Hooper’s new “Cats” movie.

We saw the trailer in July, and the world collectively coughed up a hair ball. Littering the screen were images of fur-covered mutant cat-human-CGI aliens — actors’ faces plastered onto cat bodies with distinctly human fingers, toes and, not to mention, butts. Some, bafflingly, donned fur suits over their “normal” CGI-grafted fur.

But surely, at some point in the full movie, you get used to the gyrating humanoid monstrosities, right? Whispers of hope punctuated the widespread derision in the trailer’s comments section. After all, “Cats” has always had a penchant for weirdness — from distinctly feline sensuality, to bizarre lingo and a virtually plotless structure.

Since the musical became an unprecedented smash hit in the early 1980s, it has elicited mixed reviews from audiences and critics. A 1982 New York Times review pointed to the “entire show’s lack of spine.”

“If you blink, you’ll miss the plot,” the review continues.

But to say I’m not feline Hooper’s “Cats” movie would be a gross understatement. One would think that, with a runtime of two hours, the film couldn’t possibly sustain the trailer’s level of grotesque imagery for its entire duration. But it was quite possibly the scariest horror movie in 2019, and a film as banal as it is frightful.

Hooper makes a decent effort to add to the movie’s plot, shaping Victoria (Francesca Hayward), an inconsequential character in the theater production, into a main character in the film. At the beginning, Victoria’s owner unceremoniously dumps her into the back alleys of London where the so-called Jellicle cats reside. Once there, she witnesses something akin to the plot of an early season of American Idol.

Most cats introduce themselves through a sung audition, all in the hope that Old Deuteronomy will make them the “Jellicle choice” — the cat destined to ascend to the cat heaven they call the Heaviside Layer and be reborn into a new life, hopefully with better movies. If only Simon Cowell dismissed abysmal contestants by telling them “you will never be my Jellicle choice.” The quality of the auditions waver — mostly due to the cast’s questionable musical talent — and it’s all capped off with a regrettably pedestrian performance by the usually lights-out Jennifer Hudson.

With such creepy imagery throughout, the burden falls on cast members to animate the nightscape, to infuse an otherwise lifeless disasterpiece with a lively, affable quality. But most actors fall disappointingly flat.

Taylor Swift doesn’t exactly bomb as Bombalurina, the criminal Macavity’s (Idris Elba) trusted partner. She glides into her audition on a glowing crescent moon, sporting a cringey faux-British accent, wooden theatrics and a piercing pop star voice. It’s not bad, just profoundly mediocre. Why not put a spotlight on a talented unknown who’s endured years of theatrical training instead of handing the role to an average pop star greedy for more glory? A career low for Swift, with a massive opportunity cost.

Faring even worse are more A-list stars — Rebel Wilson as the lazy, lumbering Jennyanydots, and James Corden, the morbidly obese Bustopher Jones who spends an entire sequence rummaging through trash cans and rolling around in a pile of litter. Wilson’s number actually contains a dancing line of tiny human-faced cockroaches, which will leave you wincing at the screen like Rum Tum Tugger (Jason Derulo) after he finishes a hypersexualized rendition of his own song. One has to wonder if the actors know what they’ve gotten themselves into.

The film offers one noteworthy performance — Hayward, of the Royal Ballet, making her acting debut. She’s a delight to watch — singing, dancing and pirouetting beautifully through every number. Her rendition of “Beautiful Ghosts,” the original song cowritten by Swift and Andrew Lloyd Webber, was perhaps the best musical number of the film, and an effective lead-up to Hudson’s signature “Memory.” It’s a shame, after a promising breakout performance, that this movie will probably damn Hayward’s career prospects for the near future.

Had Hooper cast more Haywards, the movie could’ve been a hit just like the musical, but he was baited by spectacle. The arrogance of Hooper to cheapen a classic musical with A-list celebrities, to hijack it with recoil-worthy CGI. He and his band of cronies got exactly what they deserved — a $70 million loss at the box office, or, as I’m sure he’ll rename it, the litter box office.